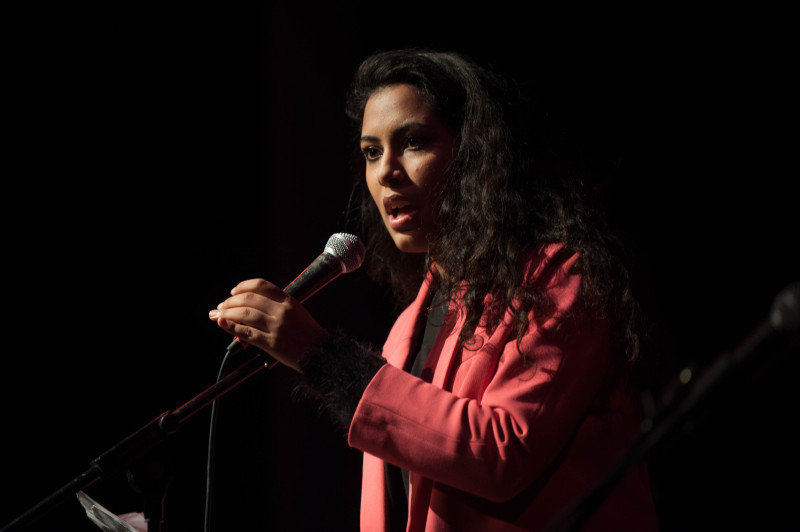 Identity, the theme of the SLAMbassadors competition, is an enormous and generous theme which affords plenty of room for interpretation. Entries can cover a wide range of issues such as racism, sexism and gang culture, as well as more personal poems about growing up between two cultures, or a first-hand experience of a war that destroyed a young poet’s homeland and culture. It can also be a fully positive celebratory piece. We are looking for new voices and new perspectives. It is about who you are, where you have come from, what you see around you and how it affects you and others: national identity, cultural identity and human identity.

Poetry- whether it is in free verse form or rap / hip-hop- needs to be honest. Encourage your young poets to write about what they know, understand and have a passion to communicate. This can take the form of a direct political poem or it can reflect a moment of personal experience. Some of the most effective work often combines the two.

Start with short writing exercises using a range of stimuli for inspiration. This period is largely concerned with finding the right stimuli for the participant, their springboard into ideas and images that will make up the heart of their poem. All initial writing exercises should be timed, so that the participant writes in a free yet concentrated way. The exercises are unlikely to create complete poems, but are designed to release the inspiration that does lead to original and powerful work. We would also advise the workshop leader/ teacher to participate in the exercises themselves – this will not only give you shared experience, but also give you some creative time and allow the class to witness your successes and challenges as well as their own. It impresses upon them that there is no real ‘right’ or ‘wrong’ in poetry, just evolutionary steps.

Try using images such as photos, magazine clippings or postcards as a stimulus for writing. Much depends on the image(s) you choose to use with your class, so select carefully. Choose images that portray strong and suggestive images. Once you have the image, ask them a series of questions: what is happening in this picture? What is happening just outside the image? What is the subject looking at? What is about to happen? Get them to write in a stream of consciousness method without a break. They can use their associated ideas to begin work on a poem.

Play a piece of music without words and encourage the class to write down the story of it. Encourage them to close their eyes while they listen. What happens in the music, what is it about? They may choose to simply write down a series of words that articulate the music, or images that the music evokes. They may also use the music as a template for the impersonation of sounds if they are working in rap or polyvocal poetry (see below for definition) that uses rhythm or beat box.

If using a piece of music with words: select a piece that is accompanied by strong lyrics – it is probably better to choose a track that will be unknown to the participants so they are not led by their knowledge of the performer/ band. Play the track three times and ask them to write notes as it is playing. After the third run through, ask them to continue the lyrics. You may also suggest that they change the meaning of the song, wrestle control of the poem. Once they have worked on this, they can play with making the piece independent so that it stands alone without music. They may find that they veer away from the confines of the exercise, and write a completely unrelated piece. This does not matter: the purpose is to get them to think and write. As a general note, be aware that there is more music that is lyric-based than rap or hip-hop, and you may find using a couple of clashing styles productive.

From a poem: read out the first line of a poem, the less well known the better. Ask the young poets to continue the poem for a set period of time, no more than 10 minutes. In the initial stages they should simply write freely and not worry too much about the structure of the poem. They should be looking for the ideas, images and original lines of poetry that will catapult them into an entirely original piece. Once they have collected a few images and sentences they can begin working on them in a more structured way. They may choose one particularly strong image/line and use that as the basis for another poem. They may choose to leave the poem as it is, and simply replace the first line.

From a newspaper/ magazine: This exercise can be approached in two ways. Either read out the whole of an article (remembering to select one that is in some way connected to the theme of ‘respect’) asking them to write a response to or continuation of it, or ask them to summarise the article in a poem. Once they have done this, encourage them to inhabit the poem, to give it a name and body, a personality. See ‘Method Writing’, below.

This is an exercise aimed at encouraging the participant to inhabit an issue-based poem. For example, you may talk with your poets about a case in the news, or any other issue that you think is relevant to your students. Once you have discussed the case (get them to take notes of anything raised that they feel passionate about) ask them to write a poetic interpretation of it. Once they have done that, ask each of them to imagine that they are the subject of the news story. What does it feel like? What can you see? What does it taste, feel, and smell like? Is there anybody else there? The questions are infinite. Good writing is in the detail: it helps the listener/ reader to recognise the humanity of the poem and can therefore make it a more dynamic piece. It gives a face to the issue, the argument.

Take in a poem that is written in a language that they are unlikely to understand and are unfamiliar with. Give each of your participants a copy of the poem, and ask them to translate it individually line by line.

Naturally, they won’t understand a word of the original text but they can make guesses. In this way a poem creeps up behind the young writer. You may want to flavour their interpretation by giving some background information about the poet or the poem, or you may want to concoct a completely false history.

You can also encourage EAL students to write a bi-lingual piece. Each line can be written and spoken in their first language and followed by an English translation, for example:
Line in Ndebele
Line in English
Line in Ndebele
Line in English
… etc
The fusion of languages can not only sound incredible but will help to develop the poet’s understanding of English and evolve their vocabulary. It also stands to increase their confidence inside school and out.

Once a poem is written: performance stimulus

Much of the fear associated with live performance will be substantially reduced by accepting entries via camcorder and mobile phone. The poet can stop and start as many times as s/he likes until they have the perfect moment captured. Please make sure that they last no more than one minute however, as we won’t be able to watch the video beyond the time limit.

Some of your students may want to take part but may not feel comfortable – for religious or personal reasons – about being filmed and then uploaded to an international website. Let them know that they do not necessarily have to show their faces: they could film artistic shots of their hands, feet, perhaps even more scenic backdrops. The words are the most important element at this stage. However, remember that they may be asked to take part in a live event – and may even win!

Try and fuse together 2 or 3 poets’ work– perhaps linked by sung piece or a regular chant. This works well with beatbox and rap as well as free verse poetry. Explore fully what can be achieved with your voices once the poems are written.

Tips to offer to pupils before performing