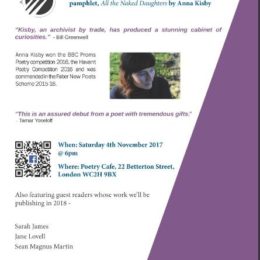 A new poetry press has been created by poets Abegail Morely (Forward Prize shortlisted for her first collection, her new collection is The Skin Diary by Nine Arches Press), Karen Dennison & Jessica Mookherjee. The Press is called “Against the Grain Poetry Press” and will specialise in beautifully created pamphlets by exciting poets. Our first pamphlet is the Debut of Anna Kisby. Anna Kisby is an archivist and mother of three, living in Brighton. After growing up in London she studied Literature and Film at the universities of East Anglia, Sussex and the Sorbonne, taught English in Prague and sold cowboy boots in Massachusetts. Her poetry has appeared in anthologies and magazines including Magma, Mslexia and The Moth and been placed in competitions. Recently she won The New Writer single poem prize and was a finalist in Live Canon 2012. In 2016 she won the BBC Proms Poetry competition, The Havent Poetry competition and was commended in the Faber New Poets scheme. We are delighted to launch her debut pamphlet “All the Naked Daughters” at the Poetry Café on the 4nd November 2017 at 6pm. The evening will also feature 3 of our poets who we will be publishing in 2018. We are pleased to introduce Sarah James, Jane Lovell (2017 winner of the BBC Proms Poetry competition) and Sean Magnus Martin. They will be supporting Anna at her debut and we will be launching their work at the Poetry Café in 2018. We would like people to celebrate the launch of our new press, Anna’s debut and listen to some beautiful new voices. The event is Free (donations are welcome). We would like people to arrive at 6pm and we will start at 6.30 with a break at 7.30 for refreshments after which you will hear all our Against the Grain poets read. Signed copies of the book will be available on the night.