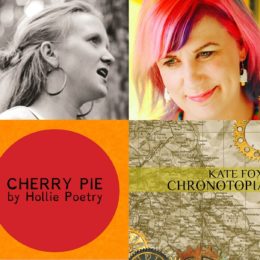 Hollie McNish won the Ted Hughes prize for new work in poetry with her poetic memoir from the frontline of motherhood, Nobody Told Me. Channel 4 broadcast a poem from it: Embarrassed, an anthem for breastfeeding in public. Cherry Pie includes Mathematics which was viewed over 2 million times on YouTube. Hollie is currently touring with her latest book, Plum.

Stand-up poet Kate Fox finds being funny and Northern can help or hinder – she’s doing a PhD about why. Familiar to Radio 4 listeners from two series of The Price of Happiness and as one of the Saturday Live Poets, Kate’s currently making Lass War on the Northern Powerhouse. Chronotopia is full of poems which come from in between classes and places and genres and times.

Keith Jarrett is a poetry slam champion in London, UK and Brazil and was a semi-finalist at the World Cup Slam in Paris. He was one of the pioneers of the Spoken Word Educator programme at Goldsmith’s and is now studying for a PhD at both Birkbeck and SOAS universities. The poems in his debut collection, Selah, are songs that testify, praise, lament and pray.

Burning Eye Books think of themselves as an upstart indie punk publishing company, specialising in promoting spoken word artists. They aim to dispel the assumption that performance poetry does not transfer well to the page and look for the bold, the fearless and the strange.