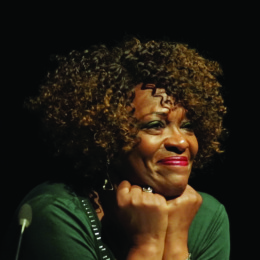 Rita Dove – ‘How does a shadow shine? Poetry, Music & the Underside of History’

Rita Dove, Pulitzer Prize winner and former US Poet Laureate, will give the 2015 Poetry Society Annual Lecture.  Tickets are free but must be reserved. Book your place at the Liverpool University Eventbrite.

This is a tale of light and shadow,
What we hear and the silence that follows.
Rita Dove, ‘Sonata Mulattica’

Rita Dove made history when she became the first African-American Poet Laureate. In this lecture, she will look at the poet’s role in re-shaping, reframing and reimagining history, interweaving her talk with poems.

Her tale begins with what might have remained a footnote in musical history – the fact that Beethoven’s Kreutzer Sonata, his Violin Sonata No.9, was originally titled ‘Sonata Mulattica’, and composed in honour of a now-forgotten musical wunderkind, a ‘mulatto’ virtuoso violinist called George Bridgetower.

For her own lyric narrative, Sonata Mulattica, Dove has pieced together Bridgetower’s story, with its underlying theme of racism. Born in Poland around 1780, the son of a white European mother and a black self-styled ‘African Prince’, Bridgetower was discovered by Haydn and eventually brought to England to entertain the Prince of Wales. In 1803, while visiting Vienna, the young violinist caught the ear and admiration of Beethoven, who composed his most famous sonata for him. Bridgetower premiered it with the composer at the piano. Soon after, however, Beethoven retracted his dedication, and Bridgetower slipped from fame.

Exploring the intersection between history and imagination, Dove describes how she reconstructed Bridgetower’s life, working from historical sources and filling in the gaps. “Poetry is not about biographical truth, it’s about an emotional truth,” explains Dove. Being wrapped up in facts, is to be trapped by facts. The poet needs to fantasise, speculate, and “eavesdrop on the gods”. Discussing how poetry can pull lives from the shadows, Dove will also reflect on earlier work, such as her Pulitzer Prize-winning collection Thomas and Beulah, a verse cycle loosely based on her grandparents.

Editing The Penguin Anthology of Twentieth-Century American Poetry has been another opportunity to re-vision history, and choose from the cacophony of competing claims, which stories are important. Discussing the politics of selection, the influence of “a largely whitewashed poetry establishment”, and the struggle of the poor, the nonwhite and the female to be heard, Dove analyses her anthology’s attempts to answer the essential questions: “Is this a voice that will be remembered? Did he or she make an impact that mattered?”

Rita Dove is a former U.S. Poet Laureate (1993-1995) and recipient of the 1987 Pulitzer Prize in poetry for her book, Thomas and Beulah. Her most recent poetry collections are Sonata Mulattica(2009) and American Smooth (2004), and she is sole editor of The Penguin Anthology of Twentieth-Century American Poetry (2011). She is Commonwealth Professor of English at the University of Virginia.

Tickets are free but must be reserved. Book your place at the Liverpool University Eventbrite.