Skip to content
Home >Book review: One to another
News About Search Donate Shop 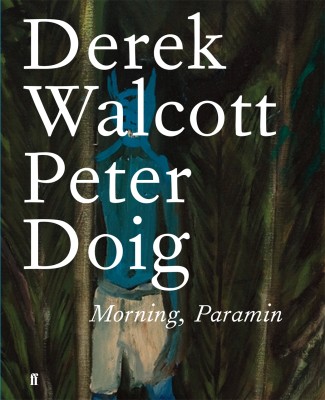 All poetry is a form of conversation: with a cloud, a flower, the  landscape, the world, the self. These two dual-authored collections are dialogic, one taking place between poet and painter, the other poet to poet.

Morning, Paramin is an exquisite, if formally conventional artefact, and its layout is consistent: painting, poem, painting, poem, with the poems predominantly taking their titles from the artworks, echoing a tradition of call and response. Walcott explores this process as well as the images, alongside the relationship between visual art and writing, as distinct yet connected practices, more perhaps as in-laws than cousins. “Drawing is a sort of duplicity”, he writes in ‘Figure in Mountain Landscape’ – a painting of an artist sketching – where the blurred edges of a human wearing a peaked hood resemble and coalesce with the terrain, the human acting as bridge between background and foreground.

Doubling emerges elsewhere, along with colour, as motif and analogy, as in for example ‘100 Years Ago (Carrera)’, which Doig dates to 2001:

The canoe is a hyphen between centuries,
between generations, between trees.

The canoe is an emblem of precolonial island cultures and both Doig and Walcott are resident in the Caribbean: Walcott in his native St Lucia and Doig in Trinidad. Both have amplified and expanded the ways in which the postcolonial landscape is portrayed in a modern context and Walcott’s legacy is one that has enriched the language and discourse through which the reader might embrace the region’s history and resilience as a hybridised environment. In ‘Moruga’, the village Columbus is said to have sighted on Discovery Day,

Everything has been thoroughly rehearsed.
Doig paints it for what it is: a fable.
Columbus never set foot here, but what is
important is the fact that the cross-tree took root
and spread from here its vile or virtuous practice.

One of the more mystical experiences of my life was seeing the Blue Devils descend from the mountain mist at dusk in Paramin, the king shackled to an imp and dressed as an S&M gimp. This was carnival masquerade at its most profound and its most figurative: where the intersections between African religious rite, Christianity, folklore and a choreographed improvisation of the psychosexual and cultural violence of slavery and rebellion mingle and fuse. Although this is the pairing from which the collection takes its title, the painting and the poem themselves are untitled – and conversely Walcott characterises “our island’s heredity as night”, not as the white marble “amputations of De Chirico” in what amounts to an aesthetic critique of a dichotomous Western canon.

No societal depiction of the West Indies – and I use this term in context – could be complete without cricket. “O the lovely vehemence of that right arm!” Walcott exclaims in ‘Paragon’. Humour has its place in other poems too, as in ‘Metropolitain’, a celebration of intoxication. Here the speaker finds himself “in a circle of stones in a post-colonial / epoch” – a place where “to be drunk with an accent, c’est meilleur”, (a phrase that conveniently provides a neat half-rhyme with “Baudelaire”).

Later in the book there is a shift towards a more intimate, epistolary note, appropriate to the friendship between the two men, as in ‘Santa Cruz II’:

[…] what the road allows is
Trinidadian in every feature:
murderous traffic, may you use
great love and care with your own daughters, Peter.

White Egrets is in part an ecological mapping of St Lucia and this strand of Walcott’s politics endures. In the eight lines of ‘Pelican Island’ we learn from Robert Devaux, “a lovely man who loved the island”, that all the pelicans have been wiped out by insecticides. As the aphoristic closure of the ensuing poem ‘Pelican Man’ concludes:

We have done things to nature in our time.
The victim may be missing, but not the crime. 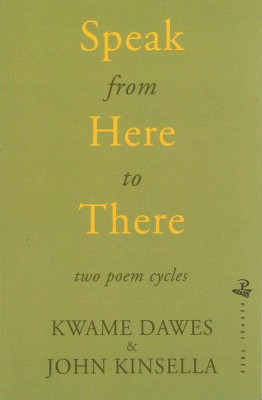 Environmental activism has long been a trademark of John Kinsella whose collaboration with the Jamaican-Ghanaian poet Kwame Dawes Speak from Here to There: Two Poem Cycles boomerangs cross-continent from Western Australia to Nebraska where Dawes is the Chancellor’s Professor of English at the university.

This is an exchange rich in contrasts and parallels: “the snow falling on your day counterpoints the ash / of burnt offerings that has coated the denials of here” writes Kinsella, from “the dead of summer” (‘9’), a pronouncement that propels Dawes away from the biting Midwestern winter back to the Caribbean via the Kingston of his native Jamaica and Kamau Brathwaite’s “shady backyard in Barbados” (‘10’). When Dawes writes of “the petty politics / of race in civil universities” and a “small Indian woman”, who is “deported by this monstrous machine”, Kinsella responds with the “stress in renewing a visa so one can regain entry into / the country where my son was born”. Throughout the cycle’s correspondence, and as one would expect of two politically attentive poets, the daily antagonisms of aggressive global neoliberal capitalism, bigotry and the colonial inheritance are documented, ruminated and shared, via historical and contemporary literatures, music, history and personal accounts.

There are many autobiographical confidences in the poems, a trope typical to the epistle. The letter poem is a form that elicits both the immediacy of direct address and a certain intimate meandering that captures the quotidian alongside the seemingly obscure in terms of subject and thematic field. Kinsella’s partner of twenty-two years, Tracy, is admitted to hospital, while Dawes writes frankly of his twenty-five-year marriage with Lorna. News of the suicide of a family friend underscores a contemplation of hereditary blindness for Dawes; Kinsella’s response includes a memory of pawning the Complete Oxford English Dictionary at Cash Converters while he was an addict, grateful that the broker “turned a blind eye” (‘63’) and gave him a decent price. Both poets are rigorous in their processing of the self, its literary renditions and relationship to the locale, although unlike a posthumously published correspondence, this is not a belated exposure of privacy; the poems are aware of their future in the public domain, although they wear this prescience lightly enough. If anything, it provokes a sense of responsibility, in terms of how material is presented and processed.

At one point both poets interrogate masculinity, the trajectory of Kinsella’s remembered account of his “addictions raging” alongside the relationship both men have with their fathers, their children, families and each other. The privileges of gender are all examined under the microscope of poetics, as are the pressures and fissures of racial violence as it erupts across America and Australia. An excavation of the inner emotional landscape is set against a broader, philosophical and psychoanalytic backdrop: “[…] That’s the failure of twentieth- / century-and-after explorations of subjectivity, those excuses / to look into the self without responsibility, a kind of displacement”, Kinsella declares.

Formally, the poem cycles shift between couplets, tercets, paragraphed verses and longer lineated blocks. While some sort of uniformity followed by each might have made it easier for the reader to instantly identify the speaker, these variations privilege the voice, and the moment, so that each poem holds as an individual entity. All are lineated, and all work within the structural paradigms of poetry as opposed to prose. At times, one poet will pick up on a comet-tail of an idea, subject or metaphorical thread and weave it into the reply, riffing off the piece that precedes it, not unlike the echoes and repetitions of the sonnet corona.

Like Walcott, who as the (not uncontested) literary monarch of the Caribbean is never far from the peripheries of Dawes’s vision, Dawes initiates a consideration of the particularities of ageing, mortality and its attendant disillusions, aches and desires – both physical and emotional. This is a narrative strand that Dawes and Kinsella, being contemporaries, develop throughout. Yet there is a warmth and a reassurance too, in the correspondence itself, between a black man almost but not quite marooned in the white of America’s Midwest, and a white man negotiating his own exile from the vast physical and historical dissonance of Western Australia, that builds towards a sense of urgency:

And this is why I read your anguish
at the brutality of then tearing apart now,
the falsehoods of allotting to history
what we suppose, what we conclude […]
This is why I have no nation, Kwame.    (‘124’)

This written by Kinsella, who receives the following response:

“This rass country woulda rass
to hell!” This is how an ancient
warrior breaks into a new wisdom,
the muscle of his supreme compassion,
despite the amassed dead […]    (‘125’)

But there is, in the end, a salve, as the book and its chronologies provoke an inevitable closure: “This is a kind of comfort, too”, says Dawes, “friendship / and its persistence in memory and art, not so?” (‘125’), ending on the letter’s eternal syntactic invitation, the question mark. 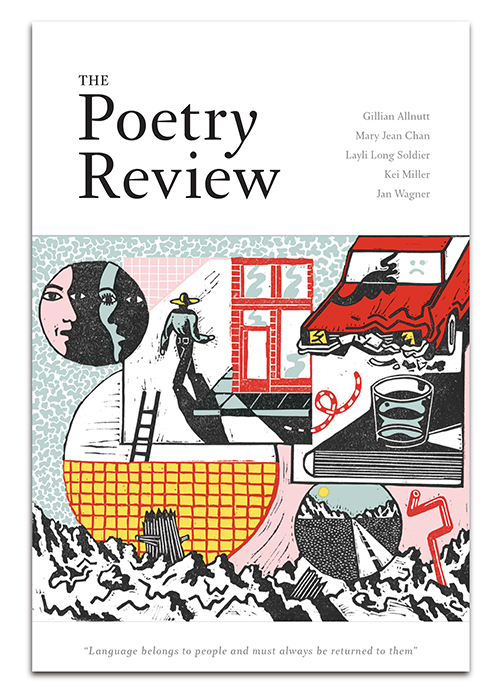 Karen McCarthy Woolf’s collection Seasonal Disturbances is forthcoming from Carcanet this year. This essay was first published in The Poetry Review, 107:1, Spring 2017. © The Poetry Review and the author.