You would recognise that hook nose anywhere,
his hump and paunch, the shiny pink erection of his chin.
Withered, crossed legs on the barstool
dangle like transplants from a much smaller body.
He could have found his ideal slot in the Gestapo,
been a dab hand with a blinding iron.
And the scold’s bridal would have been right up his Strasse.
He has, they say, killed seven police:
old-time rozzers on the beat
more deserving of a saucy come-on from the street girls
than the last rites down a back alley.
And two wives. Poor old Mrs Punch finally copped it
one night after he’d done a few dozen barley wines
and as many double gins. She fought fiercely
against an assailant or assailants unknown
the Pall Mall Gazette reported.  Never caught.
Never charged. And pretty little Mrs Punch
number two won’t be taking a bath
in those bubbles again. That’s the way to do it!
Just picture him afterwards, cock in hand
like an old chimp with a hard, green-tipped banana.
And the baby, where’s the baby?
It’s something to make the Devil into the good guy:
how children cry out for him
to drag Punch down to hell for eternal punishment.
But he’d throttle Lucifer when his back was turned
and be back on that stool for closing time.
Or maybe that’s where he’s been all these years
of grown-up sleep, peaceful and free of nightmare.
It’s what you can’t see in the stare of his wooden yellow eye.
Don’t look, there’s his stick, the awful stick! 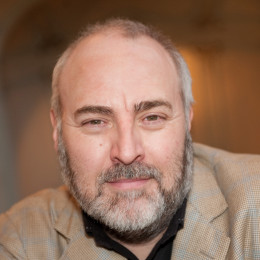 John Stammers's first collection, Panoramic Lounge Bar (2001), won the Forward Prize for Best First Collection 2001, and was shortlisted for the Whitbread Poetry Award 2001. His second collection, Stolen Love Behaviour (2005), was shortlisted for the T S Eliot Prize 2005, and the Forward Prize for Best Collection 2005, and was Poetry Book Society Choice. Stammers’s third collection, Interior Night (Picador), was published in 2010. He won third prize in the National Poetry Competition 2009 for his poem 'Mr Punch in Soho'.