I’d only set out that afternoon to scout for bees.
Father kept an eye on the cows. With my two jam jars
down a bendy trail I tramped through dunes, far from the houses.
The broken hive had been empty my twelve years.

Waves seemed set to run and run, finding the pools.
Rocky upward sprays were let go by, like a blink is.
Dozing in a fishing boat was a hush-hush friend of mother’s –
he told me: bees need flowers. Kept saying it, flowers,

busy bees. Flowers are growing beyond the trees;
he pulled me by my wrist. Though there are many ways
to tell a thing, I can’t tell, not exactly. Something stirs
and words become a swarm – their stingy tails –

I took her steps, afraid for her, like me was
somewhere else. Black hair framed his big black eyes.
Sky was still. The buckles on my scuffed familiar shoes
looked new, or strange. I heard a zipper buzz;

he called me honey, queen honey bee; I noticed the breeze.
Connection felt distorted, wrong, like sighting in shallows
the flinching hoods of jellyfish, not meant for us. My knees
scratched on shells. I counted the squawks of gulls.

I don’t go near the sand, it is billions of hexagons…
at home I was sick. Mother’s curt slap hummed in my ears
when I said his name. My head is a maze; I wake among walls,
black and yellow, sometimes stripes sometimes

'Bees' was commended in the 2014 National Poetry Competition.

Filmpoem by Kate Sweeney. Commissioned in collaboration with Alastair Cook and Filmpoem.

From the judges: ''This poem of historical abuse works powerfully because it’s written with a tremulous watchful grace. The adult perspective recalling the child perspective is very finely done, as the bifurcated character remembers the day that clove her in two. Its rhymes are halting, haunting, they come and go as if desperate both to remember and forget.'' - Glyn Maxwell. 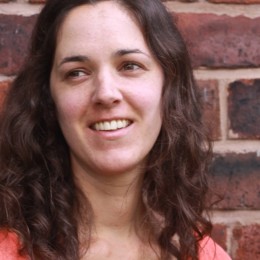 Beverley Nadin lives in Sheffield and is working towards a PhD in creative writing at Newcastle University. Her poem ‘6 a.m.’ won second prize in the Poetry London competition 2014. Her poems have appeared in PN Review, The Rialto, Magma, and Stand, and in other magazines and anthologies. She was commended in The Poetry Society's National Poetry Competition 2014.