In the end, we never made it to the Pavilion
but preferred instead to imagine
the gauche chinoiserie of Regency folly,
a camp flourish of minarets standing out
against the bitter English rain.

We closed our eyes and conjured faux Indian
domes knocked out from a nation’s first
concrete casts – brown and smooth
and looking, for all they’re worth,
like cardboard.

We paused to recall the mudslinging
of hoi polloi, their descendants now
baying for Gehry’s blood, his daring
to aspire on the seafront. This crowd
would throw up Tescos for a Kubla Khan.

We meant to come in praise of whatever it is
that insists against the odds upon gilding
a dolphin on a lamp stand, that craves
primrose rooms and chandeliers shaped
like fuchsia blooms hung upside down.

But most of all, we liked to picture
a garden inspired by a glutton whose devotion
transported peonies, erected hollyhocks.
We see ourselves drowsing among his poppies,
inhaling the cheap scent of those blousy stocks. 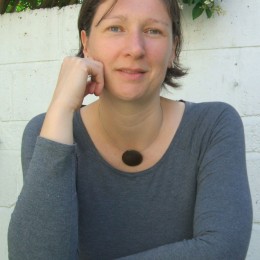