Skip to content
Home >Book review: A garment for the flagstones
News About Search Donate Shop

Welcome to hell – you will be dragged into it, you are already in it. Joyelle McSweeney’s Toxicon & Arachne explodes out from and traverses across this catastrophic, militarised, toxic, surreal, plastic, bony realm that foams into everywhere. Unstatic, nonlinear, spooling across exorbitantly large macrocosmic and microscopic material-bacterial-conscious scales, Toxicon & Arachne shows what it is possible to do in poetry that is simply not possible elsewhere. The words uncanny or extraordinary seem the wrong descriptive choices here – it is a frothing “boanmeal” spectacular, it is terrifying. I can’t really convey what it felt like to me, falling into and through its wormholes, except that when I looked up “metacarpals” I found out finger bones extend far deeper into the hand than I thought. Suddenly, what I thought was shielded by a protective layer was in fact squishier, more fragile, horrifying and stranger than I thought. I stared at my own hand unsettled, unable to unsee this new fact. An inability to unsee is perhaps one way of thinking about the trajectory of the poetic vision of this book, barraged as it is by its unchosen encounters.

A double volume in two parts, Toxicon & Arachne is like a Möbius strip with two twists or sides that darkly mirror each other unequally, push-and-pull. Toxicon opens with ‘Detonator’, which serves as an epigraph or hole to fall into and is followed by ‘Ars Poetica’, an overview of sorts of McSweeney’s radical vision of a (necro)poetics – of which more shortly. Toxicon is devoted among other things to the tuberculosis bacterium that killed Keats and toxic gestation, drilling deep down inside as well as outwards. Prefaced by ‘Terminator’, the second part, Arachne, is a set of (at times) more direct meditations adjacent to and encircling the death of the poet’s third daughter in early infancy. McSweeney has spoken of how, after Arachne’s death, the preoccupations in Toxicon became prophetic to her – and this grim suture, where the future lies in the past, turns the strip back onto itself.

It is difficult to descend into Toxicon without the right accessories or amulets – such as handgrenades, pomegranate seeds – in this case, McSweeney’s concept of the Necropastoral, which is intrinsic to the book and is conceptually scaffolded in her monograph The Necropastoral: Poetry, Media, Occults (University of Michigan Press, 2014). To briefly summarise using some of McSweeney’s terms, the Necropastoral is a non-rational, political-aesthetic Hadean zone focused on non-human material processes such as viruses, toxins, weeds. This realm is a deathly, obscene, nonlinear site that irrupts and continually re-emerges in our collapsed ecological time in the Anthropocene, where the past continually collides with the present. A shadow other to Keatsian poetic-lyric ideals of aesthetic beauty as a static, pristine, fenced-off Arcadia, the Necropastoral has its own aesthetics: corroded, corrupt, stinking, decayed, obscure, poisonous, wounded, forever-interconnected, the seeping of beings and bodies noisily back out of the earth. In this the Necropastoral is also apocalyptic, redemptive – not in terms of being restorative, but that things literally can’t be wasted or forgotten – they never leave, but circulate, violently, always re-resurrecting in spectacular and exhibitionist ways. Many poems in Toxicon & Arachne refer to murder victims, snuff sites, painful deaths, war, trenches. McSweeney’s gathering and stitching together of so many skeletal fragments also reminds me of writer and Jungian psychoanalyst Clarissa Pinkola Estés’ mythical archetype of La Loba, a wolf woman who collects bones in the desert and sings skeletons alive again.

Toxicon also presents a crown of toxic sonnets for Keats; I think the name of the bacterium, broken down – My-co-bacterium tuberculosis – seems apt in relation to thinking about these poems that are guided by a bacterial point of view, that connect the poet to the character of Keats, and later connect Keats’s lungs to the lungs of Arachne who could not breathe. Co-writing: writing as a form of material process, a kind of ecosemiotics where bacteria and viruses direct the hand as much as thoughts, enter thought, leave poisonous trails. Flesh, text, toxic, biomaterial worlds commingle in a form of cultural ecology. Described by McSweeney as a “quiver of poisoned arrows” (toxin and arrow sharing an etymological root), the collection’s vision of lyric violence that permeates, invades, sinking unchecked through tissue and paper alike, brings to mind Andrea Brady’s meditations on “drone poetics” – and the impact of the hypervisibility of drones on the contemporary lyric (drones too, feature in Toxicon).

Veering through sonnets, sestinas, free verse in a “sound-infused hyperdiction”, Toxicon & Arachne also manifests stylistically an intense resistance to adhering to any definitive poetic mode, which I read as a resistance to what Aditi Machado has outlined in her excellent essay The End (Ugly Duckling Presse, 2020) as “the conceptual moneys of poetry”, which depend on strategies not to overwhelm “the Reader” in order to generate consumable poetic value. Machado’s list of these don’t-do conventions could all be applied to Toxicon & Arachne: “sonic excess”, “multilingualism”, “arcane references”, “word play, especially punning”, “emotion”, “abstraction”, “big words”. The book’s multivalenced, long poems, as well as frequent use of money metaphors, engage in this fight against received notions of value, of digestibility. Rather: vomit, spew, scream, be dragged along. It is tempting to say that McSweeney’s poems in this sense have a kind of maximalist aesthetics of excess, but rather I think they are poems of maximum precision, a kind of poetic empiricism. To cut extracts out and quote them in a review – this act feels like a disservice to the book’s project and to the structure of the poems, which lengthily move as an open text.

Too, Toxicon & Arachne as maternal writing presents a violent, messy materiality where inner is outer and outer is inner. The garments, pockets and gloves recurring throughout remind me of Ursula K. Le Guin’s ‘The Carrier Bag Theory of Fiction’ (1986), which redefines technology as a cultural carrier bag, a container, a womb, as found in ‘Ars Poetica’: “pulled from the Seine with a seine net. With a purse seine”, or

The puddled cloth, the placket of blood
like a garment for the flagstones
below the smashed skull
sewn on the bias
the seam lies flat

No one is exempt from being gathered in, gathering or imbricated in these Pandora’s boxes, careering through the wreckage coated in lotions, potions, full of medications, gems, “bedazzled” – there is no relief from the endless chemical spills, extraction, exploitation in this “ceaseless report” patterned together by sound, where nothing can fly forward except a toxified poetic logic.

Likewise, the book’s engagement with a communal history of birth and death feels synonymous with, though by no means exclusive to, motherhood – to have a child is also always to bring a death into the world, to excavate a grave in the future. The poems in Arachne inhabit this “endzone” in an unsentimental mode that is acute, unbearable, a personal testimony that I feel unable to comment on. Like a toxic arrow, death has a twin movement of rising out of the sky (and keeping rising) – and dropping into the bottom-most floor of the basement (and keeping crashing down). The final poem in Arachne, and the book, ends with this impossible dual movement, impossibly possible in poems: 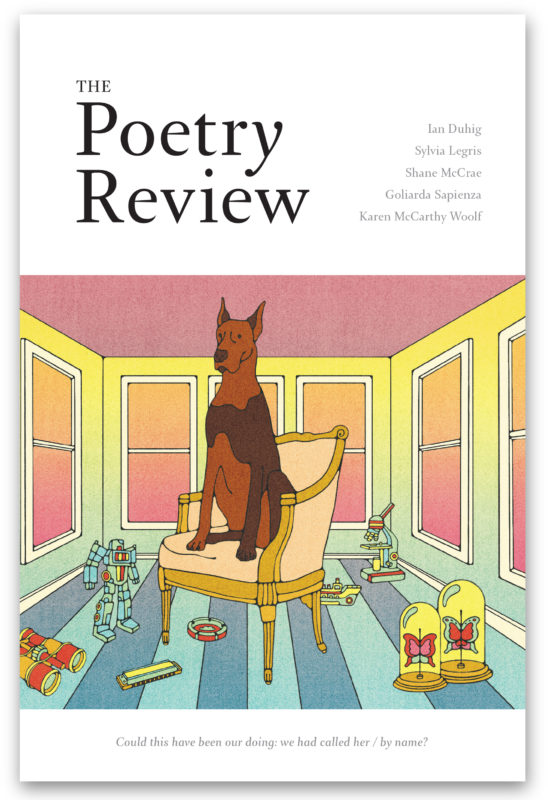 Lucy Mercer’s first collection, Emblem, is forthcoming in 2022 from Prototype. .