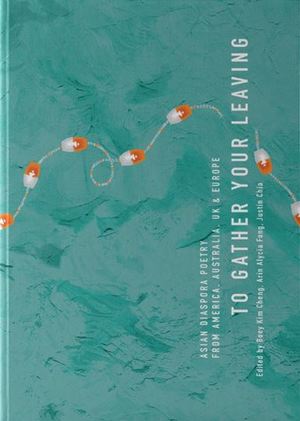 What should the purpose of an anthology be? Aiiieeeee! An Anthology of Asian-American Writers (1974) was formative in protesting against certain stereotypes of East Asian-Americans. It was infamous for Frank Chin’s polemical, problematic essay pushing for a “non-Christian, nonfeminine and nonimmigrant” sensibility. In 1993, Garrett Hongo edited The Open Boat: Poems from Asian America which criticised Aiiieeeee!’s macho-rejection of anything that was not overtly community conscious. Hongo’s anthology tended towards the lyrical and the personal, celebrating the growing reputation of Asian-American poets in the 1980s. To read The Open Boat now is to see solidified many of the ethnic signifiers that came to dominate, then haunt, mainstream conceptions of Asian diaspora poetry. Recently, Victoria Chang’s Asian American Poetry: The Next Generation (2004) announced a younger class of poets with increasingly globalised identities and contemporary concerns. Anthologies exist as exercises in canon-formation: they reposition and lend credibility to marginalised counter-canons. The growth of Asian Studies departments means that any new anthology has the hapless task of existing simultaneously as textbook, trade-book and manifesto. Each fresh iteration of the Asian diaspora anthology produces, as Hua Hsu writes, an “assertion of critical mass: [that we] are here. They give emerging communities shape, a name, a kind of portability.”

At a healthy 684 pages To Gather Your Leaving, edited by Boey Kim Cheng, Arin Alycia Fong and Justin Chia, will never be the easiest book to carry around. Nonetheless, this is a valuable and moving anthology which deserves a wide readership. The sixty-four poets picked out from the last three decades from across the globe aim to “give tracking snapshots of the development of Asian diasporic poetry […] and to offer a global comparative view of their trajectories”. The editors argue that diaspora identity challenges the allegiance towards any singular space in favour of continuously fluid renegotiations, which chronicle an imagined community strengthened by the process of anthologising. Diaspora poetry, therefore, does not merely return us to the Asian continent but acts as a bridge between various dispersed locations of the imagination within a single moment. In its whirlwind tour of the USA, Australia and Europe, To Gather Your Leaving offers a cohesive narrative, incorporating both emerging and established poets. Popular poems by Agha Shahid Ali, Marilyn Chin and Li-Young Lee jostle with acclaimed verse by MacArthur Fellow Ocean Vuong and T.S. Eliot Prize winner Sarah Howe. Crucially, the book’s broad representation of ‘Asian’ identity pays off. The generous and thoughtful curation of Southeast Asian, as well as Australian, poets should be an enduring feature of this anthology, separating it from its predecessors.

Unsurprisingly, many poets situate their diaspora identity within oblique explorations of the past. Highlights include: the Khmer poet Sokunthary Svay who resists the closure of the refugee returning to their homeland by finding those sites of trauma, now turned tourist attractions, “already cliché / in the country of death paddies” (‘Baptism’); Adam Aitken’s de-Orientalising of Marguerite Duras’ description of the Mekong River (‘Lines from the Lover’); and Khairani Barokka’s lyrical poems which give presence to the historically colonised female body (‘October/April’). Other poets reveal their anxiety about the future: Omar Musa imagines a humanless world populated by our residue words and speeches (‘What Will Be Left of Us’); whilst Filipina-Australian Eunice Andrada is one of the few poets whose work in the anthology responds to the effects of the climate crisis on indigenous island populations, a warning for all bodies whose “brown skin / is married to seabed” (‘(because I am a daughter) of diaspora’). More poems by Australian poets reflect a readier engagement with that contrapuntal – to use Edward Said’s term – space of diasporic existence as part of a complex, transnational and cosmopolitan web. These poets reaffirm that we cannot afford to separate the poetics of diaspora from specificity, from analysis of class, race, gender, sexuality and indigeneity. To live in the ‘hyphen’ nowadays is to interrogate how we fit in the world’s latticework. As Bunkong Tuon writes, the search “for a theory of an authentic, hyphenated, diasporic, transnational, / (or was it post-national?) transglobal Asian-American identity” fast becomes an exhausting impossibility.

The anthology’s overall medley of work feels somewhat bowdlerised by the editors’ introduction which largely focuses on kindred horizontal tropes across the pages. We are told that a lot of the poets write about “distinctive ethnic flavours” of food, historical trauma, ancestral longing, “reverence of parents and grandparents” et cetera. The editors’ knotty ambivalence towards these subjects is best represented by Timothy Yu’s lampooning of Billy Collins – as well as the reader – in ‘Chinese Silence No 12’: “But here we are, working our way through an anthology of Asian American poetry, / one cliché at a time. / We read poems about silent grandmothers in the kitchen.” As Dorothy Wang notes, the differences between various hyphenated groups are as important as their similarities; a more functional essay might have made clearer those comparisons between the book’s regions and generations. “Fractures, criticism and rebellion” are teased in the introduction but never explored. Further socio-historical context is needed if this anthology wishes to make a deeper comment about the evolution of Asian diaspora poetics. In such a large book, ordering the poets chronologically instead of alphabetically might have gone a long way. Not all introductions need to be as mordacious as Chin’s but To Gather Your Leaving’s prioritisation of analysing what is being said, rather than how – when or where – feels safe and expected, especially as anthologies are already at risk of reproducing the same ethnic essentialism whenever ‘Asianness’ is introduced at the expense of other literary, linguistic and stylistic analyses.

That is not to say that the poets in the anthology, bound by the English vernacular, have little to say about language. Language becomes a key to circulate and make sense of permeable narratives. “She has more language / than difference. She speaks root words,” writes Maya Chowdhry in ‘Brides of Dust’. The nebulous relationship between speech, tongue, translation and code-switching forms the central concern for (mis)understanding the silences surrounding migration. Myung Mi Kim’s sparse fragmented verse reorganises the weaponised grammar of militarised society in order to produce a “ramshackle poetry / meridian bit in the mouth” (‘Civil Bound’). Other poets communicate the trials of crossings and reverse-crossings by playing with form and genre. Two standout prose poems by Bhanu Kapil and Bella Li are especially successful in an anthology where too many of the inclusions adopt a uniform style. Kapil invokes the transitory power of the hitchhiker as a body between the monstrous and the cyborg: the alien figure damaged by migration “as if the day has a memory of her and not the other way around” (‘India: Notebooks’). Li’s ‘아가씨’ explores a similar liminal zone between artifice and reality by drawing on Park Chan-wook’s The Handmaiden as the speaker “[returns] to find the country a deception, only real in films.”

Although the anthology aims to be comparative, the unexplained geographic absence of any Canadian or Aotearoan poets feels like an odd misstep considering the important contribution poets like Fred Wah, Rita Wong, Evelyn Lau and Priscila Uppal have made towards Asian-American poetics. Equally, it is also difficult to conceive of the contemporary UK-Asian poetry landscape without accounting for the work of Tishani Doshi, Daljit Nagra, Sandeep Parmar, Vahni Capildeo and Hannah Lowe (the latter two also writing from the significant position of concurrent Caribbean and Asian heritage). To Gather Your Leaving collects a wide cross-section of poetry, yet readers who are looking to understand how the Asian diaspora has contributed to the development of avant-garde poetry since the 1990s may be disappointed to find the absence of Theresa Hak Kyung Cha, Mei-mei Berssenbrugge, Tan Lin, Hoa Nguyen, Sawako Nakayasu, Barbara Jane Reyes, Cathy Park Hong, Don Mee Choi, Brandon Shimoda and Vi Khi Nao amongst others. Of course, as the editors explain in their introduction, one must sympathise with the anthologiser who is inevitably limited by budget, space, copyright, as well as the whims or availability of poets and permissions departments. As Hayden Carruth once remarked, “An anthology at best is a system of compromises.”

Between the editor and the reader is a tacit agreement that any anthology which seeks to represent a community will, paradoxically, always fail to be fully representational. To Gather Your Leaving is thoughtful in its attempts to locate a large range of answers to hazy questions surrounding Asian identity which have only become more complicated since Aiiieeeee!’s publication. For a subject that is so broad, the ambitions of the editors are worth praising, while the flexibility of this anthology means it will be well suited for the classroom and for the general reader. In ‘Rootless’, Jenny Xie asks “Can this solitude be rootless, unhooked from the ground?” By unrooting the borders of any one nation, To Gather Your Leaving presents a far-reaching perspective that was lacking in previous books by cultivating the anthology as a global third space. I doubt there will ever be a perfect anthology of Asian diaspora poetry. However, at the very least, projects like To Gather Your Leaving remind us of the continued necessity of anthologies to evolve and write up different boundaries in order to, as Xie puts it, “[keep] count of what’s given against what’s stolen” in the long run (‘Chinatown Diptych’). 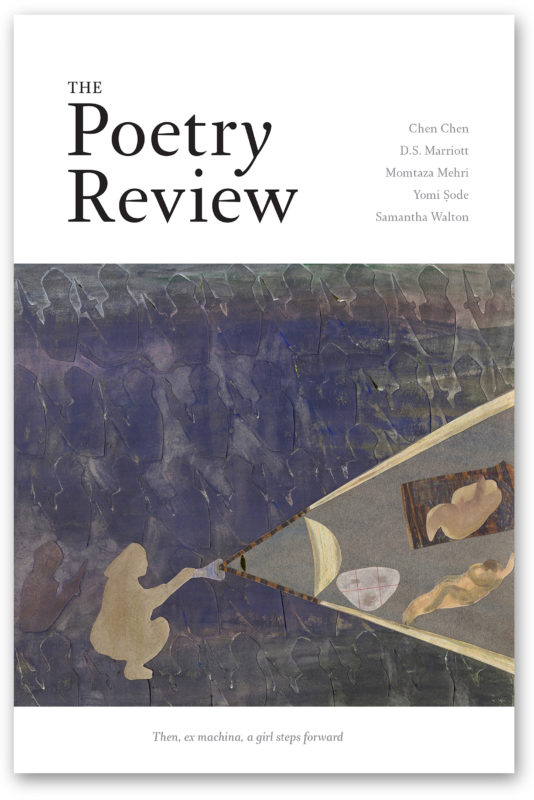 Jay G. Ying is a writer based in Edinburgh. He is the author of two poetry pamphlets: Wedding Beasts (bitter melon poetry, 2019) and Katabasis (Smith|Doorstop, 2020). This review was first published in The Poetry Review, 110:1, Spring 2020. © The Poetry Review and the author.