Will Harris on closeness, endings and containment

One sense of “after” is emulative, as appended to loose translations or versions – eg “after Cavafy” – where the source text is transformed in the target language. In ‘There Are No Ends, Only Intervals’, Anaxagorou writes: “America is named after Amerigo Vespucci / a coloniser who would prove Columbus wrong / history is all of our making”. America exists after Vespucci in more than just name, though, shaped by the trade, settlement and dispossession that came after him. But if history – like poetry – is “all of our making”, it can be remade again and again. The poems of After the Formalities, at once personally redemptive and historically acute, feel like an attempt to prove this: to translate painful formalities into poetry.

This is from the title poem:

Reports of racist attacks. Father turns up the volume.
Turns us down. Chews his pork. Stings the taste with beer.
Tells mother to pass the pepper. There is never a please.

Anaxagorou’s poems are at their most powerful when they slip into this kind of rapid rattle, the verbs fronted and the clauses lopped of their subjects. The narrative, rather than losing pace with the language, is turned, chewed, stung. Emphasis is placed on report, which can refer blandly to an account (or formal procedure), as well as to the noise issuing from a firearm. It can be semantically turned up or turned down, but even closest to mute it carries a charge. The violence contained in those news reports manifests in the father’s silence, his inability to say “please”, as if that would imply a kind of servility. His aggressive withdrawal – accentuated by that burst of p’s (“pass the pepper”) – is the sole means through which he can feel his agency.

Numerous poems circle around Anaxagorou’s relationship with his father, along with the death of his grandmother. His grandparents left Cyprus to come to England, and the figure of his grandmother represents a physical tie to the island (as he says in ‘Cause’, “I’m here as my grandparents were / only with a moving mouth”), and a symbolic link to his desire to write: “she. who taught me to write. to sip sound”. This is from ‘Biographer’, Anaxagorou’s elegy for her; it’s one of the book’s most affecting poems, managing – in its careful, spare description of her final weeks – to articulate what so many of his poems do: “use language for closeness. for closure.”

Though the book is framed as “after”, the word “before” hovers throughout. “[W]hat comes before a fact?” asks the speaker in ‘Following on from Kant’, which juxtaposes the virulent racism of Kant’s writing about “the Negroes of Africa” against the actual (largely erased) history of African cultures. The question resonates personally too. Anaxagorou describes an attack on an Asian student at his school, “how they beat the future from his eyes”. In every family with a recent history of migration, the question of “before” is never far from the surface. Its perspective haunts the present. Just as the past is a foreign country, the future is beaten beyond possibility. “What comes before a fact?” Migration doesn’t just change what comes before and after, it alters the experience of time.

Writing about ‘After the Formalities’ in a ‘Behind the Poem’ piece for this magazine, Anxagorou says he kept returning to the “same ten happenings” that had shaped his sense of self. He wanted to write a poem that would bridge “the personal with the official”, interspersing these “happenings” with a series of historical notes about the development of race as an idea: “In 1606 French diplomat Jean Nicot added the word ‘race’ to the dictionary to denote distinctions between different groups of people. Nicotine is named after him.” The book as a whole follows a similar pattern: between each clenched moment of violence, or of violence repressed, there are historical asides, and then moments of calm that feel like exhalations.

The latter usually centre on the poet’s relationship with his son. In ‘Things Already Lost’, Anaxagorou writes: “We watch a snail work the earth / he asks if the trail is a thing / it makes or it leaves.” In ‘Patricide’, he addresses him directly: “My boy, your breathing has abated to the pace of letter writing.” In both these instances (“snail work” and “letter writing”), Anaxagorou seems to be talking obliquely about his own approach to poetry. It allows him to make sense of the racialised body in time, and to provide a “trail” for his son to follow as his grandmother did for him.

These are moments when the poems in After the Formalities – so often brutally fast, frazzled and fragmentary – slow to the attentive pace of a snail; the air seeps in; hopefulness or stillness glimmers. It reminds me of the way Emily Dickinson describes the “Stillness in the air –/ Between the Heaves of Storm”. Though writing may take place after pain – too late and too soon – it can still allow for those in-between moments when closeness, if not closure, seems possible. 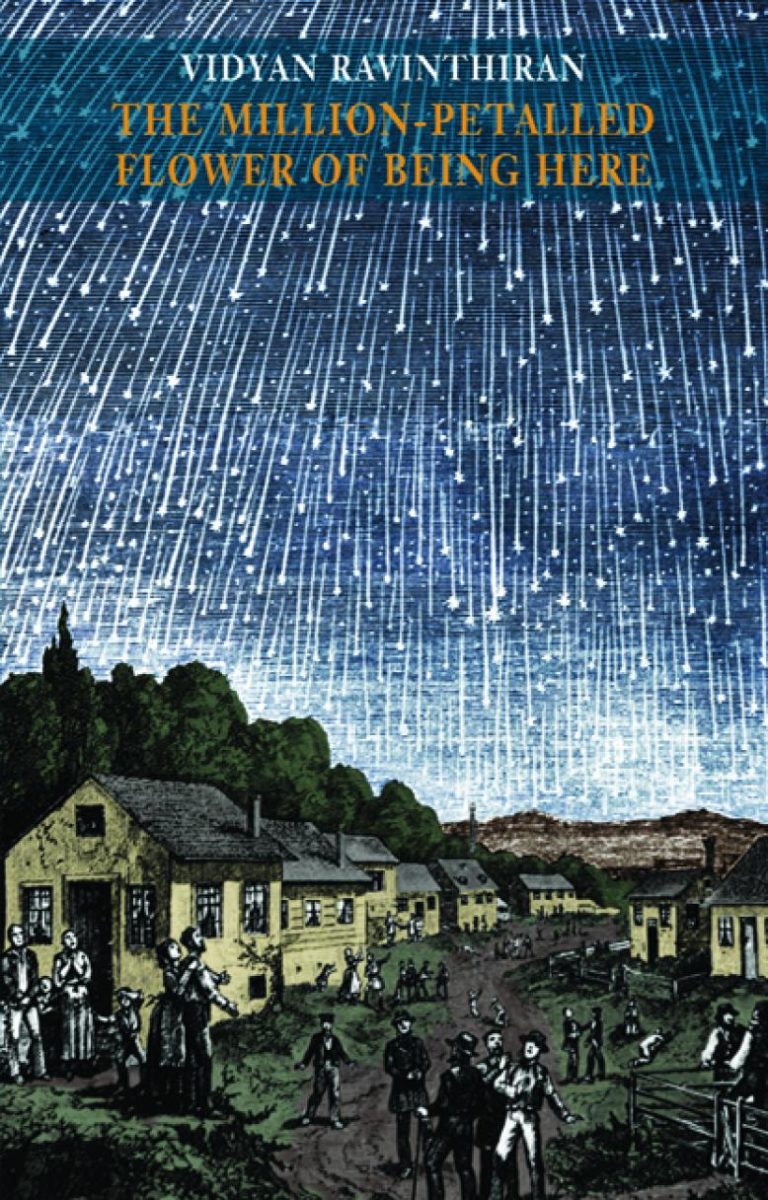 Whereas Anaxagorou freely experiments with form and layout, Vidyan Ravinthiran’s The Million-petalled Flower of Being Here works in (and also against) the tried-and-tested groove of the fourteen-line sonnet – 100 of them to be precise. Dickinson knew the risk of poems becoming wooden if they cleaved too closely to form: “The Feet, mechanical, go round.” Ravinthiran mitigates against the mechanical go-round by varying line length, metre, and tone (several sonnets are made up entirely of “found” texts from William Hazlitt, John Addington Symonds and others). Even so, the sonnet has an almost-gravitational pull towards the thuddingly conclusive. I was reminded of the (final) line of Louise Glück’s ‘Celestial Music’: “a love of form is a love of endings.” The effect of so many sonnets back-to-back – printed two to a page – is of a lot of endings. For example:

But we’ve fallen through the floor and off the grid
and your face tells me mine is dead.
(‘Conversation’)

at lunch a colleague tells me of her mother
who always orders food she cannot bear.
(‘Brexit’)

A final couplet set to a ticking duple metre can’t help but suggest – like a raised eyebrow – a kind of knowingness. That last couplet is set in Durham, which voted Leave in 2016; with the poem’s title, the mother’s preference for “food she cannot bear” takes on an overwhelming resonance. But what exactly resonates? Is the “mother” analogous to a Leave or a Remain voter, or to the politicians who called the referendum? Or maybe he’s touching on the larger difficulty of bearing what’s ordered.

Another interesting effect of the sonnet sequence, due in part to its structural monotony, is a certain atomisation: you read between poems as much as through them; parts connect with parts. The mother in ‘Brexit’ links back to ‘Parental Advice’ – a poem spoken by Ravinthiran’s parents – and forward to the beautiful ending of ‘Dubrovnik’, where the poet’s mother snatches him away before a wave does; that sonnet then pivots to address his wife and he describes how her mother “when she swam out to sea, took you with her”. “[W]ords go astray in the familial noise”, Ravinthiran writes in ‘And So’. In the clamour of all these sonnets, families “go astray” too: the figure of the mother is a source of strength and wisdom, yet overbearing and fearful. These mixed feelings come full circle in ‘Birmingham’ and ‘…of justice’, two beautiful poems about the fraught process of conceiving a child.

Ravinthiran is a fantastically clever and inventive writer. It comes out best perhaps on the level of the line. This is his description of a sky inflected by the memory of a previous night’s lovemaking: “brown iron rusted to the eye-feel of chorizo” (‘Sea Break’). It’s echoed in the penultimate line of ‘Lingerie’: “The storm has passed. The clouds blush to remember.” I love the way those dissimilar (blushing?) images – rusted iron and chorizo – are yoked together by the strangeness of “eye-feel”, a phrase reinforced by a later description of sketching as “touching with your eyes”. Perhaps “eye-feel” is also an allusion to artist-poet William Blake: “We are led to Believe a Lie / When we see not Thro the Eye”. Ravinthiran writes about Blake in ‘Contrarieties’: “Blake / grappled with an abstruse system / heroically.” Both are poets who grapple with abstruseness, scorning hypocrisy, their work an admonition to see more feelingly.

William Carlos Williams once commented in an interview: “gosh, how I hate sonnets – [it’s] like putting a crab into a square box. You’ve got to cut his legs off to make him fit. When you get through you don’t have a crab anymore.” I wonder if this explains why one sonnet in particular has stayed with me. ‘In the mixed area’ has fourteen lines and mostly rhymes (“three” / “he”, “towel” / “Rahul”) but the lines expand and contract wildly. The poem begins with an outraged tabloid article about a new Thomas the Tank Engine film, which plans to add Chinese and Indian trains to the cast of the original TV show. The poem then turns to a memory of the poet’s nephew Rahul – “think of his name as growl, without the g” – inventing a game with a toy train and a radiator in “angry delight”. The “square box” of the sonnet can’t contain Ravinthiran’s own delight. Form and formality dissolve, and he ends on a single long line: “I love my nephew in his big house in Ilkley and his golden mixed-race skin.” 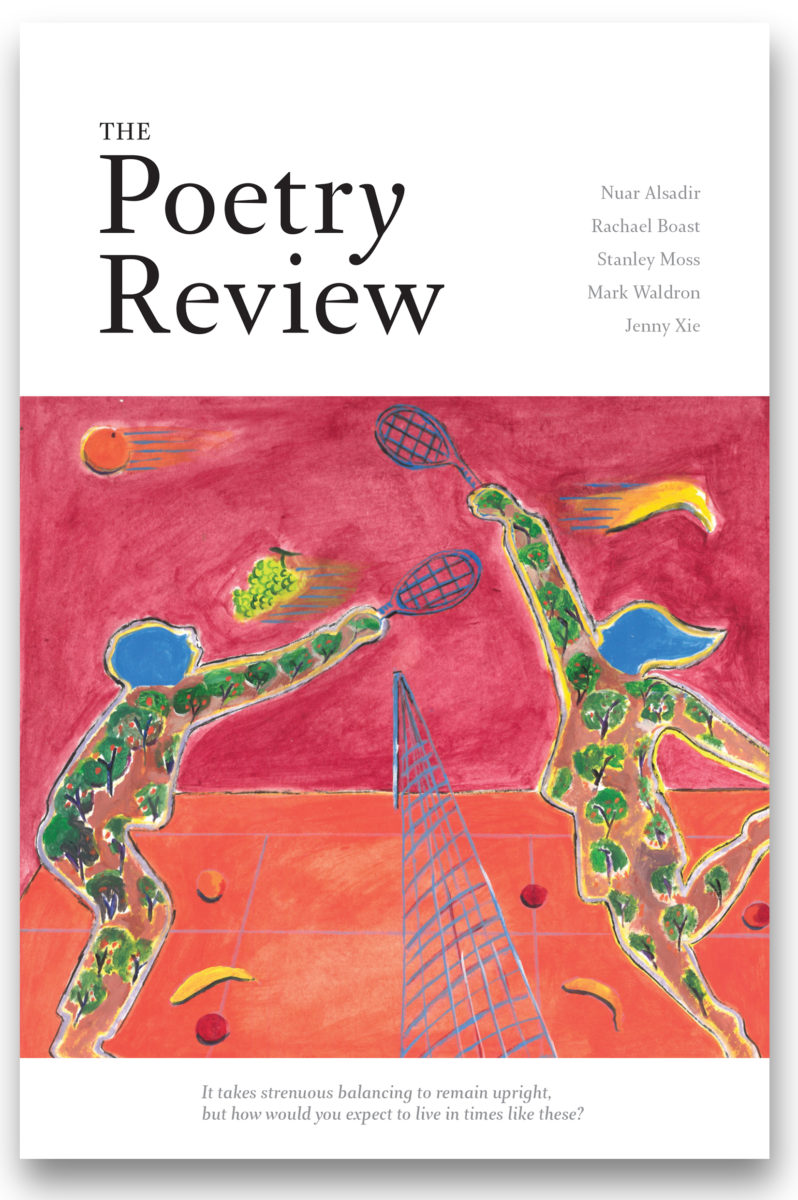