In the pitch-black night, a flame shoots up in the middle of the field
The house on fire is like a rose kneaded from crimson water
(‘Black Fishnet Gloves’)

Upon reading the phenomenal Autobiography of Death by Kim Hyesoon I thought of the line by Derrida: every text is in mourning until it becomes translated. If books can read out their own laments, if readers become the spaces that grief occupies, then through the act of translation – a reversal of power – we are travelling into the realm of words departed. In Autobiography our guide and translator, Don Mee Choi, offers a restless passage with one of the foremost poets of the world, through a passionate sequence of lyrical poems that stares insistently into the void to exhume all that is lost, disintegrated and untranslatable. 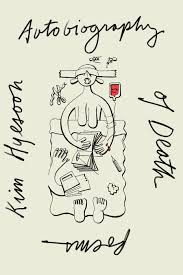 That quote by Derrida, only half-remembered, I would prefer to leave unverified both on the page and in my mind like an intermediary spirit from a place that is neither true nor false. It is this same in-between medium that Kim is writing of: the white space between two lines of black ink, not quite alive nor fully dead. Her speakers come from this bardo – the collective elegy of the oppressed emerges angrily out of the vanishing point. By channelling the trauma of those who have unjustly died and been buried as a result of Korea’s modern history, Autobiography becomes Kim’s most compelling and accusatory work to date. Rejecting conventional Korean form and language, her words proliferate in that non-space as linguistic ghosts; the fleshy terrain of the collection is brimming with deadly life and the lively dead. Kim and Choi pen a place where language is allowed to die through poems that begin haunting “at the moment when death cuts across our bodies” (‘An Interview’).

The experimental collection opens with forty-nine poems chronicling the number of days when the spirit roams the world before it can enter its next reincarnation cycle. This ambitious narrative anatomy is reflected in the formal inventiveness of each new day. Kim injects her poems with a gluttony of objects, lists, repetitions and interruptive voices to create an astonishing reverberation of sound and rhythm. Fi Jae Lee, Kim’s daughter, builds upon this din of death with a series of animated line drawings that match the shape-shifting and pulsing senses of her mother’s poems. Songs of mourning follow nursery rhymes follow riddles; every couplet echoes like a black mirror, wriggling images reflected inside their inversions. Duplicates multiply – life is fractalised. Whether juxtaposing or repeating, Kim’s metaphors embody a symmetry that is strictly balanced, her lines poised on the page like a chopping-knife eager to pare away those familiar somatic sensations: light versus dark, hot versus cold.

Kim collapses the uncanniness of living in the twenty-first century with an atavistic shamanism. In the very first line of the collection the speaker suddenly dies on her commute to work:

On the subway your eyes roll up once. That’s eternity.

You must have bounced out of the train. It seems that you’re dying.
(‘Commute’)

In a later poem a different speaker leaves “the world where all the trains on the platform light up at once and / silently forget about you” (‘Midnight Sun’). In Autobiography Kim has killed off the “I” and claimed the destabilising power of all the plural “yous” of society; this transgressive second-person address is one of the most noticeable features of the collection. Stern and declarative, every “you” holds the sum erasure of voices subjugated in its address and the non-naming of that collateral non-self: she is pointing to the erased. To witness Kim’s poetry in English one must become, as the poet and translator Jake Levine has written, “less American, less white – I must transgress and disappear”. As we move into the “zone of the unwanted” Choi explains that the collection should be read as a form of autoceremonial suicide turned autotestimony. Translation, and its older sister transcription, live on through oral literature, songs and rituals, liminal spaces where the poetry of South Korean women has traditionally flourished. The legacy of Kim’s writing enacts that expelled watershed between the real and the illusory, and from that historical gap the reader understands why the collection must be an autobiography, as we begin to edge closer to that dark “crevice of death”.

Poems such as ‘Seoul, Book of the Dead’ and ‘Autopsy’ gesture more explicitly to the social and cultural ruptures following events such as the 1980 Gwangju Uprising or the 2014 Sewol ferry disaster, in which 304 people died, most of them high-school students on a school trip. Like a bloodline, Kim conjures a link between multiple forms of enacted violence, injustices and moral failures. In the vortex of unnamed bodies, as a result of neoliberalism, neocolonialism, repressive governments, even as a result of translation – which Choi warns can become an act of dominance and betrayal – we see the haunted past, present and future speaker-self. Kim is not merely carrying out a historical autopsy on the “you” but an autopsy of the nation as a whole. Poems such as ‘I Want to Go to the Island’ become haunting tributes for the students onboard the Sewol ferry, a dirge and calling out of what could have been easily avoided. Helplessly, we are enfolded into the collection’s performance of its imagined and future possibilities, where even in revival:

For the thousandth time you don’t reach the island.
You won’t be able to reach the island anytime soon.
The moment you think that the arrival is near
you board the ferry in the middle of the night, dragging along a small bag.

Autobiography builds on the architecture of death from Kim’s previous collections, her simulacrum of Joyelle McSweeney’s necropastoral: a forever presence-absence, that stinking permeating nausea of collective violence encoded into capitalist and imperial institutions, a subterranea defined by the ecosystem of rot, digestion, decay and vagueness. This is where death is most alive. The visceral process of constantly consuming and engaging with the dead – of narrating the dead, signifying the dead, excreting the dead – is sacred yet carnal. People become noseless, mouthless, faceless: vessels less filled than they once were, now contaminated and occupied by “somebody else’s candle […] lit in your body” (‘Seoul, Book of the Dead’). The poems wants us to “Look, look carefully without fear” (‘Such Painful Hallucination’) into that overflowing mass, the grotesque madness encased in every mortal form. These unquiet poems feel as if they might revert back into their original language when the reader is not looking; Choi argues that translation is “a rupture from what is perceived as the original, the alive”, and so does Autobiography hold that entropy of the dead which refuses to be fully translated or known.

Surreal moments in the collection often lean into the abject with a black humour where women and girls are at risk of some terrible transfiguration or translation of metaphor. “The woman gasps. As her lips part, her shy skull’s teeth line up like dining room chairs” (‘Death’s Magic-Compressed Distance’). Further anthropomorphised totems of daily living gain a new relevance, a new secret life, through Kim’s tricks of imagery and wordplay. The collection is a treasury of trinkets: rabbit ears; animated dolls; childhood toys; butterfly wings; loose fabric; and always the motif of the “hard mirror” that “reflects all things like the face of someone whose insides are dead” (‘A Face’). The reader is brought into a market of memories and lingering consciousnesses. Every poem is a currency, a coin to place underneath the tongue.

Sometimes a dead rabbit reincarnates as a bloodied menstrual pad.
Occasionally you pull out a dead rabbit from your panties.
(‘Calendar’)

Many poems make an incision into the interiority of the domestic realm that underpins violent male narratives of both the living and the dead. Figures in later poems, such as “The Prince” and “Lord No”, are distortions of the patriarchal and transnational imagination, warnings against men who invade and shame the stories of exploited women. In the preface to I’m OK, I’m Pig! (2014) Kim argues that Korean women writers are engaged in “doing poetry” as opposed to merely writing it; her goal is to reinvent her mother tongue and claim a space where voices of women made by Korean men do not belong to her. Alongside her contemporaries Ch’oe Sŭng-ja and Yi Yŏn-ju – brought together in the collection Anxiety of Words (2016), also translated by Choi – Kim has carved a radical literary tradition via her defiant work. For Kim this “ontologically feminine” language is a type of death: the ink is not milky white but as black as a ferry on a dark sea.

The formidable final poem ‘Face of Rhythm’ is a sprawling piece stretching over sixteen pages that exists outside of the collection’s neat narrative frame, just as the speaker-ghost of the first poem exists outside of her body. Exploring further the connections between women’s writing and the Korean icons Princess Nakrang and Princess Paridegi, Kim vocalises a fragmented cycle that centres the author’s own physical pain and corporeal boundaries of her sick self. At first the presence of this fiftieth poem seems jarring; there is an uncanny shift towards the first-person, authorial “I” that is difficult to resolve yet still seems critically vital to close the collection as a whole. Autobiography ends with two supplementary sections: an interview between the author and translator, and then a note from Choi herself about the process of translation. These postscripts, poetic literary pieces in their own right, offer the entire sequence a rich second life; they hold up the mirror in order to see more clearly how Kim’s poems inhabit that gap between words and sound, life and death, “I” versus “you”, presence versus absence.

To journey to the end of Autobiography – which has been shortlisted for the Griffin Poetry Prize and Best Translated Book Award – is to bear witness to a darkly shining requiem, a pre-eminent literary spectacle of contemporary world poetry. The assured completeness of Kim’s vision demands that the reader experience the cycle again, to think about that very first poem of the dead woman passing through the subway; we are asked to hear that other place Kim has continually tapped into and disturbed with such profound force throughout her body of work. “Death is something that storms in from the outside” (‘Commute’), Kim declares without hesitation, signalling to a world of sorrow in its creation. Every line of poetry becomes a ritual of grief: only in mourning can her authorial voice begin to resist the conventional narratives of life too easy to articulate, instead embracing a radical language already killed the moment it is uttered. Translating Autobiography of Death may not resurrect the original text but, just like death, which “storms in”, translation occupies that oblivion in which each slippery and ceaseless word takes one last breath on the reflective surface of their new white pages.

Jay G. Ying is a poet, translator and critic based in Edinburgh. His pamphlet, Wedding Beasts, is forthcoming from Bitter Melon Poetry. This essay was first published in The Poetry Review, 109:2, Summer 2019. © The Poetry Review and the author.