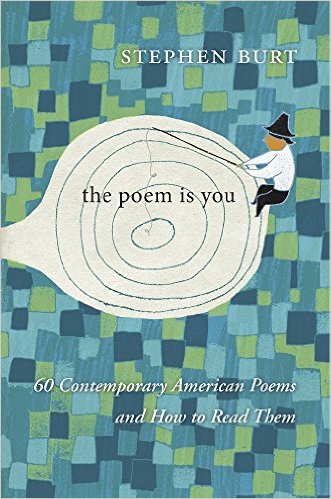 The Poem Is You is a collection of knowledgeable, useful and affectionately committed short essays on sixty recent poems by sixty American poets. The poems and essays are assembled in broadly chronological order by publication, starting in 1981 with John Ashbery’s ‘Paradoxes and Oxymorons’ and ending in 2015 with ‘Weeping’ by Ross Gay. In his informative and humane introduction, Burt emphasises the variety of identities represented, the array of forms and the diversity of interests and points of reference. His readings are methodically cross-referenced but not dependent on one another. He works outwards from each poem, rather than inwards towards poems as examples of an approach to poetry. It is a difficult book to summarise.

I read it cover-to-cover over a couple of weeks. Or I tried to – I couldn’t help jumping ahead. I wanted to know more about C.D. Wright and Terrance Hayes. I was intrigued to find out what Stephen Burt might have to say that was new or clarifying about Claudia Rankine and Jorie Graham. (His discussion of ‘Futures’ is a brilliant explanation of the ways Graham, in doubting form, engages with intersecting ecological and economic systems, and he places fresh emphasis on her encouragement of the reader “to admire […] the guilty, burning world”.) I was also impatient to see if Burt could change my mind about Albert Goldbarth, whose work I find irritating (still do). While struggling through John Hollander’s (1983) ‘Songs & Sonnets’, I saw this title ‘>> > >> > >> PLEASE FORWARD & > >>’ by kari edwards (2003), and set off in search of a more instant hit (which I got).

The book prompts several questions I don’t have answers to. If the dates were removed from the sixty poems in this book, I wonder if it would be possible to tell that they were in chronological order. I was surprised, for example, not to sense an identifiable shift in style in the poems after 2001. The volume is introduced as a personal selection, and Burt is willing to give careful attention to many forms of writing, but page by page, the essays do not find him in the frame.

One unexpected interest of reading the book is its dedication to a middle course: it resists both an overarching narrative about contemporary American poetry, and a more intimate, anecdotal description of Burt’s relationships with the poems. I wonder if any critic in Britain is thinking and writing about British poetry with his unselfconscious erudition, light touch, even tone.

I also wonder at what point terms like avoid, resist and critique came to dominate literary criticism, when poems started to “resist prose sense” (a shorthand used throughout the book), avoid “mere autobiography” and “mere human regulation”; to “enjoy 1950s slogans while critiquing the United States after 2001”; to “critique […] story itself”. These terms appear often enough to raise the question about their applicability in each case; but ultimately I don’t think that will be my lasting response. I feel much more keenly, as Burt writes about kari edwards’s poem, “how strange and difficult and halting and fragmentary and frustrating such resistance can seem for people who want to practise – or even to understand – it fully”.

The book is open to these wider questions about the relationship between criticism and poetry, and between identity and poetry, but does not pursue them methodically. A majority of the readings identify the poet’s gender, race, religion, sexual orientation as important to the story told about the poem. But the title is spurious in suggesting the book will have something more direct or strange to say about how readers associate with poems.

Instead, Burt’s choices implicitly expand the contemporary canon. His writing balances fastidious respect for an individual’s vocabulary of identity with the universalising tropes of criticism (both the reader and the embodiment of convention are always “we”). Alongside the language of resistance, there is a tendency, at the end of each essay, to make a clear, positive statement in the style of a maxim. Burt’s commentary on Kay Ryan’s ‘Emptiness’ shows how the poem critiques Western conceptions of landscape, and adds his own elegant distinction between a poem which seeks “intimacy” and a poem which seeks “trustworthiness”. It then concludes with typically detail-orientated optimism: “[Kay’s] apparently impersonal analogy [between endangered animals and the mind] cannot save all the elk or cayuse in Montana (elk are not endangered anyway), but it might save your ambitions, your career plans, or your weekend: it might even help you live your own life.”

I sometimes imagine what kind of character profile a spy would compile about me from the Google searches I make while reading a book. The Poem Is You is full of interesting facts and sketched networks of references, and uses relatively specialist terms throughout. But I Googled nothing because terminology is always defined, layers of references gracefully excavated. Burt explains that the description of a butterfly in Ross Gay’s ‘Weeping’ (a butterfly which is a child’s possibly imaginary friend) does fit a real butterfly called the Question Mark. Discussing John Yau’s sestina ‘Modern Love’, which begins “The clouds continued swelling like poisoned fish” (and is therefore bound to repeat ‘fish’ at least six times), Burt knows that “decades-old drag queen argot calls female authenticity ‘fishiness’ and cisgender women ‘fish’”. He is agile with the Chinese and European traditions brought together in Brandon Som’s amazing poem ‘Oulipo’, which is “eighteen attempts to emulate in English the sounds of a famous lyric by the Tang dynasty poet Li Po, as recited in ‘northern Chinese, Peking dialect’ (aka Beijing Mandarin) by Lo Kung-yuan on a Smithsonian Folkways LP released in 1963”.

I expect the book will mostly be read as a reference text, dipped into rather than ploughed through front-to-back. I noticed, as I went back and re-read selected poems and essays, that knowing that prose is waiting makes me a lazy and recalcitrant reader of poetry. (It can feel – and this is probably not Burt’s fault – something like meeting someone your own age while their parents stand expectantly by.) The precise effects, though, are different for different poems. I think I enjoyed reading ‘Oversized T-Shirts’ by Gaby Bess more in this context than I would have enjoyed it otherwise, because the Alt-lit style – the flat, schlocky protest – seemed more interesting and more alive when treated as a historical document. I was grateful to be introduced to Robyn Schiff’s ‘Lustron: The House America Has Been Waiting For’ because it’s an exciting, moving poem with a very unfamiliar architecture. But I also hoped there would be some great facts about Lustron prefab homes to come in the essay – and I wasn’t disappointed. Burt savours every detail, from the Lustron’s outer walls made of porcelain and steel, to the injection-moulding of the Glock gun. He transformed my reading of the poem by linking the prefab house with the poem’s contemporary canzone stanzas, which “can be rolled out again and again” – and by interrogating the analogy between form and content in the context of domesticity and security “in post-9/11 society”.

I am also grateful to be introduced to dg nanouk okpik, an Inupiat, Inuit, raised by an Irish and German family in Anchorage, Alaska. Her ‘Date: Post Glacial’ begins:

Burt’s piece on ‘Date: Post Glacial’ is short and direct. He brings knowledge of okpik’s work to bear in clarifying the split pronoun as a “composite persona, both poet and animal (usually poet and whale)”. He discusses, precisely, the potential impacts of climate change. He finds a brilliant way of placing the poem’s tense: “okpik offers neither a protest against the bad present, nor a look at a traditional past, so much as a near-future ecotopia.” His facts and thoughts amplify the poem’s unfamiliarity. He makes me want to read more. 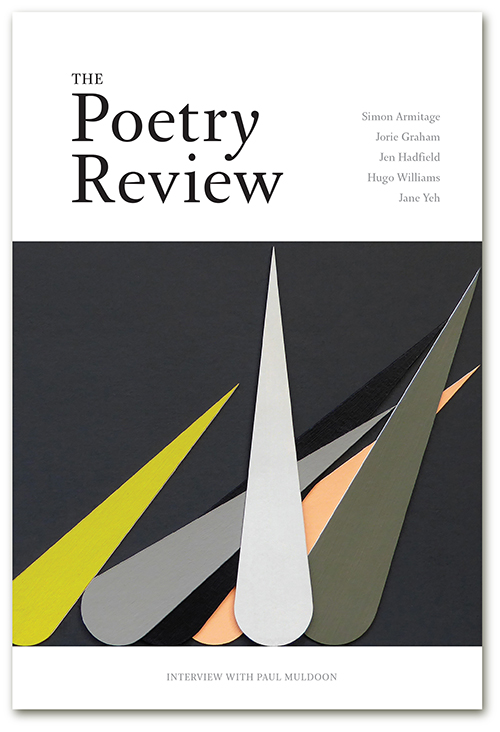