It seems appropriate to start with a line from one of Murray’s own poems:

There’s a small tale I’d like to tell you here. A bit sad I believe.
Not too sad! 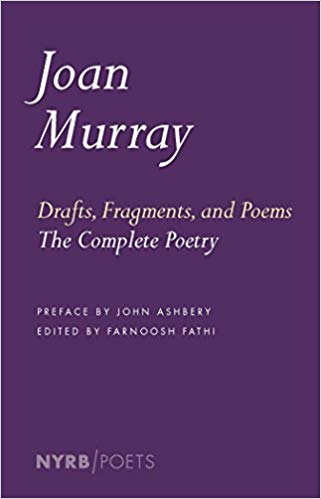 because the story is a bit of a sad one. Murray was born in London in 1917 to Canadian parents. When she was eleven she became ill with rheumatic fever, an illness which left her heart damaged. She suffered recurring attacks, nearly dying in her early teens, and this meant her life was one where rest was demanded of her. The writing collected in this book suggests that rest was ferociously resisted. She created a large body of work, including poems and plays, and these are collected for the first time here, along with drafts and fragments, following the discovery of her mythic lost manuscript in Smith College’s archives. She died of congenital heart failure tragically young, at twenty-four.

Of all the things I identified with in Joan Murray’s writing, the opening of this untitled poem was perhaps the most powerfully relatable:

I’d spent the past couple of months attempting to finish my second collection – making those micro-adjustments that seem to require vast planes of uninterrupted “writing time” to resolve. My vast planes of writing time were spent: scrolling through Twitter with a nausea I last felt as a child waiting for the timidity of Sundays to end; going wild about other people’s poems; pulling up weeds (but leaving in the roots); finally tackling the hand-washing; pacing about desperate for my attention to be snagged on anything other than what I needed to do. It seemed to me that Joan got it.

Many other elements of her work appeal. It is full of pangs and I found it hard to get through a poem without finding something that would make me feel a little undone. ‘The Builder’ felt especially touching:

Oh I want to wander over the hills and down to the water
And if there is sea I want to pack it up to my arms
And let the blue globe of all that water fill my mouth
Rill up my head, my chest, burst out of the sullen seed of my loin.

The speaker seeks this consumption by the sea. In another untitled poem the speaker becomes the sea:

O to what shame toward my own first cause,
I find that like both sea and air I am two things
Crystal and clear and at the other hand sweet mad.

It is probably this that most draws me to Murray’s work; that and those pangs I mentioned: “I am here with arms arms asking without voice / For the stomach cannot always say something from the middle” – the pleading in that repetition of “arms”! It reminds me of a song by the British riot grrrl band Pussycat Trash – I was fifteen or so when I watched them perform in a dingy pub in Sunderland. “My arms are stretching to be big for you” they sang. It’s the only scrap of their songs I have retained. Murray’s poem continues, “What to say what to say that only arms can say it”. I am extending my reach just thinking of it. The desire for physical connection is palpable throughout, and I came to understand the sea imagery as quasi-erotic (the “slavering of waves”, “swaggering all sex wise and opening the sky”, its “profound surge”). This erotic tone can be found throughout the collection, as in ‘Sterility’:

There was a night when women’s breasts
Hung heaped above my sagging mouth,
And dripped their pure sensuousness like juice

Words that might well leave “one panting / In their smooth voluptuousness”. Elsewhere the wind has a “melancholy chastity”. I really admire this image-making. Murray has a talent for blending a weird hotness with something cool and possibly transcendent, bringing to mind Chloe Stopa-Hunt’s elusive and highly compressed work. Murray’s “I have seen hills and rhythm / Will not leave my head” (‘Ascetic: Time Misplaced’) made me rush back to read Stopa-Hunt. It’s not an image-for-image correlation, more something in the feeling. See for example Stopa-Hunt’s ‘Painting My Breasts’, published in tender in 2016:

Painting my breasts with
Tulips, like the
Dreadful things they are.

This bounding old
Heart held still,
In a cup, in white hands

For me, Murray’s poem ‘Ego Alter Ego’ states what is going on in both of their poetics: “As all small simplicities grow large / In voicing all so simply”. I also enjoy Murray’s spattering of compounds – “cherrycoloured”, “mistressthoughts”, “deepblossomed shecat” – and some slightly unhinged images: “slug trepidity”, “smile beserkly”, the sun “like a quick-sore running”.

The collection includes some of Murray’s letters, which I found fascinating for their lack of chit-chat or gossip. They are so wholly interior it’s as though they’re notes for poems or notes towards philosophy. I found myself wanting to lineate this excerpt:

Like children we are always gazing out of window! In all my head there is no new thoughts. Where is this god who throws the very solar system out of gear for aspirant youth? I believe that is the basis for some stupidity…

Or to steal a fragment: “Here’s the night spreading her knees so wide I’ve struck the moon and the first star”.

I found it interesting to read her on being a writer. Searching for that mysterious feeling, which I can only describe as “poemy”, she writes to her teacher Auden, “I have been trying hard to hit something of the spot in myself that produced the Eclogues”. To a friend she writes, “I have all the multifarious demands of creation to battle against, the worst of which is a hideous perfectionist complex that kills everything cold.” That feeling of isolation due to losing touch with what feels so elemental to the self: “The strangest sort of mood has finally collapsed upon me […] Now I am utterly winded by the fact that I don’t care a tinker’s dam about reading or writing […] or not dreaming, or not.” In another letter, “It’s so utterly bewildering to know just how to write decently somehow.” I was mentally running a neon highlighter over that last phrase.

There’s lots I admire about the “particular swimming” of Murray’s thoughts, but even if in your reading you grant yourself the false comfort of “these were written in different times”, I can’t get over the use of racist language in a few of Murray’s poems. For example, the “Mongoloid fool”, in an untitled poem featuring a “creature of no-race” who nonetheless is “slit eyed” with a “saffron yellow seasick face”. Or a poem loaded with a kind of white-middle-class sentimentality “in the voice of a young black boy”. I wonder why this language wasn’t acknowledged in the introduction or in other writing on Murray’s work by Mark Ford and others. I asked myself why those poems were included. Then, to my shame, I realised I’d leapt first to erasure of the racist language (wouldn’t it make me so much more comfortable not to know those poems were there!). I had to ask why we rescue from obscurity Joan Murray’s work, when others who have been systematically excluded from publishing, from critical discourse, and from having the opportunity to be read for centuries, have not had such opportunity. In her introduction to this volume Farnoosh Fathi comments, “Murray belongs to a radical arc of American metaphysical women poets, most of whom still remain unsung”. That, of course, is also true.

I’m cautious of valorising Joan for her early death and mythic route to rediscovery. When Auden selected her manuscript for the Yale Younger Poets series, publishing it some five years after she died, he said, “We are not publishing her poems out of charity, because she will never be able to write any more, but because they are good, and I hope the reader will approach her work just as objectively as if she were still alive.” I’m glad for Fathi’s faithful restoration of the poems, which in their earlier Yale edition had been “prepared for publication” by the editor – Grant Code, a family friend of Murray’s – a process which flattened some of the more interesting and unusual elements of her style.

John Ashbery wrote that Murray is by definition a poet of “uncollectedness”, of incompleteness. It seems to me that she captures a kind of exquisite isolation – a “distant majesty”. A “ridiculous” letter to her friend Helen Anderson ends with, “It is splendid that you are so unalone”. Somehow this new edition of her work ends Murray’s isolation, makes her unalone with all of us who read it. 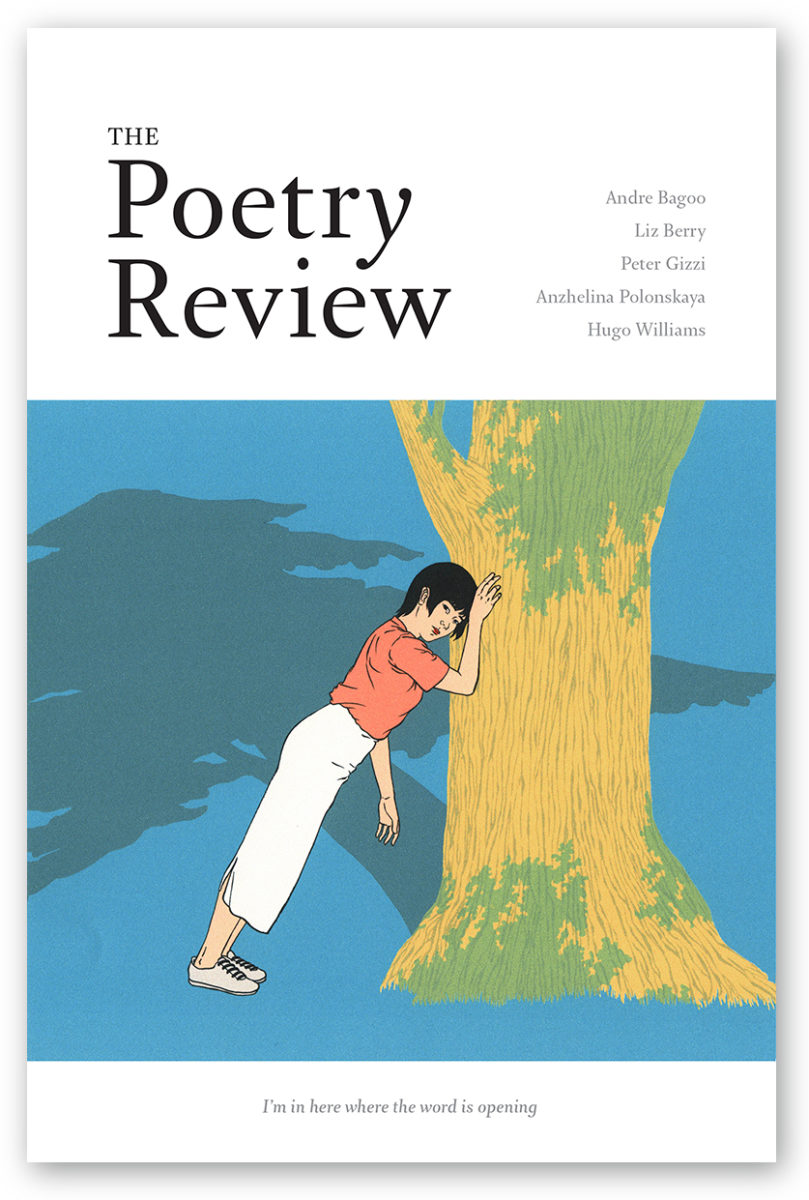 Amy Key’s second collection, Isn’t Forever, has just been published by Bloodaxe. © The Poetry Review and the author.