Alistair Noon on the poetry and politics of Brecht 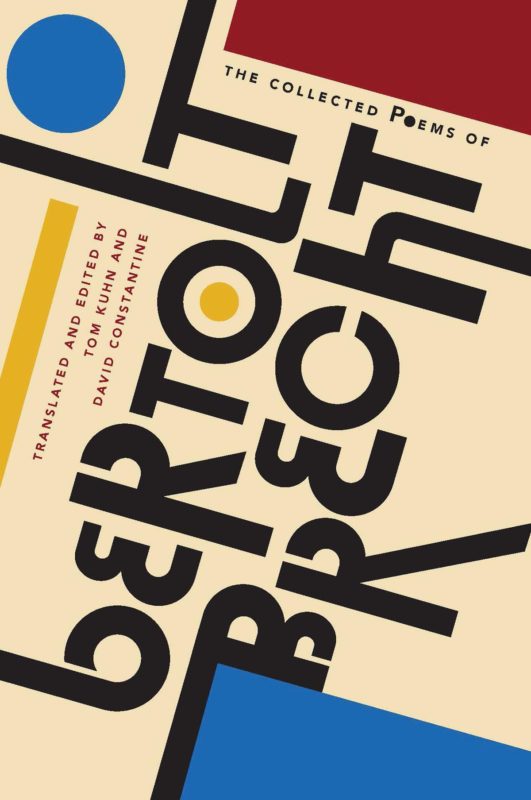 In 1927, the judge of a German poetry competition opted not to award a prize to any of the four hundred poems entered, reporting that all of them were – quite literally – “useless”. The judge was Bertolt Brecht, and there were plenty of reasons for a German writer of his time to consider how poetry might or might not be useful, not least the living conditions of the German working and workless poor: when Brecht wrote about the hungry, he was (again) being literal. The usefulness of literary work would become even more of an issue for him later, when the Nazis took power and he went into Scandinavian exile, and then in America where he witnessed how advanced capitalism affects everyday human interaction.

A perceptive recorder of his own exile experience, and an observant political chronologist, Brecht is best known as a poet for his encapsulations of historical moments, frequently framed as rhetorical questions. Tom Kuhn and David Constantine’s sweeping new twelve-hundred-page translation includes such classics. “Why do I watch the changing of the wheel / With impatience?” Brecht asks as the realities of the nascent GDR dawn on him in 1953 (‘Changing the wheel’). Fourteen years earlier he writes: “What times are these, when / A conversation about trees is almost a crime / Because it entails a silence about so many misdeeds!” (‘To those born after’). The fact that a conversation about trees is one of the things worth having right now only brings Brecht’s point, made in an era of fascist ascendancy, better home.

Not atypically for famous poets, however, Brecht’s most famous poems are atypical. His political poems are more often answers than questions, favouring forms that afford maximal didactic scope: the fable, the hymn parody, the mock nursery rhyme, and above all the ballad, the latter often with lengthy, even unwieldy refrains. Brecht certainly gets closer to a genuinely political poem than most poets do, not merely raising social issues and demands but articulating an actual agenda: whether, in repurposing poetry for the social struggle, he articulates a new subjectivity is more moot.

His early work thinks hard about why people at the hard end of the economic system fail to act to improve their own lot. He has an eye for the daily dilemmas faced by those living at or below the subsistence minimum, and sees that the poor bear the brunt of wars that are not in their interest. He identifies the delusions of capitalism and fascism but falls, perhaps knowingly, for the illusions of Stalinism and its by no means innocent precursor, Leninism. As he begins to see Russian-led state socialism as the only viable vehicle for resistance and change, poems start to dabble in the relevant personality cults. But a criticism of such cults can be read in ‘Empedocles’ shoe’, a version of the tale of the Greek philosopher’s death: Brecht has him lay a false trail to delay his disciples’ discovery of his leap into Etna. Fascinatingly, the final pages of this volume include Brecht’s versions of full-on anti-Stalinist poems by the Polish poet Adam Ważyk.

Brecht is good on the Nazis, revealing their warping of language, the impossibility of their promises, and the instrumental nature of anti-Semitism, as well as mercilessly dissecting the complicity of Germany’s industrial, judicial, medical and media elites in the regime. Yet a poem such as ‘The Song of the SA Man’ is a ‘we-wuz-deceived’ fantasy that tries to explain away how large parts of the German proletariat had turned sharp right, contrary to what they should have done according to Marxist theory, a fantasy in fact denying them the agency that the theory accords them. This exculpatory view ironically aligns Brecht – on this point – with the immediate post-war West German consensus (and got him into a spat with his fellow literary exile in Los Angeles, Thomas Mann, who thought post-war Germany deserved everything coming to it).

The contradictions continue. Brecht has a sensibility for issues specifically weighing on women in the world he describes, including childcare, exploitative relationships and prostitution. There are eulogies and elegies for the women in Brecht’s life who did the legwork to facilitate his writing, including Helene Weigel, Margarete Steffin and Ruth Berlau. But while seldom belittling women directly, he nevertheless objectifies, ventriloquises and subordinates them, leaving a sense of misogyny that pervades the early work and peppers the later. Most fundamentally, Brecht instructs his readers to think for themselves, while largely excising ambivalence and ambiguity from his poems. With his exhortations to do this and do that, Brecht situates truth within (his) text and not in its relationship with the reader, in the generalisation rather than the specifics.

The translator-editors help make sense of this sprawling, conflicted work with pertinent introductions and judicious notes (in the case of an otherwise dreadful poem called ‘Sauna and sex’, they include the amusing information that Brecht signed it in his notebook as “Thomas Mann”). They give us many poems I doubt the later Brecht would have considered useful, revealing the subcurrents and latent alternative paths in his work: his very early quasi-Expressionism, not yet inflected by irony and self-righteousness, and lyrical, personal poems, all passed over in Hundert Gedichte, the last major gathering of his work in his lifetime, presumably for lacking usefulness.

There’s a lot to get in Brecht: the oscillation between low and high marked forms in the obscene song and mock German classical hexameters, between the carefully versified and the prosaic. Over such a long stretch, form is inevitably reflected with varying degrees of intensity in the translations, but ‘Song against war’ is one of many bullseye renditions with the meaningful rhymes it finds in English (“victorious” / “wars for us”, “classes” / “masters”). Another is ‘The ballad of the waterwheel’:

And the waterwheel just goes on turning
Fortunes come and go – you know the deal.
While the water down below must keep on churning
Its only business is to drive the wheel.

A further issue is what to do with the brutality of much of Brecht’s language, which catches – but also re-sounds – the militarised tone that prevailed in German between the rise of the Prussian officer class in the late nineteenth century and 1968. In ‘A ballad for Article 218’, a male doctor bullies a woman out of an abortion in a pull-yourself-together and do-your-national-duty way. In the translation, the doctor is paternalistic but also a little avuncular. Notwithstanding the poet’s, translator’s and reviewer’s lack of first-hand experience of this situation, this could be a plausible cross-cultural or cross-temporal translation, cashing in historical specificity for immediacy. Across the translations, the brutality seems somewhat toned down in the English, likely for want of an immediately available counterpart in the more genteel, obfuscatory language of the British Empire.

Much of Brecht’s work is not a polite reaffirmation of beauty and wonderment for those with the time to wonder, but a gauntlet thrown down before liberal democracy, certainly in its guise prior to the welfare state. Can you feed us? Can you clothe us? Can you save us from fascism? But despite the efficacy of the Soviet Union’s PR machine, and notwithstanding the sheer necessity of opposing the Nazis, there were causes for doubt about the line Brecht took even before he got to live in a Stalinist state himself: the Soviet Union’s lethal political scapegoating in the 1920s, the show trials of the 1930s, the Hitler-Stalin pact of 1939. The fact that when exile became imperative for Brecht he chose Scandinavia and ultimately the US rather than the USSR has long been cited as evidence that he had some knowledge of what was happening there (and could have happened to him). Where Brecht does let doubt into his poems, they frequently resolve back to certitude, as if he were a job interviewee admitting to impatience as his greatest weakness, only to demonstrate his drive.

Hannah Arendt, who wrote at length about Brecht, carefully differentiated between philosophy and politics, the former concerned with truth, the latter with power. Where does poetry fall? The first Brecht poem I read, as a student, was ‘Beds for the night’, in which he cleverly – usefully even – flips round the lines of his preceding stanza to show that charity will never change the world. I remember being very convinced by its argument, and now wonder why Brecht, watching his driver changing the car wheel, doesn’t go and get him a coffee. 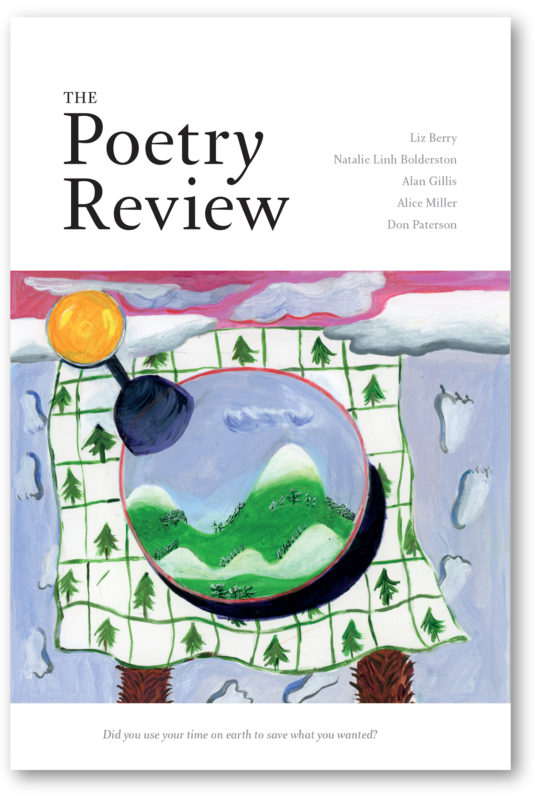 Alistair Noon’s translations of selected poems by Osip Mandelstam, Concert at a Railway Station, were published by Shearsman in 2018. He lives in Berlin. This review was first published in The Poetry Review, 109:4, Winter 2019. © The Poetry Review and the author.