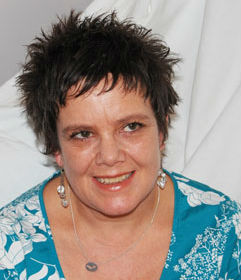 The inaugural Anne Born Prize has been awarded to the poet Suzanne Batty, whose poem was published in the Autumn 2013 issue of Poetry News. Suzanne wins a year’s worth of mentoring from Penelope Shuttle, who judged the competition.

“It was [the] human boldness in language and concept that made her work stand out. Her very individual subject matter combined with a flowing control over language and form results in poems that are rich with startling yet adept images such as ‘my father’s nervous beauty’, and ‘when I opened my mouth I vomited water hyacinth’.” She adds, “Each poem has versatile, nimble and memorable articulation, be it the uncertainties and complexities of family life, the evoking of an historic figure in the grip of intense emotion, or a dream-like Christ-figure on a train journey from Mumbai – the reader is constantly surprised.”

Suzanne has been writing poetry for a number of years, and lectures in creative writing at Sheffield Hallam University. Her first poetry collection, The Barking Thing, was published by Bloodaxe in 2007. She is excited that the prize will help her to develop her work further, and explains, “I’m hoping that I will finish my second poetry collection with the help of Penelope Shuttle and the mentoring project and also make a start on something new. At the moment I need both encouragement and ruthless criticism. Having such an experienced and exciting poet as Penelope to work with, I am feeling more optimistic about finishing it this year. And hopefully beginning some new poems.”

Suzanne works extensively using creative writing as a tool for healing and sees it as an important part of the work she does. She explains, “I’ve used creative writing, particularly poetry, to work with people experiencing and recovering from extreme mental distress for many years – in the community and on acute inpatient wards. I believe that any creative intervention can be incredibly healing, but writing is particularly good because it gives a voice to people who tend to be silenced, dismissed, even ridiculed; it enables them to bear witness and to rewrite stories that are doing them harm; to create beauty out of terrible suffering and confusion.”

Suzanne and Penelope will work together over the coming year via email conversations to work on selected poems, and one face-to-face meeting.

The American critic, Helen Vendler, says that “a good poem (with the exception of light verse, parodies, etcetera) has some sort of pain or moral urgency behind it that has compelled its writing into existence.” This was certainly true of many of the poems submitted for this award.

My choice of winner is Suzanne Batty. Each of her three poems is striking and complete in its own very different terms, and I look forward very much to working with Suzanne on her second collection.

I was asked to choose one winner but I felt that I’d also like to name three additional highly-commended poets to reflect the strength of my shortlist. Congratulations, then, to Carole Bromley, Alyss Dye and Hilary Jupp.

Penelope Shuttle has lived in Cornwall since 1970, is the widow of the poet Peter Redgrove, and has a grown-up daughter Zoe, who works in the field of sustainable energy. First published as a novelist, she has since published eleven poetry collections, with Oxford University Press, Oxford Poets/Carcanet and Bloodaxe Books. Her ninth collection, Redgrove’s Wife (Bloodaxe Books, 2006) was shortlisted for both the Forward Prize and the T.S. Eliot Prize in 2006. Sandgrain and Hourglass (Bloodaxe Books, 2010) is a Poetry Book Society Recommendation. Her latest book, Unsent: New & Selected Poems 1980-2012(Bloodaxe Books, 2012), is drawn from ten collections published over three decades plus a new collection, Unsent.

Shuttle’s work is widely anthologised and can be heard on The Poetry Archive Website. Her poetry has been broadcast on BBC Radio 3 and 4, and her poem ‘Outgrown’ was used recently in a radio and television commercial. She has been a judge for many poetry competitions, is a Hawthornden Fellow, and a tutor for the Poetry School. She is current Chair of the Falmouth Poetry Group, one of the longest-running poetry workshops in the country.