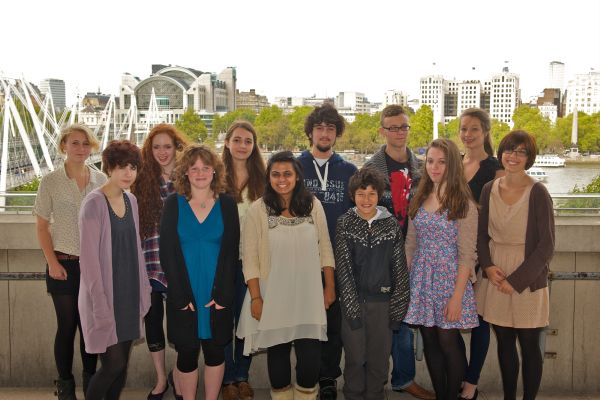 One hundred winners (85 Commendations and 15 Overall Winners) were selected by our judges, Imtiaz Dharker and Glyn Maxwell, and received their awards at a prize-giving event on National Poetry Day, 6 October 2011.

We celebrate another record for the Foyle Young Poets of the Year Award, which this year attracted submissions from a staggering 7,215 young poets from a total of 43 countries. Founded by the Poetry Society in 1998, the competition has been supported by the Foyle Foundation since 2001, and is now firmly established as the key award for young poets aged between 11 and 17 years.

The quality was, as ever, of an impressively high standard and judges Glyn Maxwell and Imtiaz Dharker had their work cut out choosing the top fifteen and 85 commended poets. The judges were struck by the level of maturity in their work. “They are placing themselves in the social world – not just looking inward but outward to their social environments and understand themselves in a very mature way,” said Maxwell. “These young people are saying ‘If I’m going to be a poet, I have to step up and face these things’.”

Glyn Maxwell is an established and critically-acclaimed poet, novelist and playwright.  His collection The Breakage (1998) was nominated for the T.S. Eliot Prize and The Nerve (2002) won the Geoffrey Faber Memorial Prize.  He has written a number of plays including Broken Journey (Time Out Critics’ Choice), The Lifeblood, Anyroad and The Only Girl in the World. His radio play, Childminders, was broadcast on BBC Radio 3 in 2002. He has also written opera libretti, including The Girl of Sand  with composer Elena Langer, and a libretto based on Euripides’ The Birds with composer Ed Hughes which performed at the City of London Festival 2005. Blue Burneau (1994), his first novel, was short listed for the Whitbread First Novel Award. He is currently adapting Umberto Eco’s The Name of the Rose for Moving Pictures Theatre Company. His latest poetry collection, Hide Now, was published in 2008, and shortlisted for the 2008 T. S. Eliot Prize and the 2009 Forward Poetry Prize (Best Poetry Collection of the Year).

Imtiaz Dharker was born in Pakistan, raised in Glasgow, and now lives between London and Mumbai. She is the author of five poetry collections: Purdah and other poems (1988); Postcards from god (1997); I speak for the devil (2001); The terrorist at my table (2006); and Leaving Fingerprints (2009) (Bloodaxe). She works as a documentary film-maker in India, and is also an artist, having shown solo exhibitions in the UK, India and Hong Kong. Her work has been described by critic Bruce King as “consciously feminist, consciously political, consciously that of a multiple outsider, someone who knows her own mind, rather than someone full of doubt and liberal ironies”.