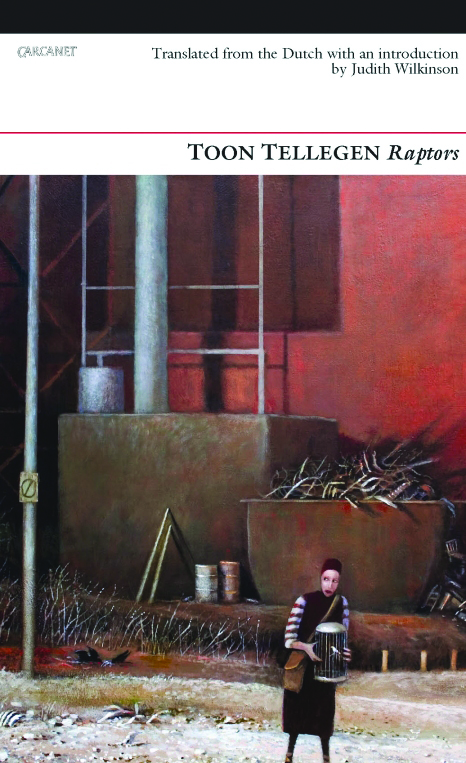 The 2011 winning book was Judith Wilkinson’s translation of Raptors by Toon Tellegen (Carcanet, 2011). Selected from a shortlist of six, Raptors, Tellegen’s poem sequence about a dysfunctional family, marks a major Dutch writer at the height of his powers, and is a “sustained tour de force” of translation.

“His [Tellegen’s] complex, often surreal and always highly affecting poems exhibit an understanding of the power of the story in which the dream-like psychology, the marvellously nuanced telling of a family’s malaise set him apart as an entirely distinctive voice in European poetry” say judges Sasha Dugdale and Jane Draycott.

Toon Tellegen (born 1941) is a novelist, playwright, memoirist, popular children’s writer and poet with more than 20 collections. He has won numerous prizes and awards, including two in 2007 for his entire body of work.  An opera, The Cricket Recovers, based on his children’s stories, was performed in Britain in 2005.

Judith Wilkinson is a British poet and translator, concentrating on contemporary Dutch and Flemish poetry. Her work has received a Poetry Book Society recommendation and several Pushcart nominations. In 2008 she won the David Reid Poetry Translation Prize. She lives in Groningen, the Netherlands.

Judith Wilkinson received £1,500 and was the subject of a celebratory close reading event at Aldeburgh Poetry Festival on Saturday 5th November 2011.

What the judges say: There is an exuberance and energy about these poems – poems for the voice and for performance, which nonetheless sit beautifully on the page and move easily between playfulness and a great humanity. Ramsey Nasr in David Colmer’s translation has a strong appeal to new generations of poetry readers.

What the judges say: Martinson’s large canvas – from the global to the local – and the extraordinary beauty of his poems make this a compelling and important addition to our understanding of European twentieth century poetry. Robin Fulton maintains the strangeness and the delicate apprehension of Harry Martinson’s poetry.

What the judges say: George Messo’s important project reveals a new and hardly known group of poets in a selection of lively, haunting and distinctive translations. This is a book of voices from another poetic world, whose achievements (as Messo writes) are ‘as relevant now as they ever were’ and whose voices are as vivid as they ever were.

What the judges say: Jennie Feldman’s and Stephen Romer’s generous act of advocacy gives us a fresh new insight into French poetry. Their subtle translations are worn lightly: the acuteness of their ear and their gentleness of touch seem a perfect match for the lovely unassuming originals.

What the judges say: Judith Wilkinson’s translation captures the weird spoken nature of Toon Tellegen’s ‘novel in verse’ and it matches the energy and rhetorical span of the original. These haunting monologues expand our understanding of the power of the voice in poetry.

What the judges say: This engaging book, with its series of poetic short stories and its wry wit is a wonderful addition to the Romanian poetry we have in translation. The deadpan narratives, so deceptively simple and arch, are translated with rhythm and skill.