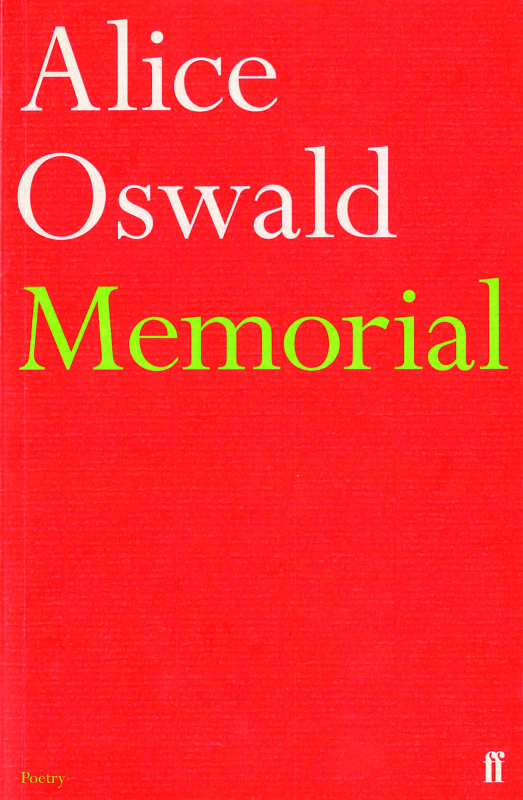 Memorial, Alice Oswald’s excavation of Homer’s Iliad, was the winner of the Poetry Society’s Corneliu M Popescu Prize 2013 for poetry in translation.

Oswald’s excavation of the Iliad is a radical retelling that at once translates and transforms this ancient text into a deeply moving exploration of the horrors of warfare in any age.

This year’s winner was chosen from a selection of 79 submitted books, representing 26 languages. Judges Karen Leeder and David Wheatley said “Oswald has turned Homer into a contemporary war poet, taking an audacious concept – the trimming down of the Iliad to its death scenes – and imbuing the results with compelling formal necessity. Memorial answers to its Greek original yet stands as an autonomous and deeply moving work of art.”

Watch a film of Alice Oswald reading an extract from Memorial, or read the press release.

Ciaran Carson, for In the Light Of: after Illuminations, Arthur Rimbaud, pub The Gallery Press | French

What the judges say: “Among the different meanings of Rimbaud’s title, Illuminations, is a book of coloured plates. An illuminated manuscript for the modernist age, the Illuminations shine in Ciaran Carson’s translation.

What the judges say: “I could have been born in another place /within another idiom’, writes Luljeta Lleshanaku, in lines that acquire a prophetic edge in these fine translations, like some latter-day Double Vie de Véronique, holding Eastern and Western Europe in delicate balance.”

What the judges say: “Kristiina Ehin’s poem ‘How to explain my language to you’ ends with a moment of epiphany ‘in a language neither yours nor mine’, and these fine translations explore the meeting points in which the strange and the familiar find common ground.”

What the judges say: “Mallarmé is the strong enchanter of French symbolism, and in these versions Peter Manson has carried an entire body of work across into English with authority, conviction and compulsive readability.”

What the judges say: “Hélène Dorion enters English with Racinian purity and economy, finding her material among the sublime abstractions and voids from which Anglophone poets instinctively shy away.”

Alice Oswald, for Memorial: An excavation of the Iliad, Homer, pub Faber | Greek

What the judges say: “Alice Oswald has experimented with reading her poems twice, live, and gives us each of Homer’s rich similes on the double in Memorial, but hers is a poetry to which normal concepts of diminishing returns do not apply: this is a poetry whose rewards grow not just with each rereading, but before our eyes, first time round, too.”

What the judges say: “‘What is your message?’ asks Manuel Rivas in ‘Missed Call’, but these translations show that, as well as being what gets lost, poetry in translation can be about what gets through, the connections we make, and the voices we hear loud and clear.”