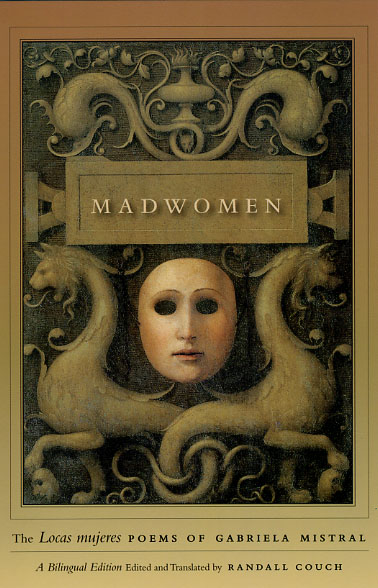 Randall Couch won the Corneliu M Popescu Prize for Poetry in Translation 2009 for his superb translation of Gabriela Mistral’s Madwomen.

Randall Couch edited and translated Madwomen: The Locas mujeres Poems of Gabriela Mistral (University of Chicago Press, 2008). He is a regular panelist on the podcast series PoemTalk sponsored by the Poetry Foundation, PennSound, and Kelly Writers House.

He has published essays and book chapters on Ezra Pound, Gabriela Mistral, and Harryette Mullen. His poems have appeared in numerous journals and have been anthologized in Best New Poets 2005 and Xconnect: Writers of the Information Age VIII. In 2000 and 2008 he was awarded fellowships in poetry by the Pennsylvania Council on the Arts.

As Adjunct Professor of English at Arcadia University, he has taught advanced poetry writing and poetics since 2003. From 1989 he has served on the professional staff of the University of Pennsylvania. Trained as an art conservator, between 1980 and 1989 he held positions at the Northeast Document Conservation Center, U.T. Austin’s Harry Ransom Humanities Research Center, and the Philadelphia Museum of Art.

He holds a BA in English from Trinity University and an MFA in poetry from the Warren Wilson College MFA program for writers.

Gabriela Mistral (1889–1957) is one of the most important and enigmatic figures in Latin American literature of the last century. The Locas mujeres poems collected here are among her most complex and compelling, exploring facets of the self in extremis—poems marked by the wound of blazing catastrophe and its aftermath of mourning.

Mistral’s poetic women confront situations to which no sane response exists. Through the masks of madness the poet voices transgression—questioning power, gender, survivorship, and the cost of her own worldwide fame. This groundbreaking collection presents poems from Mistral’s final published volume as well as new editions of posthumous work, featuring the first English-language appearance of many essential poems.

Randall Couch has performed a remarkable task of editorial spadework, gathering a coherent set of Gabriela Mistral’s last poems from various sources and creating an informed context that enables an appreciative reading. He has thus renewed the afterlife of a modern Chilean poet who, despite her status as a Nobel Laureate, remains on the fringes of the canon of Spanish poetries in English. It is Couch’s sensitive translations, however, that play the most decisive role in this renewal: he has transformed the challenging Spanish texts into English poems characterized by resonant diction and forceful rhythms, effectively recreating Mistral’s impassioned imagery and complex metrics.

Randall Couch’s translation of the Locas mujeres of Gabriela Mistral recreates in English some of the most important poems of the past century. Written in the voices of women who are witnesses to war and violence of many kinds, and completed during a period when Mistral herself was such a witness, these poems are at once devastating in their emotional clarity and astonishing in their lyrical beauty and formal complexity. Couch’s readers, even those who already know the poems in Spanish, will be grateful to him for the sympathetic care he has brought to the tasks of editing, introducing, and translating this distinguished edition of Mistral’s work.

This collection deploys the best of the best, revealing for the first time these poems of anguish and triumph from the winner of the 1945 Nobel Prize in Literature. Randall Couch matches her brilliance, depth and range. Here is her direct witness to war and Holocaust, dispatched from Southern France and Brazil, her revisions of Greek tragedy, written in occupied Europe, and her serene and uncompromising, Buddhist-Franciscan defense of the land and indigenous cultures. Here, in stunningly contemporary terms, is the protean complexity of one of the greatest poets of the 20th century.

Utterly remarkable—Gabriela Mistral turns out to be a great poet of modernist intensities and compactness, and darker preoccupations, as well as being that more conventional ‘pastoral’ poet who was awarded the Nobel Prize. Randall Couch’s translations are sonically superb—he has an almost uncanny ability to create a rhythm in English lines that not only is very pleasing and authoritative in itself but also makes for an excellent representation of Mistral’s own rhythms.

Elaine Feinstein is a poet, novelist, short-story writer, playwright, biographer and translator. Her most recent poetry collection is Talking to the Dead (2007) dedicated to the memory of her husband, Arnold.

Stephen Romer is a lecturer at the University of Tours in France. His latest collection of poetry is Yellow Studio (2008) shortlisted for the T.S. Eliot Prize. Stephen Romer is also the editor of 20th Century French Poems.