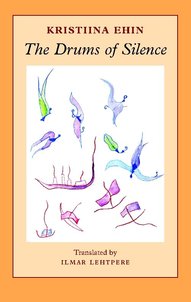 Ilmar Lehtpere won the Corneliu M Popescu Prize for European Poetry Translation 2007 with his translation of The Drums of Silence by Estonian poet Kristiina Ehin, published by Oleander Press.

The Judges were Francis Jones and Anne Born.

Ilmar Lehtpere had a bilingual upbringing in Estonian and English. His translations of Estonian poetry have appeared in various literary journals in Europe and America. With The Drums of Silence Lehtpere provides a faithful and precise translation from the original Estonian, allowing the poems to graduate with sincerity and literary authority to another life in a new language.

Lehtpere described winning the award as “the greatest honour that a poetry translator can receive.” He went on to say that poetry translation in the UK is under-represented, particularly by bookshops. He hopes that this prize will counter this, but he also felt that translation needed to be promoted and supported more, by grants and similar support for translators’ fees. “In Estonia,” he said, “translators’ fees are fully paid for by the Estonian Cultural Foundation.”

Kristiina Ehin is one of Estonia’s most beloved poets, having won the country’s most prestigious poetry prize. Her work reflects the influence of the traditional Estonian folk song, which dates back over two thousand years. It is honest, uncompromising, deeply personal, universal and utterly free from poetic fashion and convention. In Ehin’s poetry the judges found an approach to describing the natural world that was at once shamanic, drawing on deep historical traditions, but at the same time extremely of the moment all – of which are reflected beautifully by Lehtpere’s translations.