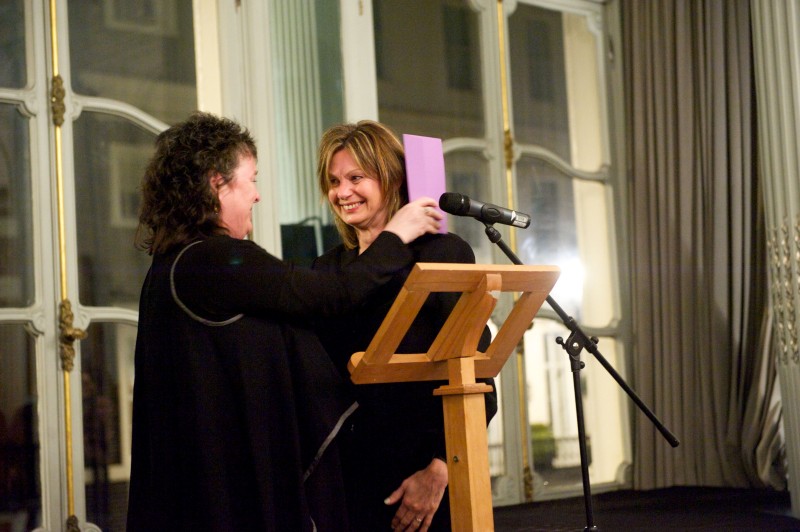 “This is an ambitious multimedia presentation using film, voices and sound, which works exceptionally well. It is a challenging, painfully open account of a daughter’s addiction, yet it’s an account which also offers graceful good humour. Beautifully written and uncompromising, it’s a modern story that we felt the writer was compelled to tell; it acts as a vivid witness of harsh experiences which aren’t often described in poetry, and Maggie Sawkins’ illuminating descriptions will prove helpful for others to hear.” – Denise Riley, Judge

The judges considered work in a wide variety of forms for the award – from radio-plays and installations to books and sound works – including a number of interdisciplinary collaborations. They selected a shortlist of five, including Maggie Sawkins: Steve Ely, Chris McCabe, Hannah Silva and Zoë Skoulding.

The £5,000 prize is gifted by Carol Ann Duffy, funded from the annual honorarium the Poet Laureate traditionally receives from HM The Queen. Maggie was presented with her prize by Carol Ann Duffy at an award ceremony at the Savile Club, London, on 28th March 2014, alongside the winner of the National Poetry Competition 2013. Now in its sixth year, the Ted Hughes Award for New Work in Poetry is awarded annually to recognise excellence and innovation in poetry. It is one of the only awards to acknowledge the wide range of work being produced by poets – not just in books, but beyond.

Zones of Avoidance is a multimedia live literature production written and performed by Maggie Sawkins and directed by Mark C Hewitt with video sequences by artist Abigail Norris. Sawkins describes it as ‘A Word Dance into the Void of Addiction’. The narrator’s quest is to discover the lure of psychoactive substances following her daughter’s descent into addiction. This multi-media live literature production captures the surreal mundanity of living with addiction and combines the poet’s moving testimony with the voices of addicts in recovery. Zones of Avoidance was first performed as part of Portsmouth Bookfest in October 2013. The collection Zones of Avoidance was published in 2015 by Cinnamon Press.

Oswald’s Book of Hours is a series of elegies and eulogies for Oswald redivivus, written in the voices of an unlikely band of northern subversives, including NUM leader Arthur Scargill, hermit Richard Rolle, brigand John Nevison, Catholic rebel Robert Aske – and Oswald himself. Oswald’s Book of Hours is an ambitious attempt to rehabilitate an organic English identity via an exploration of radical, pre-industrial and pre-reformation traditions, and a handbook of devotions for the exiled and expropriate English settled north of the Humber. Oswald’s Book of Hours is published by Smokestack.

“As a northern woman, I was intrigued by these poems which speak with an uncompromisingly male northern voice. They are brilliantly written, provocative, exciting, earthy, funny and shocking. Curiously, I found that I most enjoyed the riveting voices of particular historical characters. This work moves effortlessly from the ancient past to contemporary days.” – Eileen Cooper

Pharmapoetica is collaboration between Poet Chris McCabe and Medical Herbalist and Artist Maria Vlotides. Initially conceived as an art installation consisting of a “medical cabinet of poems” about plants used pharmacologically, it has developed to include an accompanying book, a formulary of sorts, that not only contains the ten poems but images of the installation and working notes on which the poems are based. Pharmapoetica is published by Pedestrian Publishing.

“Two books in one book: Chris McCabe’s ten poems – ‘alchemical and transformative processes of language’ – are mirrored by ten texts, each about its own herb, by Maria Vlotides, artist and medical herbalist. The book has grown from an installation about the pharmaceutical uses of plants and is described as something like a ‘formulary’, suggesting the ritual/medicinal two-fold life of ‘poetry’.” – Sean Borodale

Maggie Sawkins for Zones of Avoidance

In 1972 Stan Gooch published The Total Man, notes towards an evolutionary theory of personality. This extensive volume spans magic, religion, politics, art, morality and justice. Gooch discusses topics including whether or not Labour MPs have larger ears than Conservatives, and neurotics larger ears than psychotics. In this new commission, poet, playwright and performer Hannah Silva channels Gooch and explores his story through a musical layering of words, speech, quotations and virtuosic linguistic and vocal play. Total Man was commissioned by Penned in the Margins and Mercy for Electronic Voice Phenomena.

“Hannah Silva’s entrancing sound creations are designed to spring to life in her performances. Her work is often startling yet delicate. ‘Total Man’, part of the Electronic Voice Phenomena events, shows Hannah’s capacity to work easily with thoughts about sound through sound itself, as she generates her new music with its fresh echoes.” – Denise Riley

Zoë Skoulding for The Museum of Disappearing Sounds

The disappearing sounds of Zoë Skoulding’s new collection may be either in the rich sonic environments that the poems observe, or in the resonance of words themselves, which exist in traces of speech and breath. Skoulding’s characteristically inventive approach to form emerges in a fractured sonnet sequence based on the coincidences of room numbers. Repeated actions build haunting interior spaces which the reader is invited to enter, each poem becoming a room in which sound ‘bounces off four walls’, as memory accumulates in the subtle rhythms of everyday life. These poems can provoke states of eerie unease, or of passion evoked with shimmering densities of verbal texture. Exploratory and alive to the senses, The Museum of Disappearing Sounds creates new perspectives on language and the world in which it exists. The Museum of Disappearing Sounds is published by Seren.

“These are poems of disappearing sounds, of the fugitive and durable energy of sound itself, and the richness of the sonic environment; poems in which words and sounds and voices and traces of speech are re-discovered; rooms in which ‘a pattern unfolding’ gathers energy from the half-life of sounds into a reconstruction of song; both a collection of poems and a museum of collections.” – Sean Borodale

Sean Borodale was Northern Arts Fellow of the Wordsworth Trust in 1999 and Guest Artist at the Rijksakademie, Amsterdam in 2002. From 2002-7 he was a teaching fellow at the Slade School of Fine Art, UCL. His long topographical work Notes for an Atlas was recommended by Robert Macfarlane in theGuardian Summer Books 2005. It was performed in 2007 at the Southbank Centre’s Royal Festival Hall, directed by Mark Rylance, as part of the first London Festival of Literature. Recent projects include Grey Matter with artist Jonathan Houlding which included a residency at the Fundacion Pilar i Joan Miro, Mallorca, 2009. Bee Journal, his debut full-length collection of poems was published by Jonathan Cape in 2012. He was selected as a Granta New Poet in 2012 and was recently shortlisted for the T.S. Eliot Prize and the Costa Book Award.

Painter and printmaker Eileen Cooper RA studied at Goldsmith’s College and Royal College of Art, London. She was appointed Keeper of the Royal Academy Schools in 2011, the first female officer of the RA since it was founded in 1768. She has had solo exhibitions at Air Gallery, Benjamin Rhodes Gallery and the Dulwich Picture Gallery (all London); Castlefield Gallery, Manchester; Artsite, Bath; and Glasgow Print Studio. Eileen Cooper at 50 was shown at Art First in London and New York. Her work has featured in many group and international touring exhibitions including: The New British Painting; The Outsider: British Figuration Now; Picturing People and Innocence and Experience. She has been represented by Art First since 1997 (Image credit: Anne Purkiss)

Denise Riley has a background in both poetry and academia. She is currently Professor of Poetry and the History of Ideas at the University of East Anglia. Riley’s many collections of poetry includePenguin Modern Poets 10 (with Douglas Oliver and Ian Sinclair), and Denise Riley: Selected Poems. She edited Poets on Writing; Britain 1970-1991. Her recent work studies philosophies of selfpresence, the neurophenomenology of selfawareness, and the history of understandings of inner speech and how these enter into our ideas of what’s interior and what’s outside. Her long poem sequence ‘A Part Song’ won the Forward Prize for Best Single Poem, and was shortlisted for the Ted Hughes Award (both 2012). (Image credit: Kevin Lake)