Congratulations to the winner of the Ted Hughes Award for New Work in Poetry, Hollie McNish, for her poetic memoir Nobody Told Me (Blackfriars). The result was announced at an awards ceremony on 29 March. 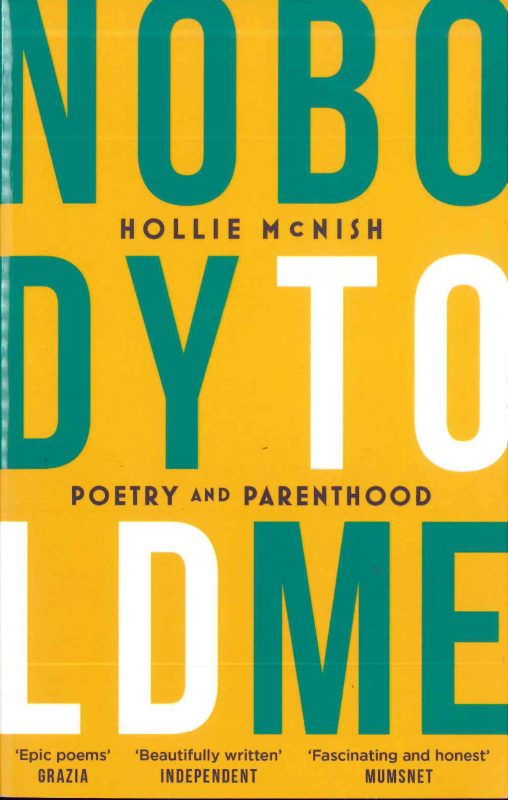 ‘Adrian Mitchell said that “most poetry ignores most people” but Hollie’s book puts things that most people ignore right back in the spotlight. This book is more than the sum of its parts, combining the immediacy of a diary with straight talking poetry from a spoken word tradition. This book is funny and serious, humane and consciousness-raising: it changed the way I think about women (and I am one). Should be given to every new parent, and handed to them along with their baby-care products.’

‘There is a long and honourable tradition since antiquity of works alternating between prose memoir and poetry based on it – works like Dante’s Vita Nuova and Basho’s Narrow Road to the Deep North. Nobody Told Me is a classic case of this mixed form. Hollie McNish describes the experience of pregnancy and young motherhood in a vivid language that brings both forms to life, and makes them real for readers to whom these things are new as well as those to whom they are familiar.’

‘Nobody Told Me is a book that should be sold alongside Caitlin Moran and Bill Bryson. Honest and insightful, it will resonate outside the poetry world to reach a new generation of poetry readers. Hollie McNish skilfully tackles hidden agendas and political issues in our society such as public breast-feeding, non-waged care work and interracial relationships, as well as the love, joy and judging of mothers.’

“I felt anxiously underqualified at being asked to judge the Ted Hughes Award for New Work in Poetry. It soon became a mass undertaking of carrying books from tour to studio. But the wealth of joy and excitement in these worlds, as well as the sheer variety and beauty, was like having new lives poured into me. I feel very proud of the scope of the shortlist, which came after joyous discussions with the other judges about what hit us hardest and why. I am so honoured to be part of this process and thankful for all the new work that I have read that sits inside me now.”
Kathryn Williams

The winner of the 2016 Ted Hughes Award for New Work in Poetry will be revealed at the Ted Hughes Award and National Poetry Competition Award Ceremony on 29 March 2017. It’ll also be announced on our website, and via @PoetrySociety on Twitter. 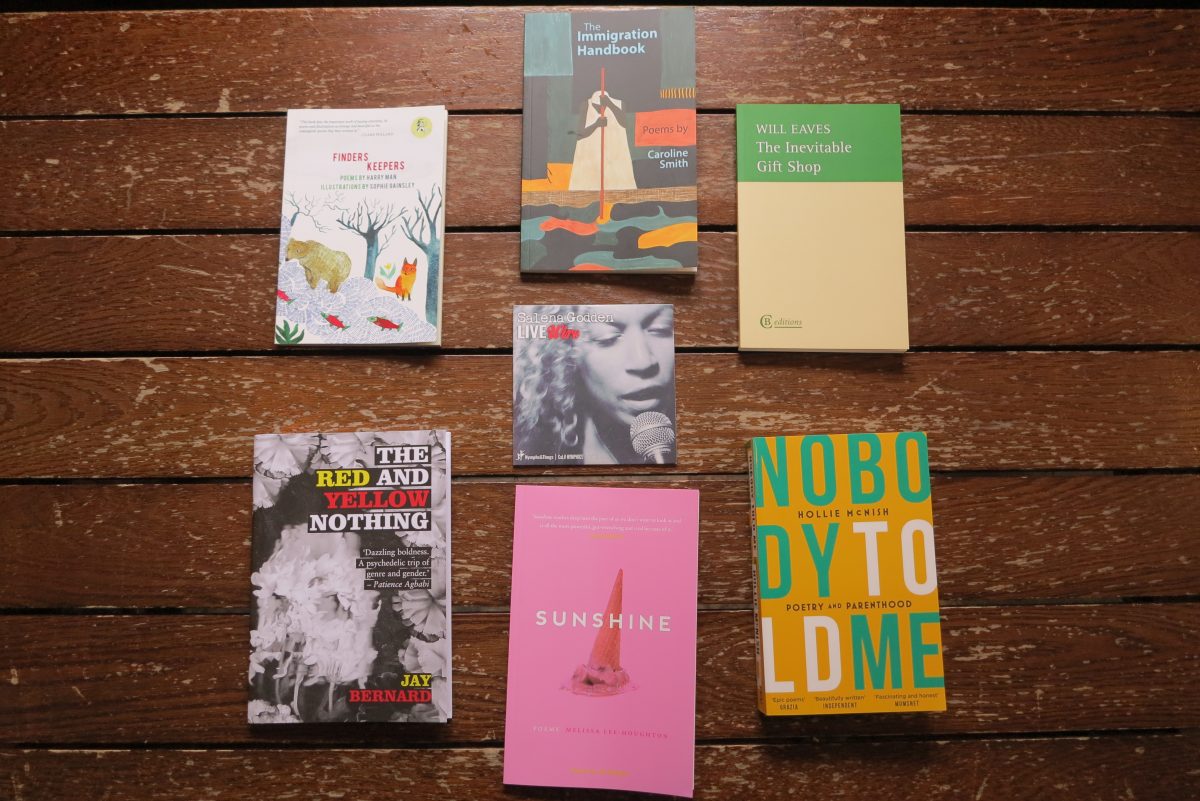 Jay Bernard – The Red and Yellow Nothing

The Red and Yellow Nothing is a pamphlet-length collection of poems produced after winning the IS&T/Café Writers Poetry Pamphlet Commission competition. The poems – paired with occasional images and framed as a prequel to the Middle Dutch poem ‘Morien’, which tells the story of a Moorish son of a knight of the round table – are an inquiry into the idea of blackness in Europe before it became synonymous with a less romantic history.
From the judges: “This collection is an adventurous pilgrimage through style and form reclaiming medieval myth. It is beautifully paced with a musical momentum and demands to be revisited.”

Will Eaves – The Inevitable Gift Shop

An intriguing, complex and revealing mixture of prose and poetry, The Inevitable Gift Shop is a ‘memoir by other means’, lassoing consciousness, memory, desire, literatre, illness, flora and fauna, and problems with tortoises and cable ties. Produced by CB Editions, it was a Poetry Book Society Special Commendation.
From the judges: “This accomplished collection is an original compilation of different kinds of writing and thinking. It is clever, witty and philosophical, a subtle long playing book which unfolds with every reading.”

LIVEwire is a poetry album, performed, recorded and produced by Salena Godden. It is a collection of live and studio recordings, festival and theatre archives and brand new work. It features live material from literary childhood memoir Springfield Road (Unbound), Fishing in The Aftermath – Poems 1994-2014 (Burning Eye) Under The Pier (Nasty Little Press) and The Good Immigrant (Unbound) The double album showcases a broad range of styles, from late night raucous party pieces to more reflective and quieter poems – The ‘Daytrip A-side’ is for your headphone moments and the ‘Dirty B-side’ for after the watershed.
From the judges: “This CD captures the best of a live presence – at turns moving, powerful and
unflinching – which is hard for an award to recognise. It provides a gateway to poetry that is too easily dismissed as ‘spoken word’, but is an essential part of our poetry culture.”

Sunshine is a full-length collection of poems which take an unflinching first-hand look at abuse, addiction and mental health, with a dark sense of surreal humour.
From the judges: “This collection throws a full beam on the underbelly of life. Melissa Lee-Houghton writes with a fierce working class anger producing poetry which is explicit and uncompromising.”

Described as a poetic field guide to Britain’s vanishing wildlife, the book Finders Keepers contains poems and colour illustrations that are the culmination of a year-long project which has seen Harry Man and illustrator Sophie Gainsley geocaching their work in public spaces across the country. It is a project that seeks to memorialise the many species that have been brought to the brink (and beyond) of extinction.
From the judges: “This collection is a symbiotic relationship between poetry and illustration. Image and text inventively flow in and out of each other, playing with form and colour. There is an integrity to the poetry which is both charming and precious, making you look again at the environment and your own back garden.”

Hollie McNish – Nobody Told Me

Hollie McNish keeps diaries in the form of poems and stories, written sitting on her daughter’s bedroom floor, in the gaps between cries, screams and laughs, on the loo, in the car and anywhere else she can find the time and space. Nobody Told Me is a collection of these entries as poetic memoir, documenting parenthood and addressing all the things she felt she couldn’t talk about at the time, including love, sex, feeding, gender, ice cream, race, commercialism and finding secret places to scream every once in a while.
From the judges: “This collection breaks new ground reporting from the front line of motherhood. Poetry and prose mix well creating an internal rhythm that is conversational and honest. Hollie McNish deals with big issues without flinching from inadequacies and failings whilst reaching out to new poetry readers with her accessible style.”

The Immigration Handbook is a full-length collection of poems that allow us to meet refugees as individuals that the news stories only speak of as numbers: characters who have experienced lives fraught with violence and tragedy, and who are dealing with labyrinthine government bureaucracies. Caroline Smith, who worked as the asylum caseworker for a London MP, humanises the immigration problem by introducing us to the people who are affected.
From the judges: “An important and unsentimental collection which humanises and individualises refugees without inappropriate occupation of another voice.

Jo Bell’s awards include the Charles Causley Prize and Manchester Cathedral Poetry Prize. Formerly director of National Poetry Day, she performs her poetry in live and collaborative stage shows, on radio and in venues across the UK. She was the Canal & River Trust and The Poetry Society’s inaugural Canal Laureate from 2013-2015. Jo’s global workshop the 52 project is now a best-selling book. Her latest collection Kith is published by Nine Arches Press.

Bernard O’Donoghue was born in Cullen, Co Cork in 1945. Since 1965 he has lived in Oxford where he is now an Emeritus Fellow in English at Wadham College. He has published seven volumes of poems of which the most recent is The Seasons of Cullen Church (Faber 2016).

Kathryn Williams is an English singer songwriter. Each of her 10 albums has received huge critical acclaim, and her second album, Dog Leap Stairs, was nominated for a Mercury Music Prize. Touted as “the songwriter’s songwriter”, she has tutored at Arvon and hosts her own writing retreats for other artists and songwriters. She has worked and toured with artists including John Martyn, Sandie Shaw, Chris Difford, Bombay Bicycle Club, David Gray and Ray Lamontagne, and has also featured on albums as part of her bands The Pond and The Crayonettes. Her latest album Hypoxia, inspired by  The Bell Jar, arose from a writing commission for Durham book festival to commemorate Sylvia Plath. She has recently toured this album, showcased it at literature festivals throughout the UK. She is married with two children, and her house is a tip that she plans to tidy one day.