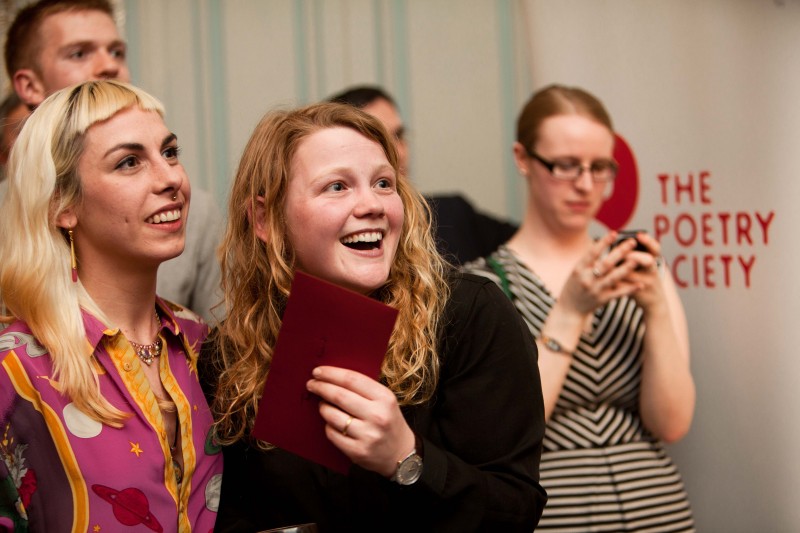 Making the announcements, the judges commented that:

‘Our brief was to find the most exciting contribution to poetry this year.  We judges were unanimous in feeling that Kate Tempest fulfilled this with knobs on! Lorca wrote that “a play is a poem standing up” Kate’s poem stands up in every way. Kate Tempest has created here an ambitious, unforgettable mythology and made us look at the world afresh.  Kate’s work is full of promise for the future of poetry’

The £5,000 prize is gifted by Carol Ann Duffy, funded from the annual honorarium the Poet Laureate traditionally receives from HM The Queen. Kate Tempest was presented with her prize by Carol Ann Duffy at an award ceremony at the Savile Club, London, on Wednesday 27 March 2013, alongside the winner of the National Poetry Competition 2012. Now in its fourth year, the Ted Hughes Award for New Work in Poetry is awarded annually to recognise excellence and innovation in poetry. It is one of the only awards to acknowledge the wide range of work being produced by poets – not just in books, but beyond.

An hour-long spoken story told over a live orchestral score, Brand New Ancients tells the tale of two families as they intertwine and collide, all set against the epic back drop of mythology and the city. Kate Tempest’s touring show was produced in partnership with Battersea Arts Centre, with a score composed by Nell Catchpole in collaboration with and performed by Kwake Bass, Raven Bush, Natasha Zielazinski and Jo Gibson.

Colette Bryce for Ballasting the Ark – Poem-films produced by poet Colette Bryce, working in collaboration with artist Kate Sweeney, as part of her Leverhulme  residency at the Dove Marine Laboratory, Cullercoats; and accompanying short book of poems published by Newcastle Centre for the Literary Arts. Bryce’s work responds to the location of the laboratory, the creatures of its flow-through seawater aquaria, and strands of science such as ballast water treatment and offshore wind turbine technology. Image: Phyllis Christopher

Roy Fisher for Locklines – Roy Fisher has written a series of elliptical short poems for Hillmorton Locks, installed on the Oxford Canal, near Rugby, as part of the Locklines project. Sculptor Peter Coates designed, carved and inlaid the lines of poetry onto green oak lock gate beams, created for locations requiring replacement gates this winter. Fisher has also written for Farmer’s Bridge Lock, Birmingham. Locklines is produced by Chrysalis Arts as part of a wider partnership between the Canal & River Trust and Arts Council England in association with the Poetry Society. Image: Jemima Kuhfeld

Ruth Padel for The Mara Crossing – In ninety varied poems, interwoven with illuminating prose interludes, Ruth Padel’s original book weaves science, myth, wild nature and human history to conjure a world created and sustained by migration. The Mara Crossing(published by Chatto & Windus) explores the ways in which we are all ‘from somewhere else’.

Mario Petrucci for Tales from the Bridge – Commissioned by the Mayor of London,Tales from the Bridge was the world’s largest 3D poetry soundscape, launched on the River Thames as a centrepiece for the 2012 Cultural Olympiad. Mario Petrucci’s innovative poetry script for two voices was built into a haunting score composed by Martyn Ware (in collaboration with artistic director David Bickerstaff ), to create a full-immersion poetic experience spanning London’s Millennium Bridge. Encompassing the history, geology and economic functions of the river, alongside its local life and metaphorical potencies, the poem bears witness to the enduring role of the Thames as the city’s lyrical, silty heart.

Denise Riley for A Part Song – Denise Riley’s ‘A Part Song’ is an elegy or lamentation in different modes, written in response to the death of the poet’s son. A sequence in twenty sections, it first appeared in the London Review of Books and publication was accompanied by a podcast of Riley reading the poem.

Tamar Yoseloff for Formerly – Formerly is a collaborative exhibition by Tamar Yoseloff and Vici MacDonald commemorating forgotten corners of a London now fast disappearing. Yoseloff has written a cycle of fourteen irregular and anarchic sonnets, created in response to MacDonald’s grainy photographs of superannuated shop fronts, council estates and industrial sites. The show premiered at the Poetry Café and has toured to the Poetry Library. Image: Derek Adams

Maura Dooley’s most recent collection of poetry is Life Under Water (Bloodaxe 2008). She has edited anthologies of verse and essays, amongst them The Honey Gatherers: Love Poems (Bloodaxe 2003) and How Novelists Work (Seren 2000). She has worked with new writers consistently, with the Arvon Foundation, Performing Arts Labs, the Southbank Centre, Jim Henson Film and currently Goldsmiths College, University of London. She has twice been shortlisted for the T. S. Eliot Prize and is a Fellow of the Royal Society of Literature. Image: David Hunter.

Ian Duhig has written six books of poetry, most recently Pandorama (Picador, 2010). He has also worked with artists, historians, film makers and homeless people as well as a range of musicians, from the pre-baroque consort The Clerks to the contemporary avant-garde composer Christopher Fox. He is particularly looking forward to seeing innovative ways of using poetry among recommendations for the Ted Hughes Award. He has won a Forward Prize, the National Poetry Competition twice and three times been shortlisted for the T.S. Eliot Prize.

Cornelia Parker received an OBE and was elected to the Royal Academy of Arts in 2010. She was nominated for the Turner Prize in 1997. A major publication on her work will be published by Thames & Hudson in 2013. Recent solo exhibitions include Thirty Pieces of Silver, at York St Mary’s (in association with Tate) in 2011, and Doubtful Sound, at the Baltic Centre for Contemporary Art in 2010. Locations of forthcoming solo exhibitions include the Frith Street Gallery, London, in 2013 and the Whitworth Art Gallery, Manchester, in 2014.