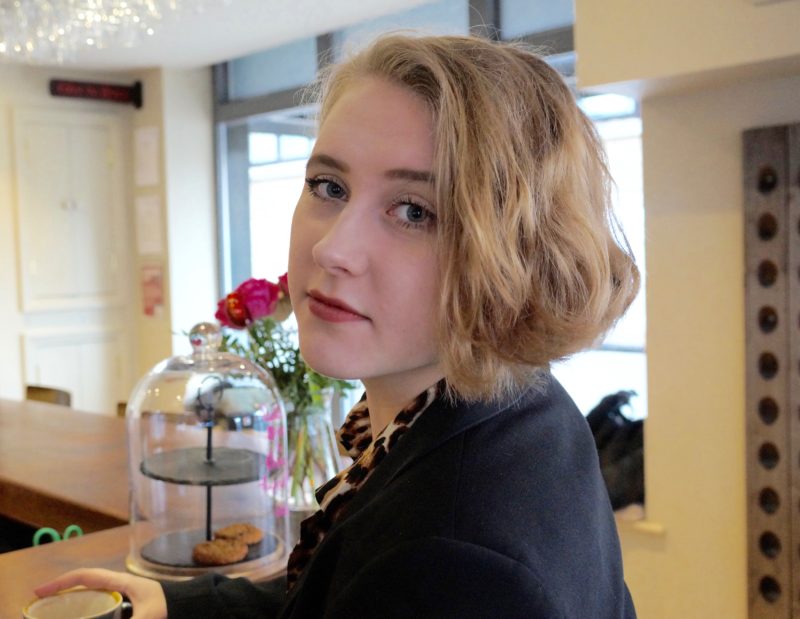 Phoebe Stuckes, a four-time Foyle winner, has been awarded the Geoffrey Dearmer Prize for the best poem in The Poetry Review – an award specially for writers who hadn’t published a full collection when their work appeared.

Judge Fiona Benson chose Stuckes’s ‘Thus I became a heart-eater’ from the Winter 2019 edition of The Poetry Review, guest-edited by Colette Bryce. “I love the poem’s rebellion, its honesty, its self-disgust, its despair and its resilience,” Benson writes in this summer’s Review. “I have been that woman. I see that woman, and I will her on into her life.”

Phoebe Stuckes, whom Mike Sims, Editor of Poetry News, interviews below, declared herself “completely delighted” with her prize, especially as she is such an admirer of Benson’s work. As well as winning the Foyle Award, Stuckes is a Barbican Young Poet and was Ledbury Festival’s young poet in residence in 2015. Her pamphlet, Gin & Tonic (Smith|Doorstop, 2017), was shortlisted for the Michael Marks Award and in 2019 she won an Eric Gregory Award for her debut collection Platinum Blonde, which will be published in September by Bloodaxe.

Mike Sims Can you tell us a bit more about ‘Thus I became a heart-eater’? I found it interesting to go back to the title once I’d finished the poem. It appears to be about disappointment in love, but in its argument it seems to uncover a strategy for dealing with that.

Phoebe Stuckes Yeah, I think the poem is circular and you can look at the title at the end and be like, oh, okay, that’s what that was all about. Eating anything heart-shaped feels sort of weird and visceral to me, like that scene in the film Raw where she eats the raw chicken right out of the fridge.

I think my strategy for dealing with heartache is, among other things, to stare into the abyss that is the Krispy Kreme cabinet in Tesco Metro. I have a lot of poems set in Tesco Metro, an emotionally fraught space by anyone’s standards. I remember they had these heart-shaped doughnuts with a little happy face on them, and I was feeling sort of lost and cynical because I thought, as I often do when disappointed in love, that my ideas about relationships and other people were utterly horrible and wrong. I was looking at the face of this idiotic little doughnut and I was like, really? Has it come to this?

Mike Sims Jean Rhys, Ford Madox Ford (as well as Harrison Ford!) – there’s a period feel to your literary reference points. Are you playing with the contrasts between old modes and contemporary attitudes?

Phoebe Stuckes Yes, I like the idea of the speaker in my poems being a sort of 1920s It Girl, going to endless parties, drinking a sidecar out of a shoe. I think a lot of the poems I’ve been writing lately exist in the same linguistic space as pop songs which tend to have this slightly out-of-time language, the lyrics are things like “Don’t call me”, as if, up until recently, the singer had been waiting daintily next to a rotary phone. I like the idea that the emotions are real but the speaker is a character, almost like being in drag, where the performance embodies a heightened version of femininity and life in general.

Mike Sims Very excitingly, Bloodaxe is about to publish your first full collection, Platinum Blonde (a title which also has a period feel). How has that come together?

Phoebe Stuckes Yes, it is exciting! I can explain the material reality of submitting ten poems initially and then sending the full manuscript and getting the edits back from Neil (my editor), but how did I write the book – it seems weirdly mysterious now. I wrote most of it during 2018 and I put all the excess energy I had into writing poems for the book. I sat down once every day and tried to write a poem. When I read it back I can recognise how my emotions felt very powerful then, almost unmanageable at times. I was filled with this toxic mixture of anger and longing and I was feeding all that to the book. It was a process of transformation, making something unproductive and negative into something I created that I think is beautiful.

Mike Sims I like the “impressive nightmare” you picture in ‘Gold Hoop Earrings’, your other recent poem in The Poetry Review. Can you say more about that persona?

Phoebe Stuckes I love an antihero, a female antihero especially, because they are rarer. I’m obsessed with this Chelsey Minnis line: “If you’re afraid of me, then go lock yourself in a cage”, like if you’re scared of me, that’s your problem not mine. I often get told I’m scary when I’m just being myself. I also tend to gather strength from writing and reading women with high self-esteem. I watched an interview with the fiction writer Ottessa Moshfegh where she looked the interviewer dead in the eye and described herself as “a very serious writer”, and I thought holy shit, me too, why have I never admitted that before? I’m deadly serious when it comes to writing.

Listen to Phoebe reading ‘Thus I became a heart-eater’ and find out more about the prize in the Geoffrey Dearmer webpages. This article first appeared in the Summer 2020 issue of Poetry News, The Poetry Society’s newspaper packed with news, interviews and competitions, every quarter. Join and never miss your copy!