Skip to content
Home >Competitions >Geoffrey Dearmer Prize >2015 >Laura Scott Interview: “There is a still a tension in my poems, because there always will be”
News About Search Donate Shop

Laura Scott won the Geoffrey Dearmer Prize 2015 with her poem ‘The Half-loved’. She spoke to Mike Sims about her work 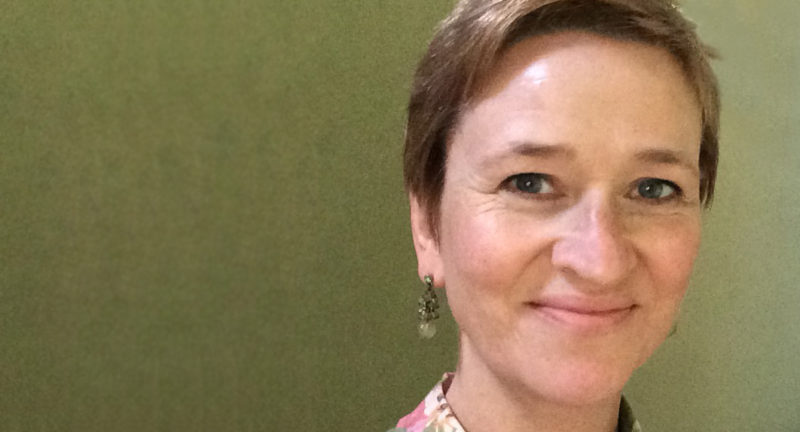 Mike Sims: In your Rialto blog on your residency at Harvard University’s Hellenic summer school (as part of your Michael Marks Award 2014 for What I Saw), you write about Greek poets’ different approach to poetry, their use of “high-risk language” and readiness to write about the soul, death, love, beauty and myth. Has this had any lasting influence on you?

Laura Scott: I really hope the time in Greece has had a lasting influence on the way I write. I think it has given me more confidence, more nerve and maybe a new ease and openness to what it is possible to do in a poem, a new sense of scale. When I first got back I tried to hoard this feeling like an old miser, measuring out my Greek poems carefully with a strong feeling that there would only be a limited number of them, but I don’t think it is like that anymore. I’ve written four poems that come directly from the experience of being there  – one of them being ‘The dogs in Greece are different’ (published in the summer 2016 issue of The Poetry Review) – but I think there will be more. And anyway the way I write poems now is different. I used to write in an almost defensive way, as if the anticipation of what people might say about the poem had the effect of shaping it and maiming it before the poem had a chance to find its own form and its own movement. And I don’t do that anymore.

Mike Sims: I ask this not least because you’ve written very interestingly on our website about letting things “float” and “hover” but also “cutting back” your poem ‘If I could write like Tolstoy’, despite wanting a “rapturous” close. Are these key tensions in your writing?

Laura Scott: There is a still a tension in my poems, because there always will be; that’s one of the things that makes them poems – between the rapturous reaching out and the need to cut back – but I think the balance has shifted. I remember reading something Michael Longley said about how it was fatal for people to call themselves poets, and before I went to Greece, if anybody asked what I did, I’d say I write, and then if they prodded, I’d say, I write poems, I would never say I was a poet. But in Greece, I was there as a poet, people kept telling me I was a poet and I loved that. I met and read and talked with lots of poets.  So I suppose you could say being in Greece made me see that spending hours and hours arranging words on a page and trying to find an image that stretches itself willingly over the experience is a great thing to do with your time, and it’s what I do.

Mike Sims: The first few times I read ‘The Half-loved’, the poem for which Selima Hall awarded you the Geoffrey Dearmer Prize 2015, I thought I knew where the ‘fault’ lay – with the ‘half-loved’, a rather oppressive, unyielding, demanding figure. Now I find myself thinking how ‘half-loving’ is a hard thing to admit to, and how our sympathies are drawn towards the half-loved at the end. I wouldn’t want you to explain the poem at all… but I’d be interested to hear any comments you have to make.

Laura Scott: It took my ages to write ‘The Half-loved’. I started it when I was being mentored by Mimi Khalvati and then abandoned it. Mimi had encouraged me to write more directly about people, so the original impulse came from that. I liked the title but that was about it – the images were too full of intention. So I left it but then I went back to it years later, I’m not sure why, and I got the first line and the movement right of someone climbing the stairs and swaying in the doorway. And the rigidity that had constricted it just disappeared and the poem became its own thing with wallpaper and elephants and skiers and glasses of wine. I started to love its turns and it became sadder and weirder than I had wanted when I first tried to write it. And when I showed it to people, they seemed to like it which always surprises me because I think it’s a horrible poem but I’m really pleased that there is enough space in it for you to have had two very different reactions to it, because that unstable quality, the way it moves between the half-loved’s position and the half-lover’s is what I do like about it, and what I hope, stops it from being judgmental.

Mike Sims:Would you say your writing is political? I’m thinking of ‘The dogs in Greece are different’, your comments on Greece in your blog piece and maybe your poem, ‘A photograph of two girls’…

Laura Scott: I wouldn’t say my writing is political. It is interesting that you picked up on some of the things in the Rialto blog because when I originally wrote that, I didn’t say anything about the crisis at all, I rather reluctantly added those comments on at the end. Of course the debt crisis was an inescapable subject in Greece last summer, but I consciously didn’t want to write about it, because what I experienced, first and foremost, was hospitality. I couldn’t accept this expansive generosity and then go home and write about my hosts’ troubles and misfortunes: that would be mean and discourteous. I suppose that means I’m not a political poet. ‘The dogs in Greece’ has ended up sounding like a political poem but that was a bit of an accident really. It was supposed to be about the dogs, I spent ages finding out how dogs are like wolves and not like them. I was interested in the way all the stray dogs were starting to look the same, the same size, the same colours. And then when I was writing the poem, things started to tie up, I’d read an article about how the new airport on Athens had been built with a massive PPI-style European loan with an impossible repayment scheme and this was in the back of my mind when I saw photos of dogs moving in on the old airport. So at the root of the poem I’m trying to write about what I saw.

Mike Sims: How pleased are you to win? You haven’t been writing poetry so long, have you?

Laura Scott: I am so pleased to have won the Geoffrey Dearmer prize. I imagine that’s what everyone says, but I really am! I think it is great to have a prize for someone who doesn’t have a collection out yet. And I’m honoured to be in such good company, because I remember reading Zaffar Kunial’s poem, ‘The Word’, when it won and it thinking it was one of those pitch perfect poems that is incapable of putting a foot wrong.

Laura Scott is the winner of The Geoffrey Dearmer Prize 2015, awarded by The Poetry Society and The Poetry Review. Her poems have been widely published in magazines including The Poetry Review, Edinburgh Review, Magma, Rialto, Tate Etc and Envoi. Her pamphlet, What I Saw (Rialto, 2013), won the 2014 Michael Marks Award for a poetry pamphlet. She teaches at the University of East Anglia.