The doctor says it’s an empty room in there

But he did not enter
And dissolved himself into the sea so many moons ago
(Dorothea Laskey, ‘The Miscarriage’)

It is said that one in four women miscarry at some point in their lives. Yet why are there so few poems about miscarriage, something that many women evidently experience? Why is this private and unseen loss near invisible or taboo, to speak or write about? Dorothea Laskey’s poem was a discovery for me. And it is stark, perfect, detached, even. Its refrain, “Work harder!” speaks to the exhausting demands on women’s lives and bodies from a (western capitalist) society bent on the forward momentum of (re)production. Likewise, Fiona Benson’s lyrical poems about miscarriage from Bright Travellers (2014) reframe human loss via the natural world in ‘Sheep’ and ‘Prayer’. Sharon Olds and Lucille Clifton boldly describe the visceral experience of miscarrying. From this memory, both poets retrieve the lost child and imagine them into a (racial, marital, personal) history, where they otherwise have no physical presence in lived time.

you threw off your
working clothes of arms and legs,
and moved house, from uterus
to toilet bowl and jointed stem
and sewer out to float the rivers and
bays in painless pieces.
(Olds, ‘To Our Miscarried One, Age Thirty Now’)

These are some examples among what I suspect is a minor note in the canon of women’s writing. There has been, of late increasingly so, what seems like a flowering of poems and whole collections about motherhood. But how might poems about miscarriage, its silence, broaden our picture of maternity, a range of experiences, too often co-opted by the logic and language of productivity?

Sylvia Plath’s poem reflecting on her own miscarriage, ‘Parliament Hill Fields’, I already knew but had not read attentively. It is not the “bald hill” or “faceless” sky where the lost child’s “doll grip lets go” that stopped me on rereading it this time, but the line: “I suppose it’s pointless to think of you at all”. This teaches us something about grieving, perhaps, and its point. Although I also recalled reading Plath’s radio poem, Three Women, at least fifteen or more years ago, I never listened closely to the three voices in it. Perhaps I flipped past it, thought one day I might return to this poem about maternity when its consequences applied to me. Back then, I couldn’t differentiate clearly between the ‘happy’ mother of a son; the ‘reluctant’ mother who gives her daughter up; and, of course, the woman in between, the “Second Voice”, who miscarries. Now, for me, the second voice is the most compelling. She identifies as dying, dead, death. She has lost a “dimension”. She is pointless, flat, has created no new face. But other faces, the “faceless faces of important men”, nations, society, governments, all conspire against women who have the power to produce new living dimensions. Who are not otherwise pointless.

I am not ugly. I am even beautiful.
The mirror gives me back a woman without deformity.
The nurses give me back my clothes, and an identity.
It is usual, they say, for such a thing to happen.
It is usual in my life, and the lives of others.
I am one in five, something like that. I am not hopeless.
I am beautiful as a statistic. Here is my lipstick.

But grief is not pointless, its mourning or melancholy offers something when there is nothing to show for death. Where is the special language of grief given to women who miscarry? Does the expression of this particular grief rely on a borrowed tongue, more so than any particular love, or especial happiness, grief’s necessary antecedents? I look everywhere for a way to wrench it from the mouths of doctors and nurses. Stillbirths, yes, there are brave books. The deaths of children, too, who have taken breath. But so little I find beyond the ‘author unknown’ postings on websites – a pop-up asks if I want a “grief friend” – and the exchanges between women who carry a secret death that make friends and family flounder for the right words.

In Helen Charman’s powerful essay, ‘Parental Elegy: Language in Extremis’ (2017), she explores Complicated Grief Syndrome in poetry via Denise Riley’s Time Lived, Without its Flow (2012) and both Jahan Ramazani’s and Andrea Brady’s works on the elegy. Charman writes that “The relationship between productivity, parenthood and mourning reinforces, rather than alleviates, the ‘complicated’ problem of grief and narrative.” What are the ethics of producing poetry from grief, if that grief is pointless, finds no point, speaks back to death with an illegitimately and imprecisely acquired language?

You are no philosopher. Every time you speak of this kind of death you fear you are exaggerating. Death is real; what happened to you is not this but some unspeakable loss. A fact that cannot be explained by the framework of life, its order. You have no language of your own, only a remote vocabulary, borrowed from mourning mothers, hoarse as Demeters, each heroic – and you are not this fact at all.

When a woman with certain privileges is about to give birth there’s a slog of learning. Guides in print and thousands of websites. Most of which do not entertain other outcomes. Gradually, you pick it up, the knack of counting your life in weeks. Consider buying one of the many new books on motherhood, mostly by middle-class white women. You learn what it means to [redacted]. You feel the energy quietly being sapped away from you and the plurality of an internal conversation. When you inform the midwife you’re opting for a consultant-led birth, she’s surprised that “an intelligent woman like you would make that decision”. You throw her a forced smile. What must it be like to see you or some version of you over and over day after day. Making the wrong decisions. Not quite English. The NHS leaflets piled thick in your palm. The hostile posters on the wards threatening those without legal status. This woman of the State is disappointed in you. But, anyway, you never see her again. You stop talking to your selves.

The woman’s body is adrift. You find sisters to nurse you. Her body is a graveyard, A says. M explains: miscarriages haunt women down generations. S, who suffered a stillbirth, messages: this is a minor moment in a woman’s life that, at the time, feels major. B emails you a spell. D and V are both Americans; they advise on the right drugs and procedures. P, blood sister, doctor, keeps you talking: don’t go quiet on me. Miscarriage is its own language – clinicians keep it alive whereas women listen to its cold music and then forget, or try to. What would it be to keep this language in common use. To claim it back. Did women ever share ways to explain this to each other and to themselves? “Language cannot do everything”, Adrienne Rich advises in her ‘Cartographies of Silence’. “The scream / of an illegitimate voice // It has ceased to hear itself, therefore / it asks itself // How do I exist?”

M notes that in India even men know what a D&C is. Why is that. Your family would never acknowledge the shame that is pregnancy. Aunties moving heavy with sin that gave your sister and you nightmares for at least thirty years. Neither would they speak of female foeticide or amniocentesis, an antenatal means by which one can determine sex. But you know your aunties have heard this language misused against them. Those uncles who bluntly ask their wives or mistresses to cut into their insides by the right name.

You say, to your husband, “if all goes well”. You say you because it’s not your body. You imagine time reeling forward.

And, when the future stops, all is not well. You say “I”, but not aloud – an unspent curse. What is language anyway. An agreement. To make reparations. With whom. For what.

A world gone quiet must be this fact.
For which there is no precise language.
The monitor goes off and you are led
past a succession of mothers to a room marked “empty”.
Taxonomies of grief elude the non-mother,
the un-mothered, the anything-but-this-fact.
No face no teeth no eyes or balled-up fists.
To light the dark with a particular breathing.
A black lamp beats its wings ashore.

In the dark there is breathing.
After five visits to the hospital, the bruising
of inner elbows stitching themselves to themselves
in obsolescence, the nurses stop saying: sorry for your loss.
I may come to miss these laminated hallways.
I know my way there, to the artefact of losing.

Loosened from the factual world into a silence
where there is no grave but your own self stumbling
from floor to ceiling without an inch of your life.
Or mine. Or this particular absence.

The Lancastrian nurse is matter-of-fact.
Her metaphors are agrarian; the language of slaughter.
If you start bleeding like a stuck pig.
Under those thick white fingers an ancestry
of collapsing valves and bleating
transfigure into notes. You look familiar.
Why have you come here, again,
to my door with your metaphors of slaughter.

A folder, yellow, the word baby
on its cover, re-filed as miscellaneous.
What grew in you is not you but a shroud
and any idiot knows a shroud.
A ghost who wakes you up five times a night
stands undecided between rooms
shivering in its thin shadow.
I know my way here, to the language of loss.

My grandmother, who died giving birth,
explains what makes carnelian so red.
I assumed it was the iron in its veins
that made the Romans stamp their profiles
onto its brittle clots. Pulse of empire.

Don’t say that / I never visited you.
A ghost is as good a family / as you may get.
Va, itni der baad thusi aaye hai?
After all this time, you’ve finally come?
The child that clawed you towards death is my kin.
His bones are a line pressed into the earth
you never wanted to cross, transfigured on the back
of a convoy somewhere else. It must be this fact.

A village and its farms and its wells
On an ordinary day in August
smell of blood and panic
carrying a child from this and that
disease, whose death is on your hands.
You look familiar. Why have you come here.

Blighted or to blight. What gives up gives over
is absorbed back into itself like a harp gone quiet
imperceptibly in the night. 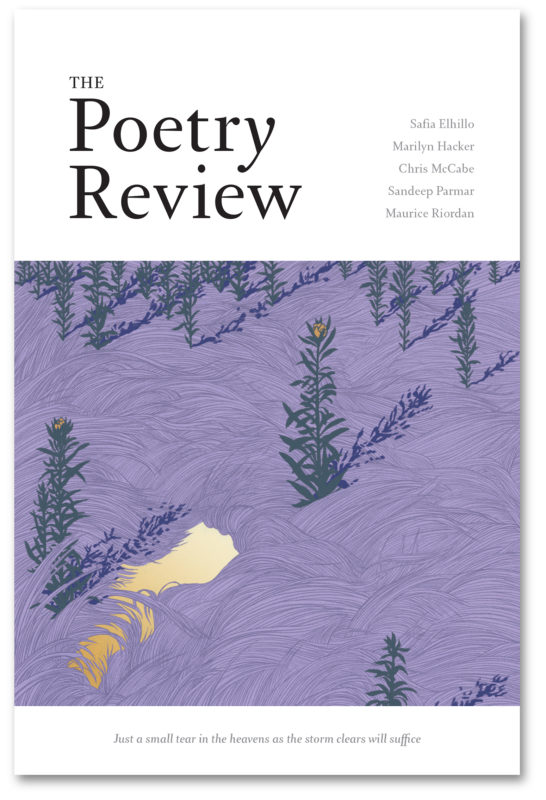 Sandeep Parmar is Professor of English Literature at the University of Liverpool. Her most recent poetry collection is Eidolon (Shearsman, 2015). This essay was first published in The Poetry Review, 108:3, Autumn 2018. © The Poetry Review and the author.