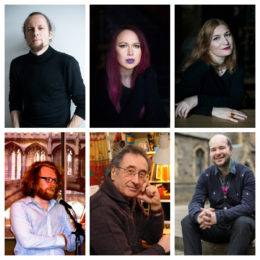 In this special focus event of the European Poetry Festival, some of the finest literary poets from Lithuania, nation of focus at the London Bookfair 2018, and their British contemporaries present brand new collaborations made for the night. Featuring:

The 21st century Lithuanian poetry scene has been marked by an unusually prolific and original array of poets. Often lyrical and engaged in a new formalism, connecting to those who oversaw the transition to independence, the new Lithuanian poet is also idiosyncratic, witty, often linguistically experimental, well travelled, and technologically savvy. While spiritually connected to the revolutionary underground spirit of creativity that underpinned some of the greatest poetry Europe produced while Lithuania was under Soviet occupation, there is a marked move to a new kind of poetic voice that speaks the same tone as the rest of its continent and is not necessarily framed by politics or history, but by vision, originality and humour.

This is a Lithuanian Cultural Institute event, supported by The Poetry Society.