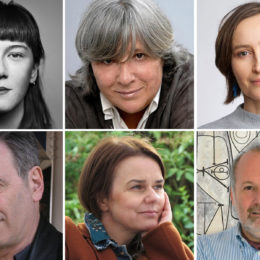 The poets have been brought together by EUNIC – European Union National Institutes for Culture – the European network of organisations engaging in cultural relations and collaborations in the service of international relations.

Charlotte Van den Broeck (b. 1991) holds an MA in English-German language and literature and is now studying Verbal Arts at the Antwerp conservatory. She twice reached the top 100 of the Turing National Poetry Prize and published in Het Liegend Konijn, Das Mag, De Revisorand DW B. She is already a household name as a performance poet. In 2015, on the advent of her debut volume ‘Kameleon’ (Chameleon), she was added to the line-up of the Saint Amour tour through Belgium and the Netherlands. In 2016 together with Arnon Grunberg she opened the Frankfurter Buchmesse where Flanders and The Netherlands were Guest of Honour in a very impressive way. In 2017 her second collection ‘Nachtroer ‘(Night Stirring) was published. At the end of 2019 her first book of prose saw the light to much critical acclaim. In thirteen chapters Bold Ventures tells the stories of architects that committed suicide inside or because of the building they established. In these stories Charlotte Van den Broeck also reflects on the meaning of failure and the development of her own writing. On 30 January 2020 her poetry essay Cosmos, Texaco, illustrated by Ward Zwart, will be presented during the opening show of ¨Poetry Week. In the meantime, her poems are translated in several languages and the English translation of her two collections by David Colmer will be published in February 2020 by Bloodaxe Books.

Ana Luísa Amaral is an award-winning Portuguese writer, literary critic and translator. She taught at the Faculty of Arts of Porto and has a doctorate on Emily Dickinson. She has authored over two dozen poetry books and children’s books and has translated several authors into our language, such as John Updike or Emily Dickinson. The poetry of Amaral was recommended by the New York Timesand is for sale online at Foyles.

Julia Fiedorczuk is a poet, translator, and literary critic who popularised the idea of ecopoetics. She was born on 23rd February 1975 in Warsaw. She holds a PhD in Humanities and teaches American literature, theory of literature, and English at the University of Warsaw. Many of her translations have been published in the Polish periodical Literatura na Świecie (World Literature). She also translated John Ashbery’s notable collection of essays Other Traditions into Polish (Inne Tradycje) as well as texts by Wallace Stevens, Forrest Gander and Laurie Anderson.

Mária Ferenčuhová (1975) is a poet and translator from the French (Paul Virilio, Amélie Nothomb, Philippe Sollers, Samuel Beckett, Jacques Rancière, Michel Houellebecq, Laurent Binet, Phillipe Brenot and Alain Mabanckou), who has also taught at the Film and Television Department of the Bratislava Academy of Performing Arts. Her four carefully constructed collections of poetry published to date reflect the theme of uprootedness, alienation, existential insecurity and immutable routine, partnership and mother-child relations stripped of pathos, as well as terminal illness and our threatened environment.  She has published five poetry collections and her work has been translated into Czech, French, Greek, Macedonian, Serbian and Slovene as well as English (Tidal Events, 2018; Shearsman Books, trans. James Sutherland-Smith)

Antonis D. Skiathas studied Chemical Engineering. Nowadays he lives and works in Patras, Greece. He is a poet, anthologist of poems and literary critic. Antonis Skiathas has published 10 poetic books: Border Cemetery (1983),The horse of the waves(1990), Border Cemetery (1992), Summer Windsock (1993), Fantasies of a Walker(1996), Hail, Century (2002), Traces of people (2006), Poems Summary (2006), Spring Eros Anniversary (2008), Hospitable City (2010), Evgenía (2016). Poems of him have been included in Greek and internatio- nal anthologies, and have been translated into 11 languages. His articles and essays on poetry and history have been published in journals and newspapers. He was co– director of the literary journal Ελί–τροχος during the ’90s. He is a member of the Greek Society of Writers and the Poets’ Circle. He founded and is the administrator of the cultural action “Grafeíon Poiíseos”.