Memory of Embers: Iraqi Poets on Exile, War and Resistance 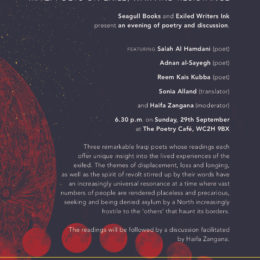 Seagull Books and Exiled Writers Ink present an evening of poetry and discussion that platforms Iraqi voices and delves into themes of exile and memory, war and dictatorship, resistance and return.

This event features readings by Salah Al Hamdani, Adnan al-Sayegh and Reem Kais Kubba, three remarkable Iraqi poets whose readings each offer unique insight into the lived experiences of the exiled. The themes of displacement, loss and longing, as well as the spirit of revolt stirred up by their words are increasingly resonant at a time where vast numbers of people are rendered placeless and precarious, seeking and being denied asylum by a North increasingly hostile to the ‘others’ that haunt its borders.

The readings will be followed by a discussion facilitated by Anba Jawi.

Salah Al Hamdani, French poet, writer and actor/director was born in Baghdad in 1951. He began writing poems at about age 20, as a political prisoner in Iraq. Opponent of Saddam Hussein and inspired Albert Camus, he chose France as a land of exile in 1975, where he continued his opposition to dictators, to war and to terrorism. In Paris, he wrote more than 50 books (poetry, narratives, and short stories) of which several were translated from the Arabic with Isabelle Lagny. As actor or director, he appeared in films as well in theatrical productions, notably in Gilgamesh (1979), directed by Victor Garcia.

Adnan al-Sayegh was born in al-Kufa, Iraq in 1955. His poetry denounces the devastation of wars and the horrors of dictatorship. Adnan has published eleven collections of poetry, including the 550-page Uruk’s Anthem (Beirut 1996). He left his homeland in 1993, lived in Amman and Beirut, then took refuge in Sweden in 1996. Since 2004 he has been living in exile in London. He has received several international awards, and has been invited to read his poems in many festivals across the world. His poetry has been translated into many languages.

Sonia Alland divides her time between New York and southern France. With her anthropologist husband, Alland has collaborated on Crisis and Commitment (1994) and Catalunya: One Nation, Two States (2006). Her translations include Marie Bronsard’s The Hermitage (2001) and Salah Al Hamdani’s Baghdad, Mon Amour (2008) and Baghdad, Adieu (2018).

Haifa Zangana is an Iraqi author and activist. Her books include Women on a Journey: Between Baghdad and London and City of Widows: An Iraqi Woman’s Account of War and Resistance. She edited Party for Thaera, a collection of creative writings by former Palestinian women prisoners. She was an advisor for the UNDP report ‘Towards the Rise of Women in the Arab World’ (2005). As a consultant for ESCWA, she contributed to reports including ‘Towards Justice in the Arab World’, which was banned by UN General Secretary. Her writings are published regularly by Arab and Western media and she is a columnist for Al Quds Al Arabi. She is the editor of Salt Journal, which encourages writing by former women political prisoners in Tunisia, as part of a transitional justice process. 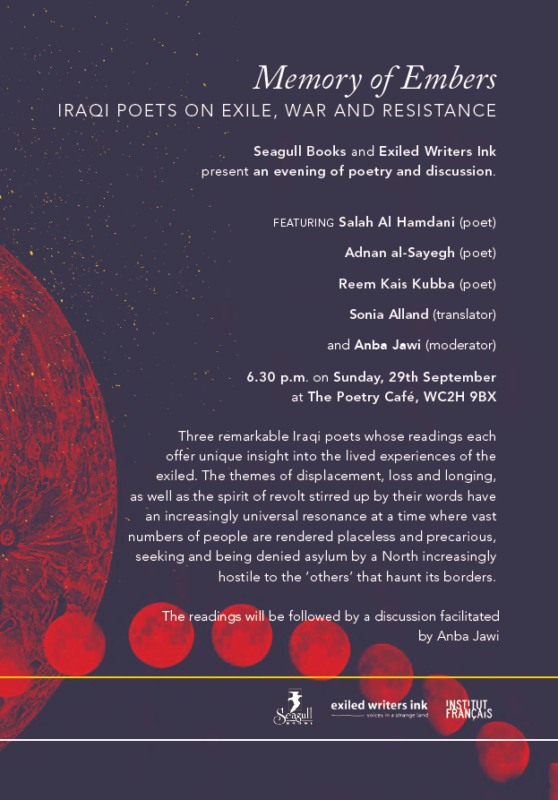