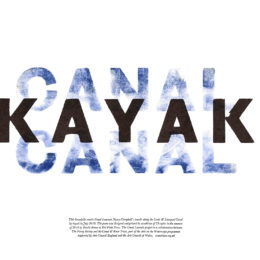 It’s been a year since Canal Laureate Nancy Campbell started her journey up and down England’s waterways. She’s walked, paddled and cycled hundreds of miles along canals and towpaths in search of a poet’s subjects – and written dozens of poems and posts inspired by weather conditions, wildlife, wellness, and the passing of time.

Tonight’s event is both a poetry reading and an exhibition launch. Nancy will read alongside a fellow poet engaged with rivers, canals, and riverside events. Robert Powell has long been energised by waterways. His project A Small Box of River is a collaborative work with artist Jake Attree, inspired by walking along the rivers Ouse and Foss in and near York. It combines, drawings and poems, words and images in a way that leaves space for the reader and viewer to dive in and splash about in search of further riverish meaning.

Nancy’s Laureate poems – exhibited under the title Outlook and Inrush – are all tied to specific locations. Works created from Oxford to Nottingham to London to the Severn build to create a map of the country’s canal network.

Against a backdrop of their joint exhibition Of Water Nancy and Robert will read from their poems and discuss their work – and we will also be screening a couple of filmpoems. Robert’s film The River Speaks is a short made recently with Ben Pugh; and Canal Songs, a new filmpoem made by Falmouth-based filmmaker Chris Morris in response to Jonathan Edwards poem of the same name.

A perfect evening to break the ice on a new year of poetry, we’ll gather at 7pm and the readings will begin at 7.30 and last for about 40 minutes. After that, a chance to mingle, chat and enjoy the exhibition. More details about Nancy’s Canal Laureate work are at www.waterlines.org.uk

Nancy Campbell is the Canal Laureate, a collaboration between The Poetry Society and the Canal & River Trust, part of the national Arts on the Waterways programme. Since 2010 Nancy has undertaken a series of residencies with research institutions in the Arctic and Scandinavia, which has resulted in several projects responding to the environment and water conservation. Her publications include a cultural history of ice, The Library of Ice: Readings in a Cold Climate (2018), Disko Bay (shortlisted for the Forward Prize for Best First Collection 2016 and the Michael Murphy Memorial Prize 2017) and How To Say ‘I Love You’ In Greenlandic (winner of the Birgit Skiöld Award 2013). She is based in Oxford, where she can often be found kayaking on the River Thames. www.nancycampbell.co.uk

Born and raised in Canada, York-based writer Robert Powell has lived for many years in the UK, working in the fields of journalism, photography, the arts and urbanism. He has published four collections of poetry: Harvest of Light, All, and most recently (2018) Riverain (Valley Press) and Aura (AmosLAB, Finland), as well as an artist’s book and exhibition, A Small Box of River (2016) with artist Jake Attree. In 2017 he wrote and co-produced, with Ben Pugh, The River Speaks, a film funded by the Canal & River Trust ‘Arts on the Waterways’ programme. He has recently been artist in residence with the Kone Foundation in Finland. Robert’s poem ‘The Telling’ won a commendation in the National Poetry Competition 2017. www.rjpowell.org

The featured image is by Nancy Campbell and David Armes.

Please note – this event is now full. To be put on the waiting list for tickets, email [email protected]