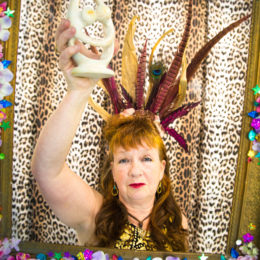 Advantages of Age – a social enterprise that promotes positive ageing co-founded by Rose Rouse, one of the poets – presents six poets who are over-50 in all their wildness, vitality and seriousness. Our ages range from 51 to 81. The first half of the evening will comprise poet Rose Rouse who has a pamphlet out called Tantric Goddess will be reading a mixture of poems about dementia, her mother, and sexuality as we get older. Matthew Brown whose poems have appeared in Magma, Another Magazine and The Group’s Pamphlet, Sounds of the Front Door will be reading some of his sensitively written, moving poems sometimes about birds, and at others about compost. The first half will end with performance poet Caroline Cadenza reading a selection from her outré first collection Metaphorplay, which she describes as ‘a wildly poetic romance’. After the break, the incredible award-winning poet, Wendy Klein – her most recent collection is Mood Indigo – will lead the way with her daring, often witty and vivid poems. Secondly, Beatrice Garland – who won the National Poetry Prize in 2001 and whose most recent collection is The Drum – will treat us to some of her dramatic, often incisive readings. Finally, performance poet Debra Watson – she’s about to publish a chapbook Laments and Incantations – will lure us in with her sensual invocations and naughtiness.