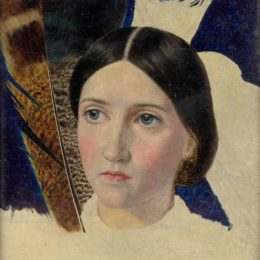 In association with The Poetry Society, Tamar Yoseloff leads a workshop seeking inspiration from Rossetti. Bring along a poem in progress for workshopping in the morning session, then spend  the afternoon drafting new poems springing from the exhibition.

The workshop fee includes a ticket to the exhibition.

Please book via the Watts Gallery.

Presenting portraits of the poet and highlights of the many visual images inspired by her words – alongside Rossetti’s own intriguing and virtually unknown drawings – this exhibition will consider Christina Rossetti’s complex attitude to visual art, recognising the enduring appeal of Rossetti’s verse to visual artists from the 1850s through to the present day.

Christina Rossetti (1830–1894) is among the greatest of English Victorian poets. Born in London to an intellectually minded Anglo-Italian family, Rossetti was the youngest of four supremely talented children, all of whom succeeded as artists and writers.

A precocious and deeply creative child, Rossetti had her own first book of poetry privately printed by her grandfather when she was just 16 years old. The luminous early portraits of the poet that will feature in this show, created by her Pre-Raphaelite artist-brother Dante Gabriel Rossetti, highlight the exceptionally visual and creative family environment in which she grew up. Rossetti studied art herself, attending the North London Drawing School in the early 1850s. Her own charming and rarely seen animal drawings will feature in the exhibition, as will Sing-Song, her collection of nursery rhymes for children which are by turns humorous and touching.

Christina Rossetti spent her early adulthood surrounded by, and modelling for, key figures of the Pre-Raphaelite Brotherhood. She also made her own original contributions to the movement by writing poetry for their journal The Germ. Exploring the ways in which Christina and Dante Gabriel creatively collaborated, the exhibition will feature his illustrations for Goblin Market (1862 and 1865) and The Prince’s Progress (1866).

While ostensibly reclusive, Rossetti was very well connected in the British art world, and cared deeply about how her poetry was illustrated, as it was regularly from the 1850s onwards. The exhibition will include lively illustrations to her poetry by Arthur Hughes and Frederick Sandys.

From the 1860s, paintings inspired by Rossetti’s poems, such as Arthur Hughes’s The Mower (1865), began to appear at London exhibitions, offering freer interpretations of Rossetti’s words than were usually possible with printed illustrations. The celebrated pioneer of art photography, Julia Margaret Cameron, based her composition The Minstrel Group on a poem. Sometimes the results alarmed Rossetti, but these reinterpretations set a trend for artists to reimagine her works in pencil and paint that continues to this day.

The intensity of Rossetti’s vision, her colloquial style and the lyrical quality of her verse continued to speak powerfully after the poet’s death in 1894, and as this exhibition will show, Rossetti’s striking imagery has continued to inspire visual artists.

This exhibition is co-curated by Dr Susan Owens, an art historian and writer, and former curator of paintings at the V&A.