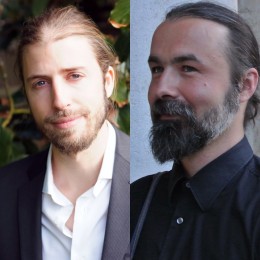 Luke Fischer’s poems startle me to wake again, to wake not only to the thriving details of the worlds surrounding us but to the power of language to reveal the music simmering and alive in every moment.
– Pattiann Rogers

A life’s work comes together here, brick slotted to brick, all cohering. From early to late this is poetry that has the courage, artistic as well as moral, to see things exactly as they are. – J.M. Coetzee

Jakob Ziguras is a poet who is drawn to classical forms and eternal questions. However, in his poems there is no lack of dynamism of imagination and thought, or of contact with what is modern and contemporary. This is a very promising debut. – Adam Zagajewski

Luke Fischer, an award-winning poet and scholar, is the author of the poetry collection Paths of Flight (Black Pepper, 2013), the monograph The Poet as Phenomenologist: Rilke and the New Poems (Bloomsbury, 2015), and the children’s book The Blue Forest (Lindisfarne Books, 2015). He is an honorary associate in the philosophy department at the University of Sydney. For more information see: www.lukefischerauthor.com

Douglas Reid Skinner was born in Upington, South Africa. His work has appeared in South Africa, Italy, France, the USA and the UK. He has published six collections of poems, most recently Heaven: New and Selected Poems (Left Field Poetry). He has translated from Hebrew, Afrikaans, Italian and French: most recently 24 Poems by Marco Fazzini (from Italian), and The Secret Ambition (together with M Fazzini, from the Italian of Valerio Magrelli). Together with Marco Fazzini, he was awarded joint-First Prize in the 1995 British Comparative Literature Association, Open Translation Prize. He directed The Carrefour Press from 1988 to 1992, was editor of New Contrast and the SA Literary Review, and is co-editor of the Cape Town-based poetry quarterly, Stanzas. He lives on the edge of London.

Jakob Ziguras was born in Poland, in 1977, but has lived in Australia since childhood. His debut poetry collection, Chains of Snow (Pitt Street Poetry, 2013) was shortlisted for the Prime Minister’s Literary Awards. His work has appeared in many leading Australian journals and won or been shortlisted for a number of awards. His second book, The Sepia Carousel, is forthcoming with Pitt Street Poetry in mid 2016. He is currently living in Poland and translating various Polish poets, including Stanislaw Baranczak and Aleksander Wat. For more information see:  http://pittstreetpoetry.com/jakob-ziguras/