Each imagined pinnacle: new poems inspired by sculpture at the British Museum 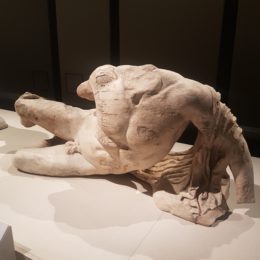 We’re delighted to be working alongside The British Museum on a series of new commissions inspired by its exhibition Rodin and the Art of Ancient Greece (running 26 April – 29 July 2018, #rodinexhibition). Keith Jarrett, Laura Scott and Richard Scott have been regular visitors to the exhibition in search of ideas, textures and histories for their new poems.

On 29 June, they debut these new poems as part of an evening of classic poetry inspired by statues from the ancient world.

From John Keats’ poem inspired by the Parthenon sculptures to Daljit Nagra’s 2017 collection British Museum, the sculpture collection has long been a subject of inspiration to poets. This evening will explore the themes and ideas suggested by these works and the exhibition Rodin and the art of ancient Greece.

Keith Jarrett is a performance poet and fiction writer. He has written for various publications, including The Mechanics’ Institute Review 5, Tell Tales Vol. IV, Pulp Net and, most recently, Boys and Girls. He has written poetry in both English and Spanish. He’s a former London and UK Poetry Slam! Champion and his collection Selah was published by Burning Eye Books.

Laura Scott is the winner of The Geoffrey Dearmer Prize 2015, awarded by The Poetry Society and The Poetry Review. Her poems have been widely published in magazines including The Poetry Review, Edinburgh Review, Magma, Rialto, Tate Etc and Envoi. Her pamphlet, What I Saw (Rialto, 2013), won the 2014 Michael Marks Award for a poetry pamphlet. She teaches at the University of East Anglia.

Richard Scott was born in London in 1981. His poems have appeared widely in magazines and anthologies including Poetry Review, Poetry London and Swimmers. He has been a winner of the Wasafiri New Writing Prize, a Jerwood/Arvon Poetry Mentee and a member of the Aldeburgh 8. His pamphlet Wound, published by Rialto, won the Michael Marks Poetry Award 2016. His debut collection Soho was published by Faber & Faber in 2018.

UPDATE: Our friends and neighbours at the Museum have kindly donated 5 pairs of tickets to the event to friends and followers of The Poetry Society. If you’d like a pair (or a single ticket), email Bryony Smith ([email protected]) by noon on Friday. In a heatwave, there’s no place better to be than a museum full of cool marble!