“When I ask you to listen”: Peter Kahn, Malika Booker and Nick Makoha 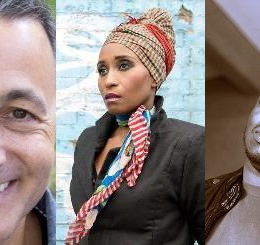 The Poetry Society is delighted to present a special reading celebrating legendary writers’ collective Malika’s Kitchen, featuring visiting Chicago-based poet Peter Kahn, who was recently commended in the 2017 National Poetry Competition with the poem ‘Till It’s Gone‘, a ‘Golden Shovel’ poem after Joni Mitchell.  Peter is the founder of Malika’s Kitchen’s Chicago branch.

Peter will be joined by Malika Booker herself, heralded as “a pioneer of the spoken word movement in the UK” as well as poet and playwright Nick Makoha, another member of Malika’s Kitchen, and whose recent collection Kingdom of Gravity was lauded by Terence Hayes as an “amazing debut”.

Doors will open at 7pm with poetry starting at 730pm.

Peter Kahn is a founding member of Malika’s Kitchen and co-founder of the London Teenage Poetry Slam. He has been a high school teacher at Oak Park/River Forest High School in Chicago since 1994 and has recently also taught at Roosevelt University.  As a Visiting Fellow at Goldsmiths-University of London, he founded the Spoken Word Education Training Programme. Peter holds an MA in English Education from The Ohio State University and an MFA in Creative Writing from Fairfield University.  Along with Patricia Smith and Ravi Shankar, Peter edited The Golden Shovel Anthology:  New Poems Honoring Gwendolyn Brooks.

Malika Booker is a writer, spoken word and multidisciplinary artist, whose work spans literature, education and cross-arts.  Organisations she has worked with include Arts Council England, BBC, British Council, Wellcome Trust, National Theatre, Arvon, and Hampton Court Palace.  She co-founded and ran Malika’s Kitchen, a writers’ collective based in London and Chicago.  Her latest poetry collection is Pepper Seed, published by Peepal Tree Press in 2013. She was the inaugural poet-in-residence at the Royal Shakespeare Company.  In 2017 her poem ‘Nine Nights’, originally published in The Poetry Review, was shortlisted for the Forward Prize for Best Single Poem.

Nick Makoha has been shortlisted for the 2017 Felix Dennis Prize for Best First Collection for his debut Kingdom of Gravity.  He is a Cave Canem Graduate Fellow and Complete Works Alumni. He won the 2015 Brunel International African Poetry prize and is the 2016 winner of the Toi Derricotte & Cornelius Eady Chapbook Prize for his pamphlet Resurrection Man. His poems appeared in The New York Times, Poetry Review, Rialto, Poetry London, Triquarterly Review, Boston Review, Callaloo, and Wasafiri. He is a Creative Entrepreneur-in-Residence at Goldsmiths  working to create an in depth online digital archive of the Metic experiences of Black British Writers.  Find him at www.nickmakoha.com