A book of collected poems, posthumous or otherwise, radiates a poet’s work against a total horizon, occupying a larger symbolic space than the individual collections. If the ‘collected’ suggests a solar, monumental completeness, a ‘selected’ seems a lunar counterpart – less definable, more like images reflected from a larger body, and by its selective nature, counter-definitive. Gunn edited seven selections of other poets, most notably Fulke Greville, Ben Johnson, Ezra Pound, and Yvor Winters – all of whom influenced him deeply. He also compiled three Faber selecteds from his own work; the most iconic, in 1962, co-starred Ted Hughes – a book touched by the 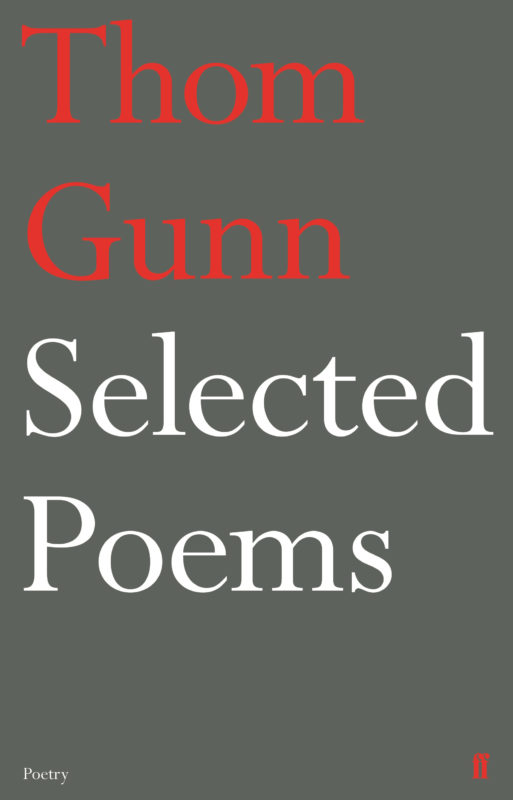 hands of many A-level students. All three appeared before his Collected Poems in 1994, his last book Boss Cupid in 2000, and his sudden death in 2004. Posthumous selected poems, often done by a fellow poet or admirer, are an important and difficult genre. If death provides finality to a poet’s career, it also enables new kinds of visibility and freedom of interpretation. In this vein came August Kleinzahler’s Selected Poems of Thom Gunn (2009) published by FSG in the US, showcasing a formally stylish and eclectic Gunn. Clive Wilmer’s informative and carefully annotated book is more interested in representing the arc of Gunn’s career as it relates to his life, framing his work through illuminating biographical material largely culled from the Bancroft Library Archive at Berkeley where Gunn taught over four decades.

Biography, interestingly, has sat awkwardly with Gunn throughout his career. In a rare autobiographical piece, ‘My Life Up to Now’, from his selected essays, The Occasions of Poetry (1982), Gunn wrote that “the danger of biography, and equally of autobiography, is that it can muddy poetry by confusing it with its sources”. ‘The Gas-poker’, a harrowing poem about his mother’s suicide and one of the finest elegies of the last century, was published in his last book in 2000. Wilmer’s Selected includes the detailed account Gunn wrote in his diary after her death in 1944, when he was fifteen. Written in the third person, the poem’s emotional intensity is suppressed by Gunn’s diffident quietness, translating traumatic experiences into something strangely distanced from the self: “They who had been her treasures / Knew to turn off the gas, / Take the appropriate measures, / Telephone the police.”

This reminds us that throughout his career, Gunn wrote against the grain of Confessional poetry. It is as though his poetry depended on him treating himself as someone else, or nobody in particular, someone almost anonymous. Gunn never claimed the Orphic privileges of the ‘Poet’ or a ‘Poet’s Life’ like Robert Lowell or Sylvia Plath. He was content to operate within the republic of contingency. Wilmer’s edition juxtaposes Gunn’s poems with these often revealing biographical materials, providing interesting backdrops for Gunn’s distancing act.

Wilmer’s selection also gives us glimpses of the early Gunn thriving through poses and disguises in Fighting Terms (1954) and The Sense of Movement (1957), while their cool, sexually coded, and existentialist energies were transformed into a more varied, contradictory, and freer voice in My Sad Captains (1961), which reads in many ways like a farewell to his earlier iconographic repertoire. His next book Touch (1967) seems a not-quite-achieved prelude to the shape of things to come, groping towards a new idiom born of his encounters with LSD and sexual liberation on the one hand and American verse post William Carlos Williams on the other. Even after his chronicles of gay liberation, Beat culture and hallucinogenic experiments in coming-out books like Moly (1971), Gunn appears to have been strangely disenchanted by his own cult of hedonism, as when one of Circe’s drugged pigs exclaims in ‘Moly’: “Oh a man’s flesh already is in mine. / Hand and foot poised for risk. Buried in swine.”

Gunn’s poetry of sexual and imaginative liberation was succeeded by saddened reflections on the vanity as well as the beauty of human wishes. The nightmarish scenarios of Jack Straw’s Castle (1976) and urban openness in The Passages of Joy (1982) give way not only to the beautifully freighted elegies of The Man with Night Sweats (1992) but also the disillusioned lyrics from the domain of Boss Cupid (2000). Wilmer’s edition provides enlightening glimpses of Gunn’s half-century career across both sides of the Atlantic, which coincided with increasing tensions within the poetry establishment about the importance of tradition versus individual talent (as ironically captured in ‘Expression’ when Gunn speaks of the “very poetic poetry” of his juniors), as well as ferocious conflict over identity politics, fought out in terms of race, gender, and sexuality, particularly in the US.

Critics recognised Gunn’s seemingly effortless technical elegance, particularly his medium-like ability to resuscitate the style of the high formalist poets of Elizabethan and Jacobean England in his records of gay bars, drugs, AIDS, rock and roll, casual sex, and alternative forms of sociability associated with post-1960s California. Rhythmic control is at the heart of Gunn’s poetic imagination, and it is important to remember that the measured experiments of stunning syllabic poems like ‘Considering the Snail’ enabled him to write mesmerising unfolding free verse in ‘Touch’ and ‘The Artist as an Old Man’. Gunn’s formal intelligence returns in The Man with Night Sweats, which contains some of the most moving English-language poems of the last century. “Your dying is a difficult enterprise”, Gunn begins his equally difficult ‘Lament’, a poem that gives primacy to a friend dying of AIDS. Told from a first-person perspective, the tightly knitted stanza addresses the second person (the sufferer and “your death”), before moving onto the third person (the comforter and “a friend”). This subtle flow of pronouns constructs an intricate, private web of human connectedness in mourning. Gunn was writing at a time when AIDS elegies proliferated on all fronts, but he turns away from the ceremonies of public mourning and protest typical of the genre, with its hypnotic insistence on consolation. In elegy after elegy, his simple and controlled language refuses large-gestured self-dramatisation, touching instead on the tacit anguish of both the sufferers and witnesses, bringing the whole weight of his sceptical, formal intelligence to bear on the AIDS crisis in San Francisco.

Auden speaks of poetry as “memorable speech”, and here is some of Gunn’s: “One is always nearer by not keeping still” (‘On the Move’); “Resisting, by embracing, nothingness” (‘In Santa Maria del Popolo’); “the sniff of the real, that’s / what I’d want to get” (‘Autobiography’); “I like loud music, bars and boisterous men” (‘Transients and Residents’); “My flesh was its own shield: / Where it was gashed, it healed” (‘The Man with Night Sweats’); “he fell […] ‘Into the strong arms of Thom Gunn’” (‘Duncan’), and “The intellect as powerhouse of love” (‘A Wood near Athens’). The numerous memorable phrases in Gunn’s poems reveal a poet of masterful contradictions, balancing the personal and the persona, intimacy and promiscuity, vulnerability and defensiveness, risk and trust, love and intellect. Whether or not one agrees with the sentiment, Gunn’s assertion of “The intellect as powerhouse of love” demonstrates his continued fidelity to the inspiration of John Donne and the metaphysical poets with whom he identified from the start of his oeuvre, and also to the homoerotic Shakespeare, whose sonnet ‘They that have power to hurt and will do none’ echoes through ‘A Wood near Athens’. Wilmer’s edition shows us that Gunn at the end of his career is as traditional a poet (in terms of cadence, stanza, line and form) as at the beginning, but that he has forced traditional poetic forms to respond to contemporary conditions and modern occasions, with an intellectual suppleness and emotional candour that is almost unprecedented, even taking into consideration more overtly experimental poets like Allen Ginsberg or Frank O’Hara. Arguably, this new selection could have given more space to the poems than the notes. Nevertheless, the selection weaves together highlights from Gunn’s astonishing career, reminding us that in refusing many of our confident labels about styles and movements and resisting the poetics and politics of ‘identity’, Gunn has left us a memorable body of work unparalleled among his contemporaries. 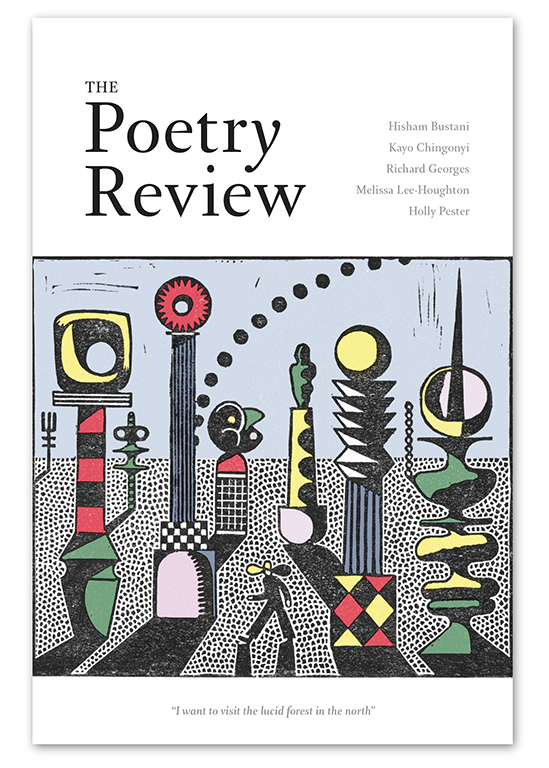 Kit Fan’s second collection, As Slow as Possible, is forthcoming from Arc in 2018. This review was first published in The Poetry Review, 107:4, Winter 2017. © The Poetry Review and the author.