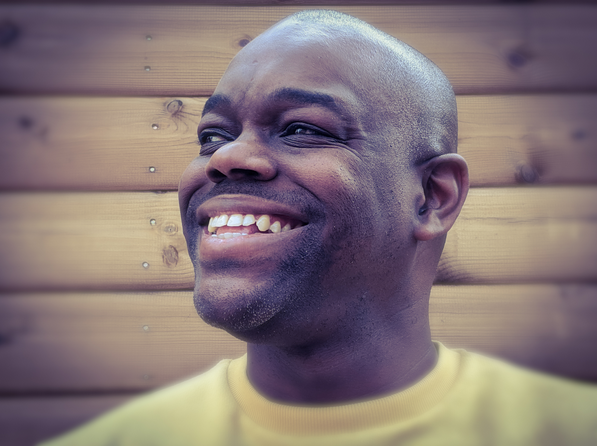 Mike Sims, editor of The Poetry Society’s quarterly Poetry News, speaks to Marvin Thompson, who won the National Poetry Competition with his poem ‘The Fruit of the Spirit is Love (Galatians 5:22)’

Mike Sims Marvin, I’m in awe of your rich, angry, anguished and allusive poem. It connects to so much outside itself: Dante, the Bible, music, film and TV. There are different time-zones, too; the effect is rather like jump-cuts, as you switch from one to another.

Marvin Thompson As a teen, I had two or three important friends. However, I spent much of my time in my own company and my own thoughts. The past, present and future often coexisted in my mind as I explored different ideas, which helped me develop this ‘jump-cut’ writing effect. With this approach, I have been able to collapse a decades-long timeline into the nineteen lines of my villanelle.

In terms of allusions in my poem, music is where it all starts. I spent the summer of 2020 writing bad villanelles, fighting against the form’s music. This is one of the first poems where I gave in to the form. It’s not a traditional villanelle. However, by employing repetition, rhyme and iambic pentameter lines, I’ve composed a poem with the music of a traditional villanelle.

The iambic pentameter, for me, is a poetic form that is synonymous with Shakespeare and the celebrated lineage of British literature and history. By writing my poem in iambic pentameters, I am claiming my part in that British tradition. My parents were born in Jamaica. They were born British into the British Empire. The native Arawaks of Jamaica did not ask for their land to be stolen or their people murdered. My African ancestors did not ask to be torn from their homelands. As such, my use of iambic pentameters alludes to the fact that British history and Black British history are one and the same.

The song I most wanted to incorporate in my poem was ‘Strange Fruit’, as sung by Billie Holiday and Nina Simone. The song evokes the horror of lynching, a tradition linked directly to minstrelsy. In both traditions, Black people are treated as less than human, fit only for mirth or death.

Mike Sims It seems to me that the message of the poem is in its beautiful title. Do biblical language and stories find their way naturally into your work?

Marvin Thompson My Christian faith pervades everything I do, including the writing of poems. I have a memory of my children being taught the “fruit of the Spirit” Bible verses in Sunday school. This happy memory and my desire to allude to the song ‘Strange Fruit’ led me to the title.

Mike Sims You’ve said how this poem is for your family; it is wonderfully tender about family relationships.

Marvin Thompson During the composition of my debut collection, Road Trip (Peepal Tree, 2020), I felt the need to make my poems more relatable. I decided to write about family life and my experiences of parenthood. In my poems, I now explore my Black British upbringing, incorporating Spike Lee, Jason Lee and other heroes. I have also enjoyed writing about the complexities of parenting Dual Heritage children in a country where people of colour are not always treated as though they belong.

Mike Sims The song ‘Blood of the Lamb’ seems central to your poem.

Marvin Thompson Rhyming “woodland” with “Blood of the Lamb” came late on in the composition. The lyric is from the hymn ‘Are You Washed in the Blood?’, written by Elisha Hoffman in 1878. Being washed in the blood of the lamb is a metaphor for being spiritually cleansed by Jesus. However, in a more secular context, the lyrics are macabre. This is apt. The historical reality of blackface, lynchings and colonialism, and their aftermath, is pure horror.

Mike Sims I love your use of the evocative Welsh word “cwtch” in this poem. What does Wales and its culture mean to you?

Marvin Thompson I moved to Wales in 2010. This nation is now the homeland of my Dual Heritage children and stepchildren, and so I have a stake in helping Welsh literary culture to become even more inclusive, celebrating diversity in all its forms. I’m eager to translate my poems into Cymraeg (Welsh). So far, Grug Muse and clare e. potter have made translations of my work, spreading my ideas across Wales.

Mike Sims Finally, the plum one: why do you write poetry?

Marvin Thompson Initially, it was my need for self-expression. I tried to write rap lyrics as a child. I was no good; I turned to poetry. It has taken a twenty-four-year apprenticeship to get where I am now.

Read Marvin Thompson’s ‘The Fruit of the Spirit is Love (Galatians 5:22)’, alongside other NPC-related content and resources, at poetrysociety.org.uk/npc

Find out more about Poetry News on The Poetry Society publications webpage.