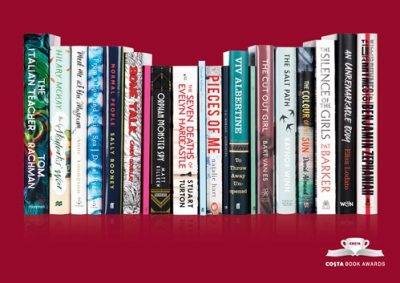 Congratulations to the four poets on the shortlist for the 2018 Costa Poetry Award.

In 2011, Zaffar Kunial won third prize in the National Poetry Competition  with ‘Hill Speak’. With Steve Ely, Denise Riley and Warsan Shire, he contributed to The Pity, a series of new poems commissioned and published by the Poetry Society as a response to the centenary of the First World War. The Pity commissions were premiered live at Purcell Room, Southbank Centre, on 2 October, National Poetry Day, 2014, accompanied by background visuals by Robert Peake. The poems are now available as a book, available from The Poetry Society online shop.

Richard Scott’s poetry has been published twice in The Poetry Review.

The Costa Book Awards honour some of the most outstanding books of the year written by authors based in the UK and Ireland. There are five categories – First Novel, Novel, Biography, Poetry and Children’s Book – with one of the five winners chosen as Book of the Year, announced at an awards ceremony in London every January.

Launched in 1971 as the Whitbread Literary Awards, they became the Whitbread Book Awards in 1985, with Costa taking over in 2006.