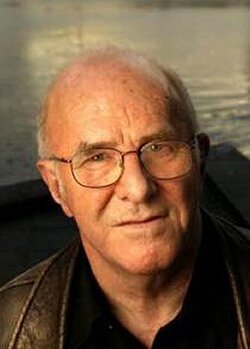 Clive James, who was probably best known for the stringency and unrivalled wit of his television criticism, was also a poet, novelist, translator, reviewer, memoirist and musician. Born in Kogorah, Australia, in 1939, James was first part of Sydney’s intellectual set; having swapped hemispheres, he soon found his place in literary London, after a stint at Cambridge University, where he was president of the Footlights. He married his critical and comedic skills in the many television shows he presented and in his writings about pop culture, but he was also a lover of poetry and literature, famously learning Russian so he could appreciate Pushkin in the original language.

Clive James was a long-term collaborator for over fifty years with British singer-songwriter Pete Atkin, the two having first met as students at Cambridge University. They formed an instant rapport, and working together produced over two hundred songs; their collaboration was celebrated by a performance by Pete Atkin of Clive James’s lyrics at The Poetry Café on National Poetry Day in 2018.

In 2010, James was diagnosed with emphysema and kidney failure, and with leukaemia in 2011; he responded with a rich flowering of writing, including volumes of poetry, reviews, columns, a translation of Dante’s Divine Comedy and the much-shared valedictory poem ‘Japanese Maple’.