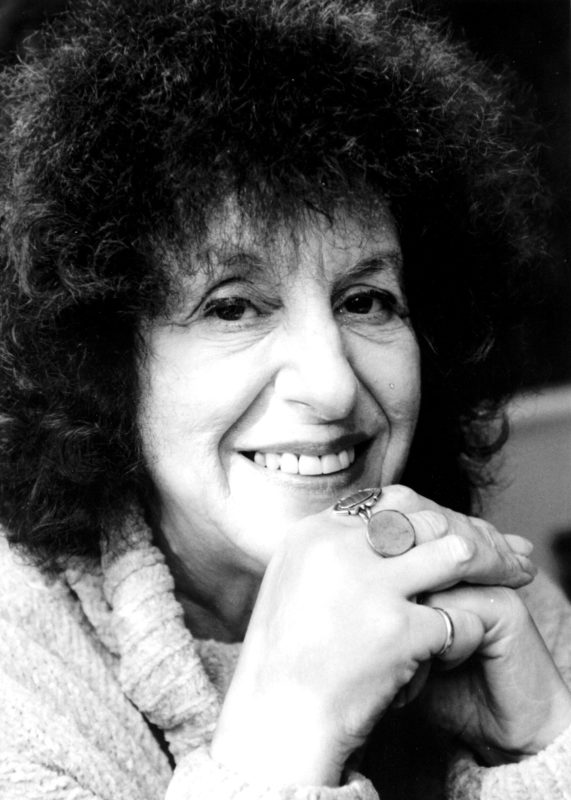 Elaine Feinstein, who died on 23 September 2019, was an award-winning poet, novelist, biographer, a witty conversationalist and a spellbinding performer.

Born Elaine Cooklin in Liverpool on 24 October 1930, she grew up in Leicester and read English at Newnham College, Cambridge. She subsequently read for the bar in London, but subsequently returned to Cambridge with her husband, the molecular biologist Arnold Feinstein. They and their three sons lived in the centre of Cambridge for more than a quarter of century and writers from across the world including Yevgeny Yevtushenko, Miroslav Holub, Allen Ginsberg and Yehuda Amichai visited them there. She worked at Hockerill Training College in Bishops Stortford, and then as a university lecturer at the University of Essex.

Elaine Feinstein was the author of over thirty books, including fiction and biography. Her acclaimed memoir, It Goes With The Territory: Memoirs of a Poet (Alma) was published in 2013. Her reviews and essays appeared regularly in The Poetry Review and elsewhere; she also wrote for radio and television. She received many prizes, including a Cholmondeley Award for Poetry, Society of Authors’, Wingate and Arts Council Awards, the Daisy Miller Prize for her experimental novel The Circle (longlisted for the ‘lost’ Man Booker prize in 2010), and an Honorary D.Litt. from the University of Leicester. Her books were widely translated and she herself was a noted translator – of the Russian poet Marina Tsvetaeva in particular. She also wrote insightful biographies of Tsvetaeva, Ted Hughes, Anna Akhmatova and others. Elaine Feinstein served on the Council of the Royal Society of Literature, of which she was a Fellow, as a judge of innumerable literary prizes, including the National Poetry Competition in 2004, and as Chair of the Judges for the T.S. Eliot Prize in 1995. She received a Civil List Pension in 2010.

As a poet, Feinstein began writing under the influence of Ezra Pound, William Carlos Williams, the Objectivists and Black Mountain poets. Alive to her family origins in the Russian-Jewish diaspora, she developed a close affinity with the Russian poets of this and the last century. Her poems, which appeared regularly in The Poetry Review, were witty, searching, sometimes sardonic, sometimes flamboyant. They exuded the lifeforce that made her such an expressive and inspiring reader. Her Collected Poems and Translations (2002) was a Poetry Book Society Special Commendation. Her book, The Clinic Memory: New and Selected Poems, was published by Carcanet in 2017.