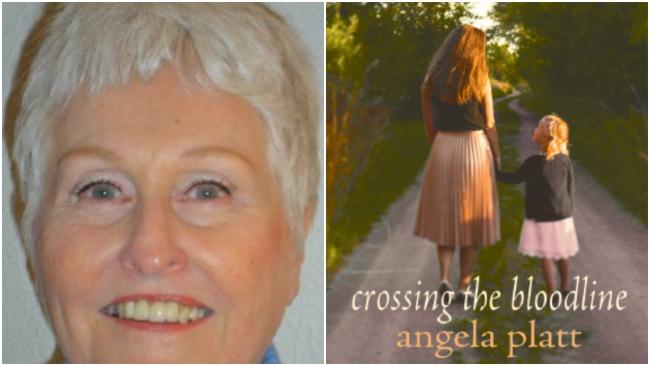 Warm tributes have been paid to Angela Platt, who died on 8 May. Angela was The Poetry Society Stanza Rep for Newport and and had been a Poetry Society Member for many years. Born in Cardiff, Angela attended school in Newport, then worked at the Inland Revenue in Cardiff and Llanishen before a teaching career in Lincolnshire. On returning to Newport, she had been a figure in the local poetry community for many years. She ran a creative writing class at Cwtsh and would regularly appear at open mic events.

In summer 2019 Angela’s poem ‘Moonshine’ was published in Poetry News in response to our competition judged by Kit Fan. Read ‘Moonshine’ here or in the Members’ Area. Kit said of ‘Moonshine’:

“The speaker’s sharp-eyed observations take us through the divide between nature and the human with an acrobatic control that is supple and funny.”

Angela’s debut collection crossing the bloodline was originally set for release in June through Cinnamon Press but has been released early through the publishers after Angela was diagnosed with terminal pancreatic cancer. Available here.

Jonathan Davies said of the collection:

“ In the powerful, often joyous poems of crossing the bloodline, Angela Platt writes movingly of subjects like family and memories… It’s a magic thing, the way that words can conjure the past and people to stand here right before us, and so wonderful to find a poet who can make this happen.”

“We’ve recently launched a new imprint and have a crop of wonderful writers we’re working with in collaboration with Rowan Tree Editing. Among the poets, Angela Platt’s crossing the bloodline was one we were impressed by and keen to publish. Angela previously mentored with us and we knew she’d be delightful to work with.

We initially had a timeline of early autumn for the publication, but the day lockdown began I had a conversation with Angela about moving the date forward. With grace and calm she explained that she had a terminal diagnosis and would love to see the book finished.

With the help of our wonderful new printers and Angela’s determination, supported by friends and family, the book was edited, designed and in our hands five weeks later.

Angela was thrilled, telling me it was a dream come true, and the orders rolled in immediately.

On Saturday, Angela’s husband let us know that she had died on Friday 8 May, with her daughter and a nurse at her side. He will go on promoting the book, which meant so much to her.

It was a privilege to work with Angela and we send our love and condolences to her family and friends. She was someone who helped many other poets find their voices, teaching community-based creative writing courses and it’s fitting that she leaves crossing the bloodline, a lyrical and affectionate look at coming of age, as one of the many memories people will treasure of her.”

“Angela was one of the most warm-hearted people I have ever met. Her generosity of spirit and enthusiasm for poetry would light up the room at our meetings. I learnt so much from her thoughtful critique of my writing. She was an inspiring mentor and friend, always gentle, patient and kind. Most of all, I will miss her dazzling smile and twinkling eyes.”

“Angela started the Newport Stanza in 2016. Since then it has become a small but thriving community of poets, many of whom have achieved publication and competition success. We were devastated to  learn, in early March, that Angela had received a diagnosis of terminal cancer. She handed over the running of the Stanza to Adele Cordner and we are continuing to meet monthly, though online rather than in person until the current crisis lifts. We shall keep the group going in memory of our friend.

Angela was involved in poetry for most of her life, generously sharing her love of it with several groups and always ready to give support to, and to learn from, others. A great many people will miss her deeply.

Initially wary of commitment to a group, I knocked on Angela’s door, poised to run away. Her honest welcome, her unmistakable joy in poetry and her understated flair for seamless organisation made me look forward to Stanza meetings in her happy house. Her bravery in the face of constant pain and the shock of the final diagnosis was truly remarkable. Goodbye, Angela. I am richer for having known you and, like all “your” poets, poorer for your going.”

“I have fond memories of discussing poems around the table at Angela’s. She was a kind and welcoming host, creating the right atmosphere for enjoyable and constructive discussions. Her wealth of knowledge and experience from a life lived to the full came across in conversations and her wonderful poems.”

“Angela was the first to welcome me into the Stanza group which she kindly hosted at her home in Newport. Always supportive in her feedback on my poems, no matter how amateurish they might have appeared to her more experienced eye, she would always find something encouraging to say. She was a brave heart and I miss her.”

“I was invited to join the Newport Stanza group generously hosted by Angela three years ago and found it to be a wonderfully supportive and encouraging place to workshop my poetry. Angela organised the meetings with great efficiency and gentle prompting to keep us focused. She was most generous and positive in her responses to our presented poems while still managing to identify any weaknesses and make helpful suggestions. Her poetry is a legacy to her warmth and humanity and I’m very much looking forward to reading her full collection.”

“I met Angela last year when I joined the Stanza group, and found her to be unfailingly welcoming, calm and gracious. She encouraged me with her positive comments, and managed the group with such care and efficiency. I am so glad that she saw the publication of crossing the bloodline and I’m sure the poetry will give comfort to her friends and family in the times to come.”

“I like to think of her as the the dedicated poet who opened up the chance for me to talk and share poetry. She kept us all informed and was always welcoming, helpful, patient and encouraging. She allowed me, and I am sure others, to become a better writer. I think this is the best way that I can remember her and I will try to fill the hole she left with her collection, but will be unable to.”

“I had started writing poetry as a form of therapy and as an expansion of my journaling in March 2019. When I returned home from Australia I felt I would love to explore my use of poetry further and I started looking for a group. I luckily found the Newport Stanza group. As a newbie, I was welcomed in by Angela and I couldn’t have wished for a better introduction to the world of poetry. I will always be thankful for all of her feedback and words of encouragement. Angela’s warmth, grace and legacy will live on in her work.”

“I only knew Angela for a short time but she made a great impact on my life, welcoming me into her home, encouraging me with my poetry and sharing her own heartfelt and powerful writing. I remember one, beautifully articulated, poem about a parachute jump she once took, soaring like a bird over the patchwork fields below. I imagine her there now.”