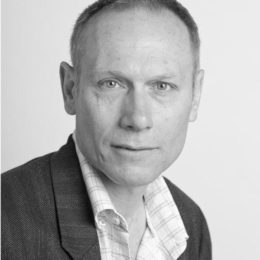 In advance of his reading at the ‘In Town Tonight’ event on Friday 22nd March at The Poetry Café with Phillis Levin, Ben Rogers at The Poetry Society spoke to the poet Mark Ford

You lived in Kenya until the age of four and the process of writing the poem ‘After Africa’, about your move from Kenya to Surbiton, caused you not to sleep for days.  Can you tell us about the challenges in writing that poem?

‘After Africa’ is a pantoum – the second and fourth lines of each four line stanza become the first and third of the next, so getting it to work syntactically is quite tricky, although in many ways I find poems in very set forms, like pantoums or sestinas, easier to write than ones which have no scaffolding or requirements to fulfil. I am a bit of an insomniac so it was possibly just a series of nuits blanches that coincided with my writing of that poem – although I also seem to remember that at that time I was reading Cormac McCarthy’s The Road so it may well have been his terrifying vision of the world’s future that prevented me from dropping off.

You have written a biography of Raymond Roussel, Raymond Roussel and the Republic of Dreams as well as translating his last poem Nouvelles Impressions d’Afrique (New Impressions of Africa).  What particularly interests you about Roussel?

And in fact as well as the above my translation of L’allée aux lucioles (The Alley of Fireflies) has just come out this last month from a small publishing house based in Brooklyn called Song Cave. It’s hard to explain the fascination of Roussel’s work to someone who isn’t a fan – at the end of the day I love the stories, which are at once completely implausible and yet as gripping and unpredictable as fairy tales. To some extent making sense of a poem like Nouvelles Impressions is like doing a fantastically hard crossword puzzle, and in a foreign language too! But Roussel is also very funny, and his compulsion to write, and to get his writing as good as possible, is at the end of the day not so very different from that of, say, Proust or Flaubert. There is, though, it must be admitted, something somewhat autistic about his work and I occasionally wonder if he was on the spectrum.

How important to you is the relationship between dreams and creativity?

A couple of dreams have resulted directly in poems – my very first poem ever, ‘A Swimming Pool Full of Peanuts’, written when I was 21, came straight out of a dream, and so did the one in which I imagine Hart Crane is still alive and having a party with lots of Hart Crane lookalikes in his apartment on MacDougal St. in New York. I suppose the big difference is that dreams are spontaneous and incommunicable, and derive from and remain pretty much within the subconscious, while creativity is an ongoing battle with language. You don’t feel a sense of achievement even after a really enjoyable dream, but you do when you finish a poem, particularly if it has taken a long time and has required a lot of effort. Dreams, on the other hand, are effortless, effort-free. I sort of wish poems could be like that, but then where would be the fun in getting them right? And what are the chances of anyone else being interested?

Your poem ‘Early to Bed, Early to Rise’ is full of allusions to films including Out of the Past, 12 Monkeys, Ivan the Terrible, Ugetsu Monogatari, Alphaville and Swingers.  Which of these films (assuming you’ve seen them) do you like best and why?

I have seen them all but a long time ago – apart, that is, from Ivan the Terrible which I started watching but for some reason bailed on – I expect it’s great, at least if you’re an Eisenstein fan. It’s in the poem because of the reference to Moscow (where I’ve never been) and the joke about having to watch both parts twice as a punishment for mixing up Charles and Burl Ives. Out of the Past I remember being pretty good, but Ugetsu Monogatari is a total classic and is certainly the one I would take out of these six on a desert island. Alphaville, between ourselves, I thought a bit overrated.

You once asked John Ashbery “How does a poem begin, and end, for you these days? I mean, is there anything in particular that prompts you to start – or urges you to stop?”  How would you answer these questions?

It’s funny you should quote that particular question from my entretien with JA since as I recall Sandy McClatchy, who edited the series, asked me to add it after we’d recorded the interview, having read through the transcript of our chatter and decided it needed a bit of rigour and direction! Anyway, it’s not a bad question, and as I remember JA answered it very deftly, particularly the bit about stopping, which he said was rather like knowing when to take a soufflé out of the oven. But of course he could get going at the drop of a hat, any time any place, and keep going too, whereas I labour over every comma and line-break… Anyway, to answer it myself, I come up with what seems to me a decent or viable opening line, and after that I feel I have to keep ploughing ahead so as not to waste it, on the “I’ve started so I’ll finish” principle. You wouldn’t guess it, but even 3 or 4 lines only get done after pages of crossings out and false starts in my notebooks – which are gonna be worth a FORTUNE one day! As for endings – well, since there is quite a lot of narrative in my recent poems, they tend to end when the story is done.

In your poem ‘Aloft’, which features in your latest collection Enter, Fleeing, you write: “An airport/ is a delightful retreat for any mind grown weary/ of the struggles of life.” What do you like about airports, and if you could get on a flight anywhere now where would you go?

My father worked for the airlines, first for BOAC and then for British Airways, so airports were a big part of my growing up. He loved them, and when I recall him roaming around Lagos Airport or Chicago’s O’Hare or Kai Tak Airport in Hong Kong, I think of a king in his palace, or a football manager in his stadium. In fact he loved them so much he would always disappear when we were about to catch a flight, having just spotted the Aer Lingus or Swiss Air chap, and wouldn’t reappear until our plane was on the point of leaving – very stressful for the rest of us. Airports still have quite a lot of romance for me, although most these days have vast and dispiriting duty-free outlets – in fact they are a bit like shopping malls with runways attached. But I do still get a thrill out of airports and feel I have airport know-how in my DNA, or coursing through my veins … Anyway, as I’m sure you’ll know, those lines are a version of a Baudelaire prose poem, with airports replacing ports – neat idea, eh? Where would I go? What’s the furtherest you can get from Jacob Rees-Mogg? A remote atoll in the middle of the Pacific…

Exhibition celebration: What the Dickens?

Stanza Bonanza: showcase for poets from Barnes, Chiswick and Clapham