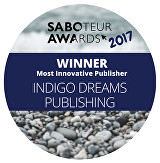 Congratulations! to Poetry Society Members Jenny Mitchell and Carl Griffin, winners of the 2018 Geoff Stevens Memorial Poetry Prize organised by Indigo Dreams Publishing. As a result of their joint win both Jenny and Carl will have new publications coming out later in the year.

The Prize is held annually in memory of Geoff Stevens, whose last Indigo publication, Sleeping With You, was published just one month before he died in 2012.