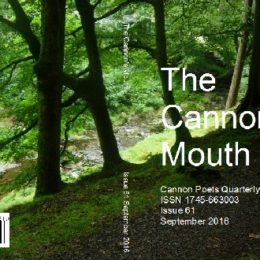 Poets were invited to write a poem or poems of just fourteen lines in length. First prize was £500, second £250 and third price £125.

Cannon Poets have met monthly since 1983 and encourage poetry writing through workshops run by members or visitors; break-out groups where poems are subjected to supportive peer groups scrutiny; ten minute slots where members read a selection of their poems to the whole group and through publication in quarterly journal, The Cannon’s Mouth.