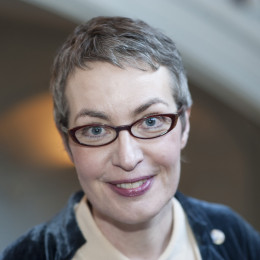 Congratulations to Poetry Society Member Kate Clanchy who has won this year’s Orwell Prize for Some Kids I Taught and What They Taught Me, a book about her experience of teaching in state schools for several decades.

“In this book, a brilliantly honest writer tackles a subject that ties so many people up in knots – education and how it is inexorably dominated by class. Yet this is the very opposite of a worthy lecture: Clanchy’s reflections on teaching and the stories of her students are moving, funny, full of love and offer sparkling insights into modern British society.”

Kate Clanchy is a writer, teacher and journalist. Her poetry collection Slattern won a Forward Prize. Her short story ‘The Not-Dead and the Saved’ won both the 2009 BBC National Short Story Award and the VS Pritchett Memorial Prize. Her novel Meeting the English was shortlisted for the Costa Prize. Her BBC 3 radio programme about her work with students was shortlisted for the Ted Hughes prize. In 2018 she was awarded an MBE for services to literature, and an anthology of her students’ work, England: Poems from a School, was published to great acclaim. In the same year she received a Cholmondeley Award recognising a body of work by a poet.

We are Writing a Poem about Home, a collaborative radio poem by Kate Clanchy who worked with the diverse students from Oxford Spires Academy to create the piece, was shortlisted for the Ted Hughes Award for New Work in Poetry 2015. It was made for National Poetry Day 2015 and broadcast as part of the Between the Ears series of programmes on BBC Radio 3. It was produced by Jonquil Panting. You can listen to the full programme on the BBC iPlayer

The Orwell prizes are awarded by the Orwell Foundation, which exists to perpetuate the achievements of the British writer George Orwell, author of The Road to Wigan Pier, Homage to Catalonia, Animal Farm, and 1984.