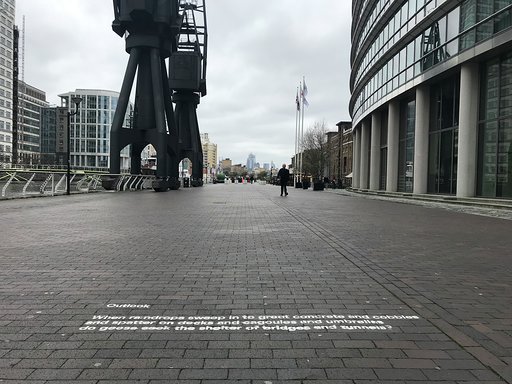 A new poem, ‘Outlook’ by Canal Laureate Nancy Campbell, has now been realised in paint and can be found by the public waterways in West India Quay in London’s Docklands.  The poem called ‘Outlook’ was commissioned by the Canal & River Trust to change perceptions about ‘bad’ weather and encourage people to visit the waterways even when it is raining.

Nancy Campbell said: “There are on average 133 days of rain in the UK each year, and those 133 days of rain mean a lot of opportunities which could be lost by waiting for sunshine. As a kayaker, I found myself in sympathy with the subject of the commission. Getting soaked is an integral part of paddling, and the many birds and animals I’ve encountered on the canals suggests they aren’t particular about keeping dry either. Besides which, a canal appeals to all the senses in wet weather, offering a richer range of watery sounds, smells and a more dynamic surface appearance.

The poem, titled ‘Outlook’ at one point asks ‘Do dogs tiptoe round the towpath’s big puddles?’ Where better to find out, than on the Isle of Dogs?”

When raindrops sweep in
to greet concrete and cobbles
and spatter on decks
and cagoules and umbrellas
do geese seek the shelter
of bridges and tunnels?

When the downpour creates
a barrage of bubbles
which shatter reflections
and radiate ripples
do dogs tiptoe round
the towpath’s big puddles?

Rain sings one refrain:
no storm lasts forever
but when forecasters promise
a rise in air pressure
do fish watch the skies
for a change in the weather?

Read more about the Canal Laureate

The Eve of St Agnes Read-Along