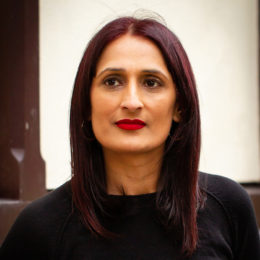 The Poetry Society is delighted to announce Saiqa Khushnood as the winner of the 2019 Peggy Poole Award. Now in its third successful year, the Award is a talent development scheme for poets based in the North West of England.

Saiqa Khushnood is a British Pakistani writer living in Manchester and a 2016 graduate of the Manchester Metropolitan Writing School with an MA in Creative Writing. Saiqa said of winning the Award: “It’s an honour to have won the Peggy Poole Award. I’m delighted and a little overwhelmed. I want to thank Malika for giving me this exciting opportunity and look forward to beginning my mentorship.”

The writer and poet Malika Booker, who judged this year’s Award, selected Saiqa from over 450 poets in the North West of England who entered the 2019 National Poetry Competition. An experienced teacher, founder of the writers’ collective Malika’s Kitchen and the Royal Shakespeare Company’s inaugural poet-in-residence, Malika praised Saiqa’s writing, commending her as a strong and exciting new voice in poetry. Malika said: “I chose Saiqa’s poems because of the potential and ambitious nature of the work submitted. I was impressed with the subject matter and themes that the poet tackled, and could see the possibilities for the development of her voice and poetics that mentoring would have.”

The Peggy Poole Award helps emerging writers develop their craft, and gives poets in the North West of England the chance to win a year of mentoring from a leading poet, running alongside the National Poetry Competition. The award is in memory of the poet and broadcaster Peggy Poole and made possible thanks to the generosity of her extended family and many friends.