parroting miles & miles of trouble. dirt roads going nowhere or
to a lozenge pattern: evidence of local color hiding something all

over the place in the same kind of building. other times, we find
ourselves on a plane over a large body of water & the headphone

jack defective. yet, if we complain, compensated only with a wink
& reminder our seat cushions float. was it late afternoon saturday?

you were wearing the t-shirt we both like: i can’t, i’m waiting for
godot & the kid on the bus asked, what’s go dot? we can choose

to loiter in the past: munich, on some straße, trying to decode
menus to avoid eating der blaue reiter for the 4th time this week.

breathing a shade of cinnamon we weren’t sure existed. & birds
again, only this time crows, rowing in an iron· sky & mispronouncing

klee! klee! klee! ten-thousand foot view is the distance we want
to be seen by: not a river wandering to find more river. scar tissue

passes for meaning. gristle: gist. police talk to their shoulders instead
of using them to brachiate. we all chose to throw rocks over arboreal

locomotion. a trifle that springs to mind is catching fish with balls
of white bread. we wonder if there’s pond life with this shape

that hasn’t been discovered & can be named for a relative who
botched their days. eventually we succumb to tabula rasa & sell

the suburban. love is noticing the eyes of another being picked
up in a tie. everyone improves in the proximity of our affection

Commended in the National Poetry Competition 2013.

Filmpoem by Ginnetta Correli, commissioned in collaboration with Alastair Cook and Filmpoem.

From the judge: 'The abundance of ideas and images in this charged montage of a poem made it stand out from the crowd. From the police who ‘talk to their shoulders instead / of using them to brachiate’ to the phoebes who ‘erase moths / from clover’, the poem sifts out luminous gems from the detritus of existence to offer an elliptical commentary on the choices we make for love.' Jane Yeh 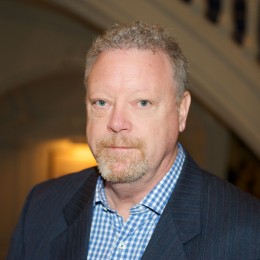 Ken Taylor, commended in the National Poetry Competition 2013, lives in North Carolina. He is the author of the chapbook, first the trees, now this (Three Count Pour, 2013). His poetry has appeared in Hambone, VOLT, The Offending Adam, Blackbird, 3:AM Magazine, OCHO, Verse Daily, elimae, MiPOesias and other titles.