The records show that in Shanghai
at the end of the Yuan Dynasty,
the year 1364, a glassblower blew
a mermaid that came to life, and swam
away. And in Cologne, in 1531, a team
of glassblowers blew an orchestra,
instruments and all, and these played.
Then on Hokkaido, in 1846, a blind
monk blew his own Buddha to pray to,
and the next day he was able to see.
In Natchez, in 1901, a glassblower
blew a paddleboat with gamblers in it,
one of them lying dead. And in Oaxaca,
in 1929, a small version of the Sierra
Madre was blown, with golddiggers
on its lower slopes, and the whole
town filled with gold. In Letterkenny,
in 1965, a woman blew a flock
of glass sheep, wool and all, each
of them with a tinkly baa. In 1993,
in Séte, the harbour glassblower
blew a lighthouse with its own light,
and in 2004, in Timisoara, three
glassies blew a new solar system
that they let float up and away. 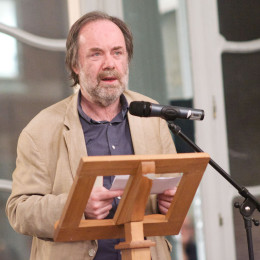 Matthew Sweeney was joint second in the National Poetry Competition 2010. His many collections include Black Moon, Sanctuary and The Bridal Suite. His children’s collections include Up on the Roof, The Flying Spring Onion and The Night Post. He is co-author, with John Hartley Williams, of Writing Poetry and co-editor, with Jo Shapcott, of the anthology Emergency Kit. His latest publication, Horse Music (Bloodaxe, 2013), was the winner of the Pigott Poetry Prize in association with Listowel Writers' Week and a Poetry Book Society Recommendation.